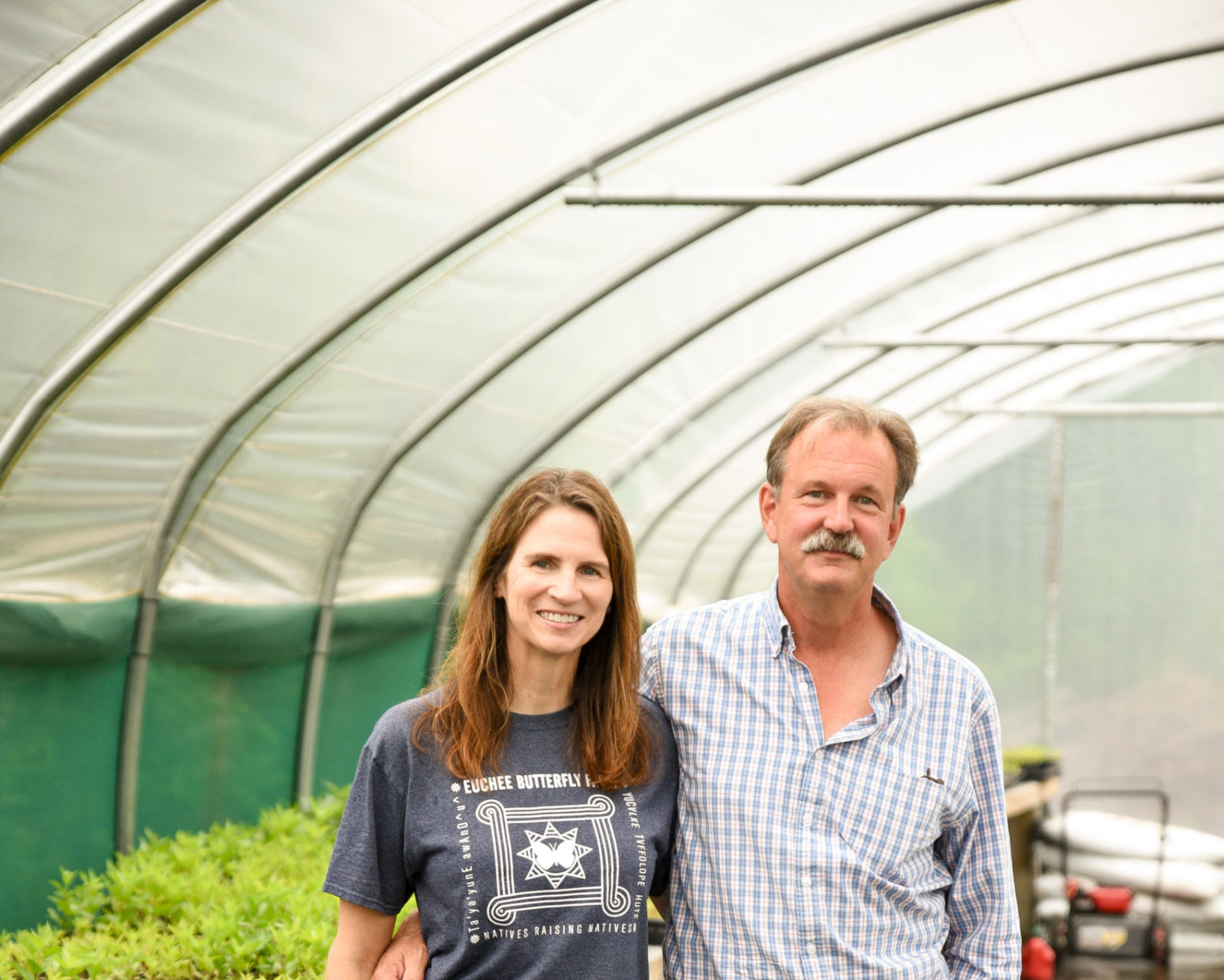 A habitat preservation farm offers a safe haven for butterflies

Jane Breckinridge is a fifth-generation farmer in Leonard, Oklahoma. The land she lovingly tends is a 160-acre allotment that was deeded to her great-grandmother, Neosho Parthena Brown, in 1899. Brown, a woman of Euchee and Creek descent, was the daughter of the last Euchee Chief, Samuel W. Brown.

“It’s very special to farm this land which has been passed down from woman to woman for five generations. It feels very connected to share in that.”

Though she is not the first to care for the Oklahoma soil generations of her family have called home, she is doing it in a new way.

Breckinridge considers it a calling to protect and restore some of God’s most beautiful and delicate creatures. Together with her husband David Bohlken, the East Central Oklahoma Electric Cooperative members have made it their mission to restore their rural farmland—one butterfly at a time.

“I realized that it took 14 years to grow a tree and 14 days to raise a butterfly and I’d make the same amount of money doing both,” he says.

Twelve years ago, Breckinridge gave up a career in publishing and the pair moved from Minnesota to Oklahoma to start the Euchee Butterfly Farm. The farm has a two-fold mission: to produce butterflies for commercial sale and to restore butterfly habitat in Oklahoma.

Bohlken, an economist by education, says he keeps the lights on at the farm by selling butterflies—a $70 million industry in the U.S. annually. With only 100 full-time domestic producers, demand for the butterflies outweighs supply and many must be imported from Costa Rica, the Philippines and Tanzania.

The Euchee Butterfly Farm produces butterflies for flight houses in museums, zoos, and at state fairs. They also sell caterpillar kits to schools for students learning about the metamorphosis of a caterpillar into a butterfly. The farm recently filled an order for Integris Hospital in Oklahoma City for a butterfly release ceremony celebrating 800 cancer survivors.

Like any type of farming, Bohlken says their operation is a seven-day-a-week commitment.

“Butterflies are continually laying eggs. When the caterpillars hatch, they need to be fed—a lot,” Bohlken says. “They are eating machines.”

“The ‘Very Hungry Caterpillar’ is a true story,” Breckinridge adds with a laugh.

Fourteen days after hatching, the caterpillars have increased in size by 2,000 times and are ready for their transformation into a butterfly. Once metamorphosis is complete, the cold-blooded insects are chilled and packaged while in a state of dormancy and express-shipped to their destination in a cooler.

“It’s good for economic development in rural areas because raising butterflies is sustainable and eco-friendly,” Breckinridge adds. “When you raise butterflies, you work with nature rather than against it.”

In addition to Bohlken’s work of raising butterflies, Breckinridge, a Creek citizen, is working with Oklahoma’s tribes to restore butterfly habitat.

At the Euchee Butterfly Farm, they raise a dozen native species including the beloved monarch. She notes that Oklahoma is located on the high-traffic flight path of the monarch’s bi-annual migration.

Each fall, monarchs migrate from the Northern and Midwestern states and journey southward to overwinter in Mexico. As they make the 2,000-mile flight, monarchs stop in Oklahoma to feed on nectariferous plants.

“They are one of only five migratory species in the world that gain weight during migration,” Bohlken says.

They will need the energy from plant nectar to survive through winter dormancy.

In the spring, they begin migrating back to the northern breeding areas. Many of the monarchs, once again, pass through Oklahoma, this time using native milkweed as a host for laying eggs as they travel north. The butterflies that make the southward migration the following fall will be three or four generations removed from those who made the journey the previous year.

In recent years, drought, habitat destruction and fragmentation, and the use of broad-leaf herbicides have resulted in an alarming decline in the monarch population.

“The monarch is going to become endangered in the next 15 years,” Bohlken predicts.

Part of Breckinridge’s work in rebuilding butterfly habitat has been establishing a seedbank of 154 native wildflowers. They collect the seeds in a sustainable manner, process them and distribute them to their tribal partners. Though the system is laborious, the seedbank has become a vital resource for those working to restore indigenous vegetation.

“The Chickasaws have done more than anyone in Oklahoma for the monarchs. They have planted and distributed more than 40,000 milkweed plugs,” Breckinridge says.

The Euchee Butterfly Farm also hosts frequent trainings for the tribes. They are breaking ground on a new building, expected to open next fall, which will include a flight house as well as space for educational sessions.

Beyond the tribes, rural citizens are coming to realize they have a role in butterfly preservation.

“Rural Oklahoma is going to be a lynchpin in saving the monarchs. Urban and suburban yards are not enough. It’s going to take rural landowners,” Breckinridge says. “They need our help or we are going to lose the species.”

Bohlken says three members of the Texas Cattlemen’s Association recently visited the Euchee Butterfly Farm to find out how they can help to preserve the monarch.

“These three old cattle guys realized what is happening and wanted to do their part,” he says.

Ranchers often eradicate milkweed because some varieties are toxic to livestock. However, Bohlken says animals sense it is toxic and will avoid consuming it. Growing milkweed can actually improve the quality of pastureland because the roots grow 17 to 18 feet into the soil and carry water and nutrients to the surface.

One way rural landowners can support monarchs is to replant native varieties of milkweed and other nectar-producing plants. Those who do so can register their habitats as official Monarch Waystations at monarchwatch.org, for a small fee.

“Rural people have an important role. They pay closer attention to what’s going on outside the window,” Bohlken says. “I haven’t talked to an 80-year-old rural Oklahoman who hasn’t seen the changes. You’d think they’d be younger, but it’s been those who are 70 and older who want to help.”

Though saving the butterflies is a difficult venture, it’s one Breckinridge and Bohlken undertake daily with passion and gratitude.

“Raising butterflies has been a dream job. It’s a calling to protect and restore God’s creatures. It’s nothing short of miraculous every time I see one come out,” she says.

“I can’t think of a better way to use my great-grandmother’s land.”

Monarch butterflies by the numbers

Category: Oklahoma Stories
Back to all stories
Top: Jane Breckinridge and David Bohlken own the Euchee Butterfly Farm in Leonard, Oklahoma.