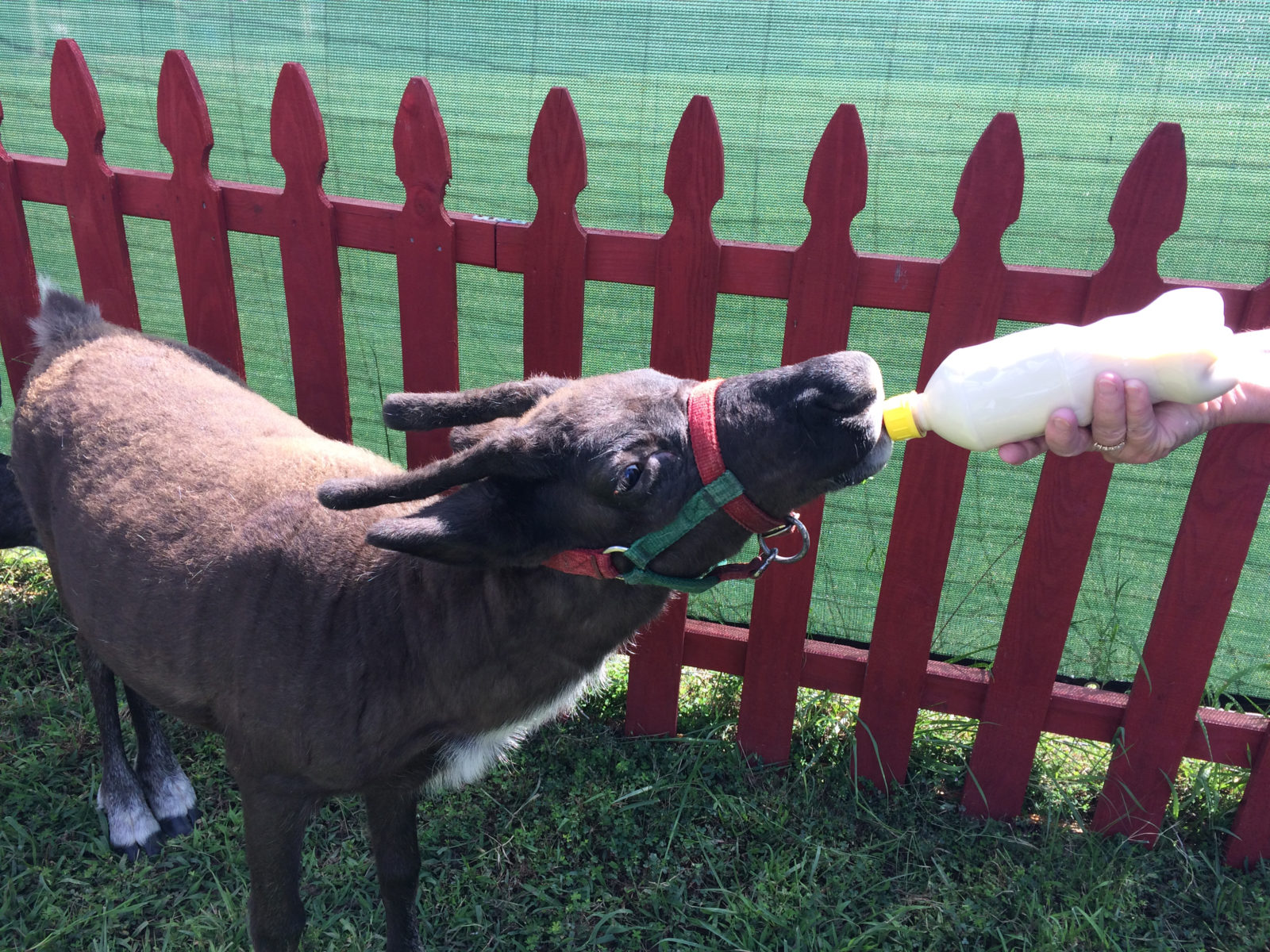 Nick Ledbetter and his family were visiting the Polar Express Christmas event in Bristow, Oklahoma, two years ago when his nine-year-old son, Parker, made a comment which began a new venture for the family.

Ledbetter thought that was an interesting observation.

“The first thing I did,” Ledbetter says, “was go to Google to see if these animals were even real. Once I found out they were, I started looking for an organization so I could learn about reindeer.”

Ledbetter joined the Reindeer Owners and Breeders Association and went to a national meeting in Indiana. By the end of the trip, his decision was made.

There were hoops to jump through. He had to apply for a license from the USDA and another permit from the Oklahoma Department of Agriculture. Then there was a waiting list.

There are few reindeer in the lower 48 states. Most are descendants of Alaskan herds. Ledbetter says, smiling, that his came from the North Pole—by way of Michigan.

The family plan for the reindeer centered on the Polar Express celebration in Bristow—Crystal and Nick Ledbetter’s hometown. Nick’s parents, East Central Oklahoma Electric Cooperative members Billy and Susan Ledbetter, raise cattle and horses on the family farm near Slick, Oklahoma, where the reindeer would be kept.

Finally, in June 2016, Ledbetter sent off a check for four reindeer. That afternoon, he received shocking news. It was announced that Bristow was losing the Polar Express.

I’d been saving money for 15 years, waiting to find something I wanted to be a part of,” he says. “For several weeks we didn’t have any idea what would happen.”

Fortunately, Stillwater picked up the ball and within a few weeks announced that they would host the Christmas event. Ledbetter called Cristy Morrison, CEO of Visit Stillwater (the Stillwater Convention and Visitors’ Bureau).

“I told her I might be someone she’d want to talk to because she had the Polar Express and I’ve got real, live reindeer—and we became best friends,” he says.

The Polar Express train was the star of last year’s Christmas activities in Stillwater and the reindeer were a special added attraction. They were displayed in a tent along with an antique sleigh and tables where children could write letters to Santa.

“Reindeer are such an iconic element of the wonder and magic around the holidays,” he says. “To have an up-close encounter with an animal that conjures childhood memories and such nostalgia was a treat for Stillwater visitors.”

This year, Ledbetter increased his herd to five with the addition of Rose, a baby who was born on April 1. While the Ledbetters usually transport their reindeer in horse trailers, they reindeer-proofed the back of Crystal’s Arcadia and brought Rose back from Michigan in the car. They had to put a clothes bar across the back of the front seats because Rose really wanted to be up front with them.

The reindeer earning season is short—about six weeks in November and December—but the reindeer must be cared for year-round. Special food is shipped in from Michigan and the reindeer receive regular vet care and inoculations. Summers can be particularly tricky. On hot days, they spend most of their time under fans in the barn. Two of the reindeer are currently in Michigan to be bred. They hope next year’s herd will feature seven animals.

A larger number of reindeer make more appearances possible. They are available for special events like parties, promotions and corporate get-togethers. Two of the reindeer appeared in New Orleans last year for the New Orleans Saints’ Family Christmas party.

Despite the great interest in the Polar Express last December, the Express will not be back this year. However, Stillwater is planning a bigger and better Christmas Wonderland with an ice skating rink, Santa’s Workshop, carriage rides and food trucks. The reindeer will appear there, too—and visitors will get to see them for free.

Other events on the Ledbetters’ schedule include appearances at Arvest Winterfest in Tulsa and Bristow’s Christmas Unwrapped. In addition to the 1892 sleigh Ledbetter used last year, he has a beautiful, restored 1888 Portland Cutter. It has wheels in addition to the traditional runners. Ledbetter’s dreams for the future include having Santa riding in a sleigh pulled by reindeer in Christmas parades. Most Oklahoma Santas have to ride on floats or fire trucks. Wouldn’t it be cool to see Santa with a real sleigh and reindeer?

GET IN ON THIS:

√ Both male and female reindeer have antlers.

√ Reindeer are the only mammals proved to see ultraviolet light, helping them see in the bright white of the Arctic.

√ Reindeer have “beards” on their chests. These channel water away from their bodies when they drink and dribble.

√ Reindeer have adaptive hooves. The pads are soft in the summer for traction on moist ground, but shrink in the winter, leaving sharp hoof edges to aid in traction on ice.

√ Reindeer’s tendons click when they walk, enabling them to stay with the herd in a blizzard.