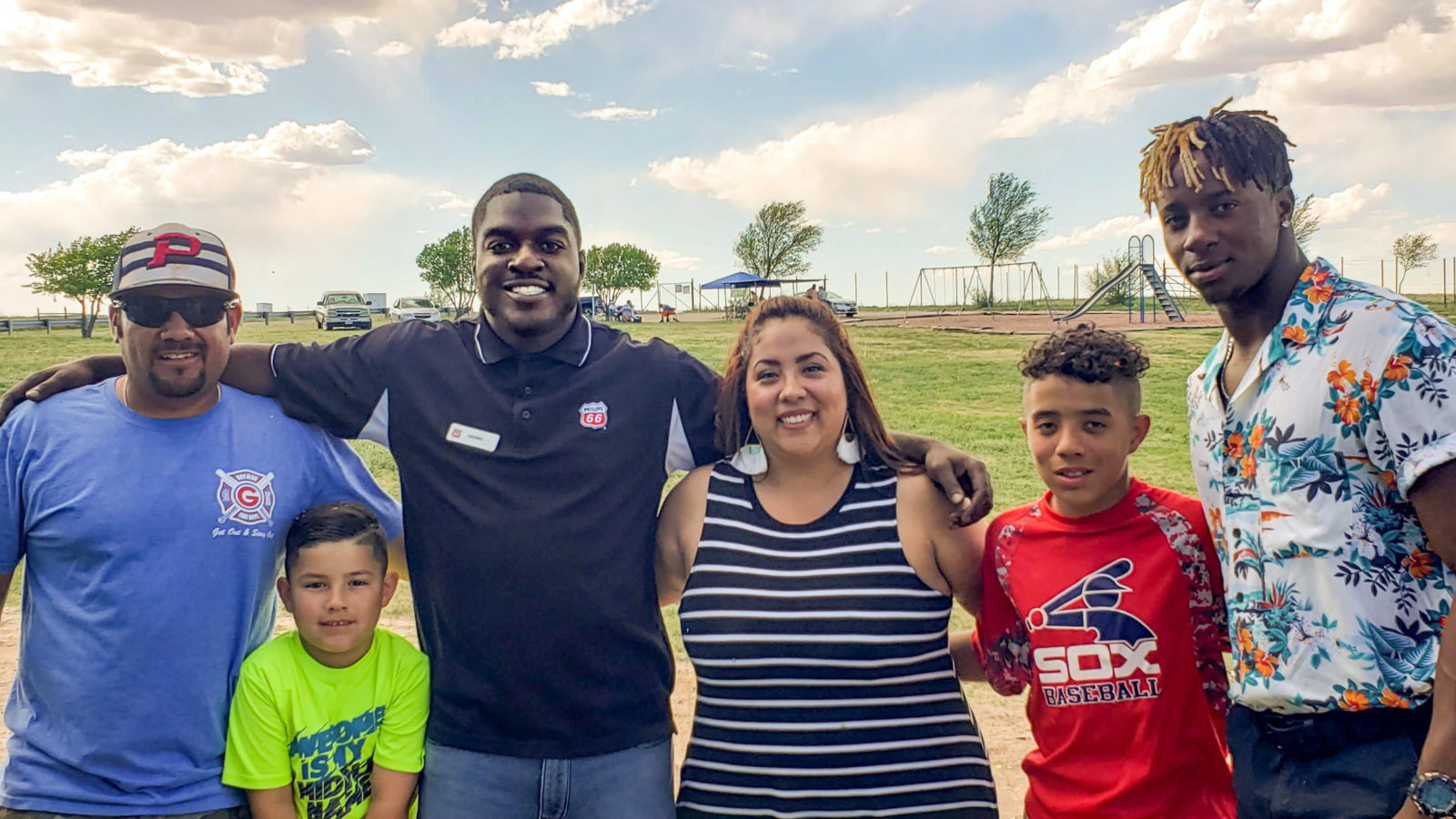 Neptune Joseph moved from Miami, Florida, to Goodwell, Oklahoma, in the fall of 2012 to attend Oklahoma Panhandle State University (OPSU) on a football scholarship. It wasn’t his dream college. His stubborn streak and a twist of fate brought him there. He suffered culture shock when he arrived in the sparsely populated locale. Imagine moving from a city with more than 400,000 people to a Panhandle town with 1,200. It was a drastic change.

Joseph’s freshman year was challenging as he adjusted, but he was determined to stay through his sophomore year. After that, he hoped to transfer to a larger school. That was until he met Melyn Johnson at one of the basketball games where he was volunteering as a water boy. It was the beginning of a friendship that would later become family.

Johnson, a member of Tri-County Electric Cooperative (TCEC), is an OPSU alumna and longtime fan.

“I invited Neptune to go with me to Naifeh’s Steakhouse for my son Justin’s birthday party,” Johnson says. “That is odd for me. I had known other players for years and never invited them to family things.”

“The whole family was there—Lisa, Missy, Granny, everyone,” Joseph says. “Her family made me feel so welcome, especially the grandkids. They gravitated toward me the most.”

Johnson says Joseph continued accompanying her to family events and other activities.

“He started going to church with me,” she says. “I picked him up. He didn’t miss Sundays. I enjoyed our conversations for the 20 miles to church and back. He would eat lunch with us after church—all that stuff. He started to call me Mom.”

Johnson is the director of Main Street Guymon. Sometimes Joseph and other football players would visit her at the office. One day she overheard them mention that family members get four free passes per game. This conversation planted the seed for what would become the Aggie Families program.

Johnson contacted Russell Gaskamp, who was the football coach and a member of the Guymon Rotary Club with Johnson. She asked if she could connect local families to football players. Johnson says Gaskamp was enthusiastic about the idea.

Johnson recruited local families with interest in college sports and Joseph recruited players who wanted to take part in the new program. With that, the Aggie Families program took off in the fall of 2013.

Victor Esparza, a TCEC member and the athletic director at OPSU, says the Aggie Families program has been good for the university and its players.

“It’s been a great benefit to our athletes, especially our international kids and our kids that live far from home,” he says. “They get fans at the game. Every once in a while, they get home cooked meals or other help from their Aggie families.”

“I know we’ve had a few Aggie families walk with their athlete during senior night,” Esparza says. “One player’s family lived in Spain, so her Aggie family walked with her when her family could not. That was pretty cool. It’s been huge for our department.”

Esparza adds that the program has helped in recruiting athletes too. He says they tell potential players there’s an opportunity for them to have a host family, which eases their mind a bit about being so far from home.

JJ Palacios, a TCEC member who lives in Guymon, has hosted three players from OPSU in recent years. He and his wife Noemi and their two sons, Justin, 12, and Julian, 9, have enjoyed spending time at family meals, holiday gatherings and cookouts with their players.

“It has helped our family to host players, especially with my two boys,” Palacios says. “The boys looked up to them. It meant a lot to my boys when our Aggie players would come watch my boys’ games. I think it’s an awesome program. What Melyn is doing is great.”

Although Joseph has since graduated from college, he has stayed in the area and continues to maintain close ties to his ‘Aggie mama’ and her family.

“If anything happened to me, she is the first person I would call, because I don’t have anybody else here,” Joseph says. “She is willing to go through obstacles for me that other people wouldn’t. To me, that’s the best part about the Aggie Families program—knowing you have that one person who has your back, no matter what.”

Johnson continues to facilitate the Aggie Families program today. It has expanded from football to include basketball, soccer, baseball, volleyball and other sports at OPSU. The program helps players connect to the local community in ways they probably wouldn’t otherwise.

Joseph may move away in the future, but he’s thought it through. He’s looking at cities with direct flights to Miami as well as within driving distance to the Panhandle. After all, they’re family.

JuliAnn Graham, an Oklahoma Living contributor, is the communications manager at TCEC.