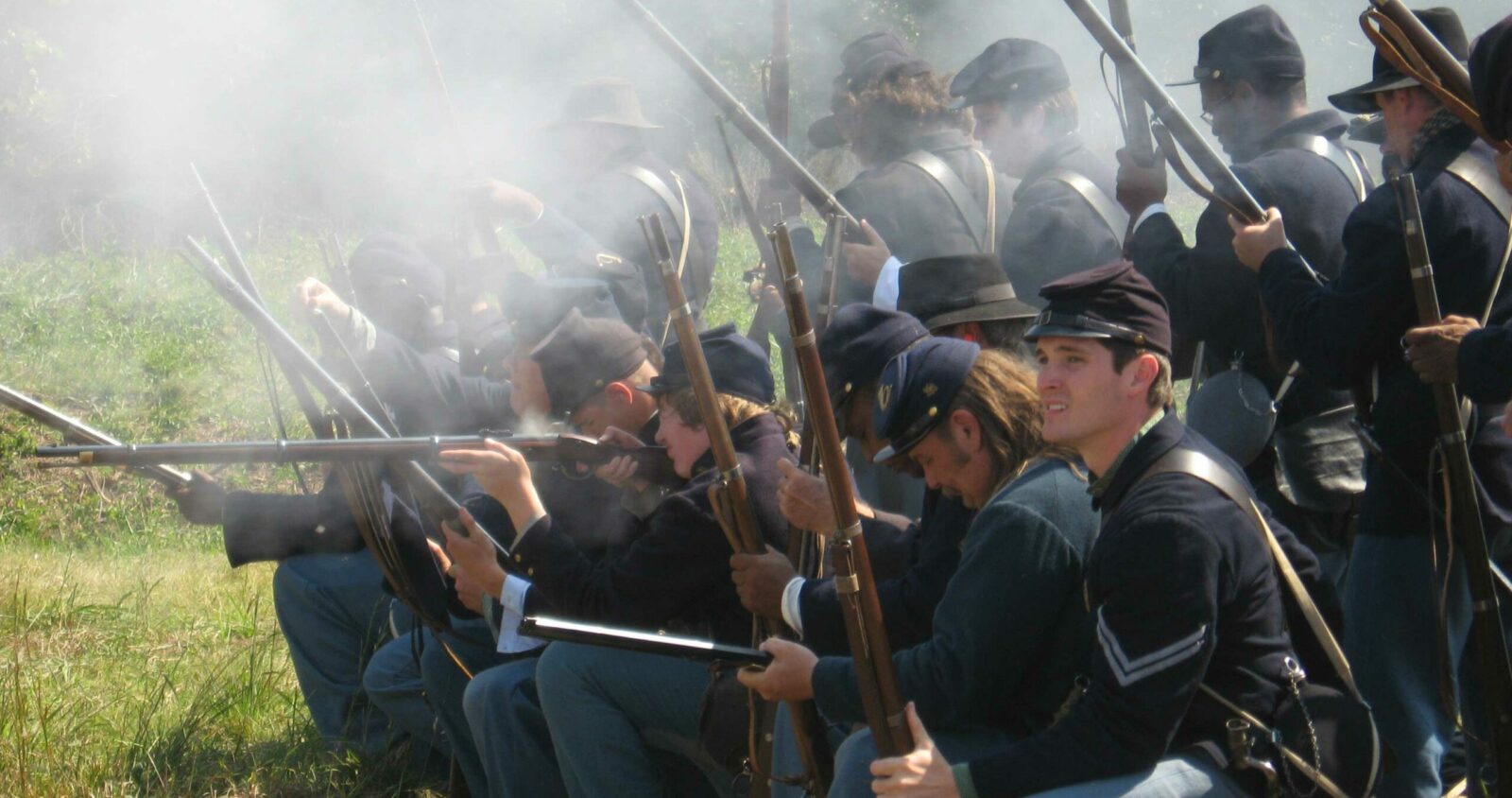 Civil War site historians bring the past into the present

Perhaps to some Oklahomans, the American Civil War happened in another time and another place — Gettysburg, Fort Sumter, Harper’s Ferry, Atlanta. But the events occurring on 1,500 acres of rural land northeast of what is now Checotah, Oklahoma, prove it happened here, as well.

For decades, the site where the consequential Battle of Honey Springs occurred got little, if any, attention.

“I guess nobody thought about it being an important place,” says DeLois McGee of Checotah, president of the Friends of the Honey Springs Battlefield Park and longtime advocate for the site’s metamorphosis.

It was there on the frontier known as Indian Territory   ̶  159 years ago on July 17, 1863   ̶  that nearly 9,000 Confederate and Union soldiers engaged in military combat. Of the 107 Civil War confrontations that occurred in Indian Territory, the Battle of Honey Springs was the largest. The dead numbered 167 and the victory went to the federal forces in a war slowly turning to their advantage.

Of key significance was the fact that most of the soldiers on both sides were either Black, Native American or Hispanic in an otherwise predominantly white man’s war. It was perhaps the first time Black soldiers were trained, fought and won in the war whose outcome could end slavery for their race.

The Native American soldiers came from 10 tribal nations  ̶  making it a civil war within a civil war   ̶  and that internal strife eventually resulted in dismantling the tribal governments.

For decades, the large battlefield   ̶  about the size of the University of Oklahoma campus   ̶  was poorly marked, overgrown with vegetation and barely visible down a dirt road, or no road at all.

“I grew up in Oklahoma, my family has deep roots in McIntosh County where much of the Honey Springs Battlefield is located, yet I had no idea that the Civil War happened right there,” says Kathy Dickson, Museums and Historic Sites Director for the Oklahoma Historical Society (OHS).

As the nation marked the 100th anniversary of the Civil War in the early 1960s, a local group and a few history buffs began dreaming of lifting the site out of obscurity. The first segment of land was purchased in 1967 and the site received National Register of Historic Places status in 1970. The Friends of the Honey Springs Battlefield Park
group formed in the late ‘80s, creating strong ties to the Oklahoma Historical Society. Landmark signs were first placed in 1985 and trails were roughly created in the early 1990s. An important designation as a National Historical Landmark from the National Park Service came in 2013.

A $1 million center was built in 2017, and then it took another five years to acquire funding to complete the exhibits. On Nov. 5, 2022, OHS officially dedicates the visitor center’s new state-of-the-art exhibits. The event starts at 11 a.m.

“Watching it transition to what it is today, I was here before it started and the progress over the years has been amazing,” says Jerri Holder, office manager of the Checotah Chamber of Commerce and East Central Oklahoma Electric Cooperative consumer-member.

“Our hope with these exhibits is to fill the void in the history of the Civil War and even the participation of the Indian tribes,” says Adam Lynn, site director.

The visitor center sits on top of a hill and Lynn points northward to describe the layout of the battlefield for those wishing to either walk or drive the three-mile distance.

Park visitors can also start in the visitor center itself. Three large murals by Chickasaw artist Mark Larsen set the stage for learning about the battle. One room offers the chance to watch an informative video and another features a 3D multi-media dramatization of the battle. Mannequins dressed in gray or blue uniforms line the walls in active poses. Recorded voices of the words originally written by the soldiers who fought the battle are heard between background noises and lights mimicking gun blasts and cannon fire. The center is powered by the ECOEC.

According to historians, Indian Territory created a buffer between the Confederate state of Texas and the abolitionist state of Kansas. Native Americans were divided, however, with many siding with the Confederacy in retaliation of federal treatment over the years.

Confederate Gen. Douglas Cooper set up camp at Honey Springs, a stagecoach stop in the area of what is now McIntosh County. He had 5,100 troops and was awaiting reinforcements when the Union’s Gen. James Blunt challenged his control of the region with just 3,400 troops. Reinforcements didn’t come in time. Despite being outnumbered, Union forces had superior resources and more weaponry.

A Civil War re-enactment with 400 actors occurs every odd year on a weekend in November, and a memorial service is held on the date of the battle each year.

Thanks to the combined efforts of many over the years  including the Friends group, archeologists, scholars, OHS, Oklahoma Department of Transportation, local banks and the National Park Service, the historic site features much more than just weathered signage in empty fields.

“The frequent comment from visitors is, ‘I had no idea,’” Dickson says.

The visitor center is open 9 a.m. to 4:30 p.m. Tuesday through Saturday and closed on major holidays.