Skip to content
Home // Stories // Oklahoma Stories // Beyond the Costume 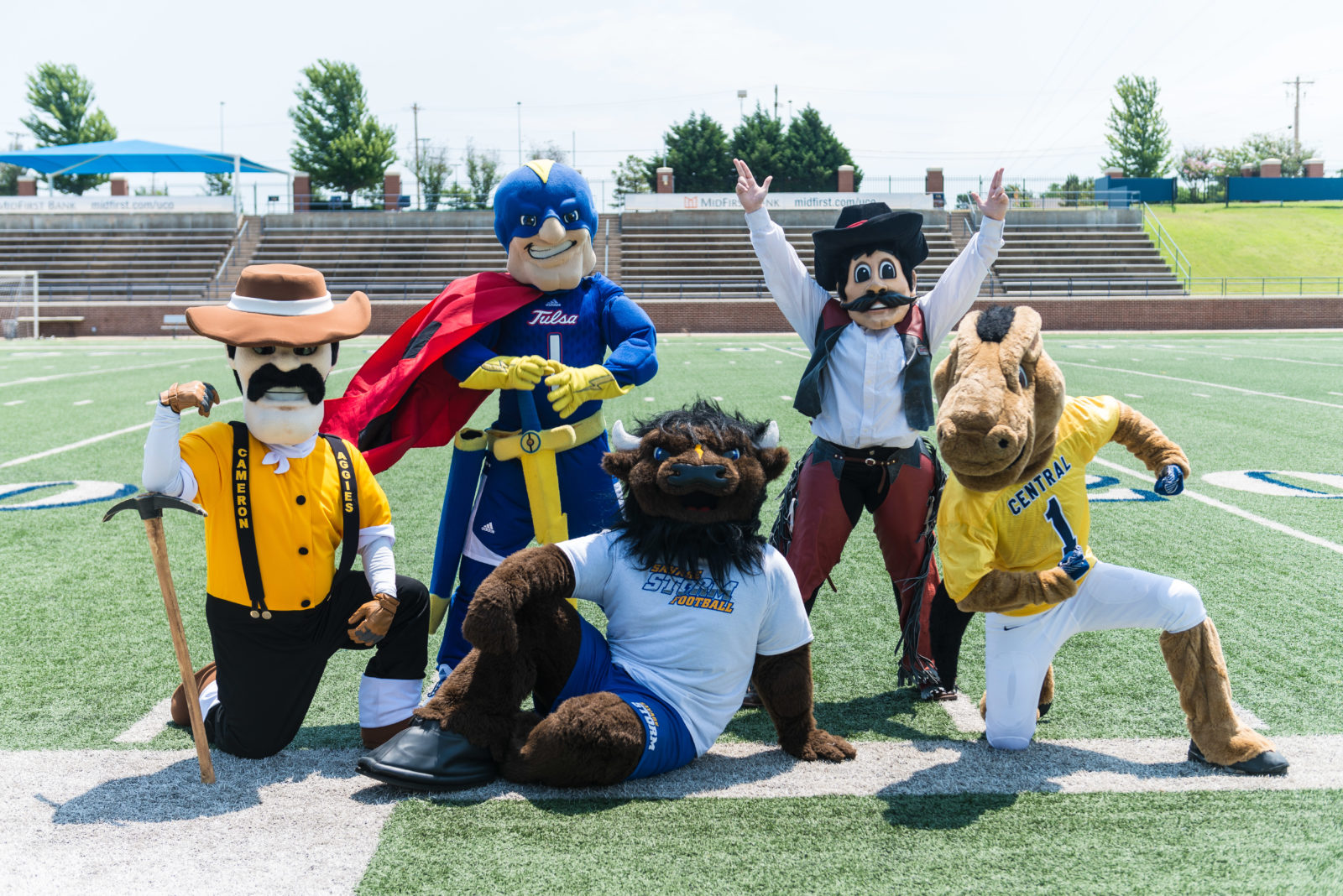 Oklahoma students with passion take on the responsibilities of university mascot involving themselves in athletics, communities, and volunteer events

From the bleachers at your favorite university, it may seem as though it’s all fun and games for the school mascot, but more happens behind the costume than the public gets to witness. Oklahoma’s university mascots are top students, upholding their grades, getting involved with school organizations, and volunteering outside of athletic obligations. Balancing their responsibilities is no easy task, but for these student mascots, putting smiles on peoples’ faces is a worthy undertaking.

Despite having been around for more than 100 years, some Oklahoma universities have mascot traditions which have yet to be finessed. This has given current student mascots freedom in developing their characters.

This is especially true for the Southeastern Oklahoma State University (SOSU) mascot, Bolt, created in 2013. With no precedents, Tristin Lackey has taken on his character with pride.

“I get to be myself in the suit,” Lackey says.

He is just one in a team of people who perform as Bolt for SOSU, and his team members confess to knowing when it’s him in the suit, as his enthusiasm is easy to recognize.

This enthusiasm is important to every mascot, and when Dave Staggs took on the role of Buddy Broncho at the University of Central Oklahoma (UCO), he changed the character’s persona to energetic and vibrant.

“No one was available to show me how to be Buddy,” Staggs says.

While the previous Buddy preferred nonchalance, Staggs enjoys the chance to be goofy, thinking of himself as a source of comic relief for the fans. He hopes this amiable side of Buddy continues when he is no longer the mascot.

Rowdy Ranger is a character experiencing more changes than others. With a new head and a new student in the suit, Rowdy is becoming more involved with Northwestern Oklahoma State University (NWOSU). Though her first year as mascot kept her busy, Karrie McLain wants to appear at even more events for the 2017-2018 school year.

As an Army veteran, Jason Terry of Cameron University (CU) has had a lot of time to devote to Ole Kim’s personality and appearance. Currently, he’s lobbying for a new head with a magnetic hat, which could be removed easily, especially during the national anthem.

“I think it’s disrespectful not to take the hat off,” Terry says.

The legend states Ole Kim was a Cavalry Scout in the military, an important detail to Terry in developing his character. Terry hopes this change is made sometime soon, whether he or someone else is playing Ole Kim.

“We want Captain Cane to be reflective of what we aspire to be at TU,” says Amanda Snider, Spirit Squad director at the University of Tulsa.

This means Cane has to be a physically active and mentally sharp character. You’ll find him involved in events around campus, athletic and volunteer programs included.

The challenge of creating a mascot’s identity is a personal experience, and each student puts his or her spin on their character, using that persona to engage with their student body and community.

For those inside the costume, everything changes when the mask goes on.

“It’s more than just putting on the suit,” Snider says.

Your gait is altered, your vision is impaired, and most importantly, your personality isn’t your own.

“It’s like acting,” Staggs says. “You have to be dramatic with your movements.”

Staggs’ relaxed and quiet personality changes when he’s Buddy. Getting acclimated to being someone else is a practice, but according to Staggs, it gets easier with time.

For others, it’s too easy to get into character, and the difficulty is found in getting out of character.

“I get so involved with Ole Kim, that my nose will be itching, and I’ll scratch his nose,” Terry says. “I won’t notice what I’m doing, but scratching Ole Kim’s nose makes my nose feel better.”

Terry has the most fun as the mascot when he’s playing the practical joker. Whether fellow athletes or Aggie fans, Terry will entertain anyone around.

Bolstering these alter egos further is the fact that so few people know the true identity of those behind the mask.

“It’s fun watching your friends from the stands or messing with them, and they don’t know what you are,” says Brooke Walton, who acts alongside Lackey as Bolt for SOSU.

Limited to those who work closely with student mascots and accidental reveals, many are unaware the person in the suit is a close friend, classmate or fellow club member. It’s refreshing for many; being in the suit awards a sense of freedom to act without the judgment of peers.

TU’s spirit squad director says it’s important for Cane to have a close relationship with the student body. Getting involved with everything campus has to offer is part of each mascot’s job description, but these students don’t consider it a chore.

According to Dakota Baldridge, who acts as Captain Cane at TU, being involved with his athletic department has been the highlight of his college experience, despite also being in a fraternity and other school groups.

Staggs has experienced as much as possible as Buddy, as have his fellow mascots. Theirs is a college experience unique to most, as they form close relationships with people involved in their universities and get a behind-the-scenes look at major university events.

While these students feel rewarded by their time as mascots, it’s a mutual relationship with their schools. As Bolt, Charles Jackson feels he has contributed to SOSU’s history and to his peers’ scholastic experience.

Between volunteering, leading spirit and setting positive examples around the community, these students give as much as they get.

A Passion for Others

The students behind the masks have traveled unique paths to becoming their school’s mascot, but they have more in common than a suit. Passing up positions on football teams and in sororities to volunteer at charitable events and lead school spirit at athletic events, it’s clear to see these students have a passion for people.

As a team at TU, the cheer and pom squads and the mascot do thousands of community service hours a year, keeping Baldridge busy throughout the year. These hours include visiting the Children’s Hospital in Miami during a bowl game trip, charitable alumni events, and recently, an event with Happy Hands, a Christian school for kids with hearing disabilities.

In fact, kids are a focus for each of these mascots, who seem to represent strength and heroism, like cartoons. Many kids don’t know there’s a person in the suit.

McLain, as well as her fellow student mascots, experience a lot of joy in interacting with children at games, schools and community events. According to Terry, kids were scared of Ole Kim at first, so he has spent his two years working on Ole Kim’s relationship with youth, doing class visits and playing games with his son’s pre-K class.

Children aren’t the only focus, however. In or out of the suit, these mascots care for the well-being of everyone around them.

“I love to put a smile on people’s faces,” Staggs says. “There’s a lot of negativity in life, and I want to combat that.”

Staying energetic is no easy task, but these students do it with pride. You can catch them at community and athletic events, and when you do, be sure to grab a hug, a high five or a selfie with them. They’ll be happy to share your excitement.