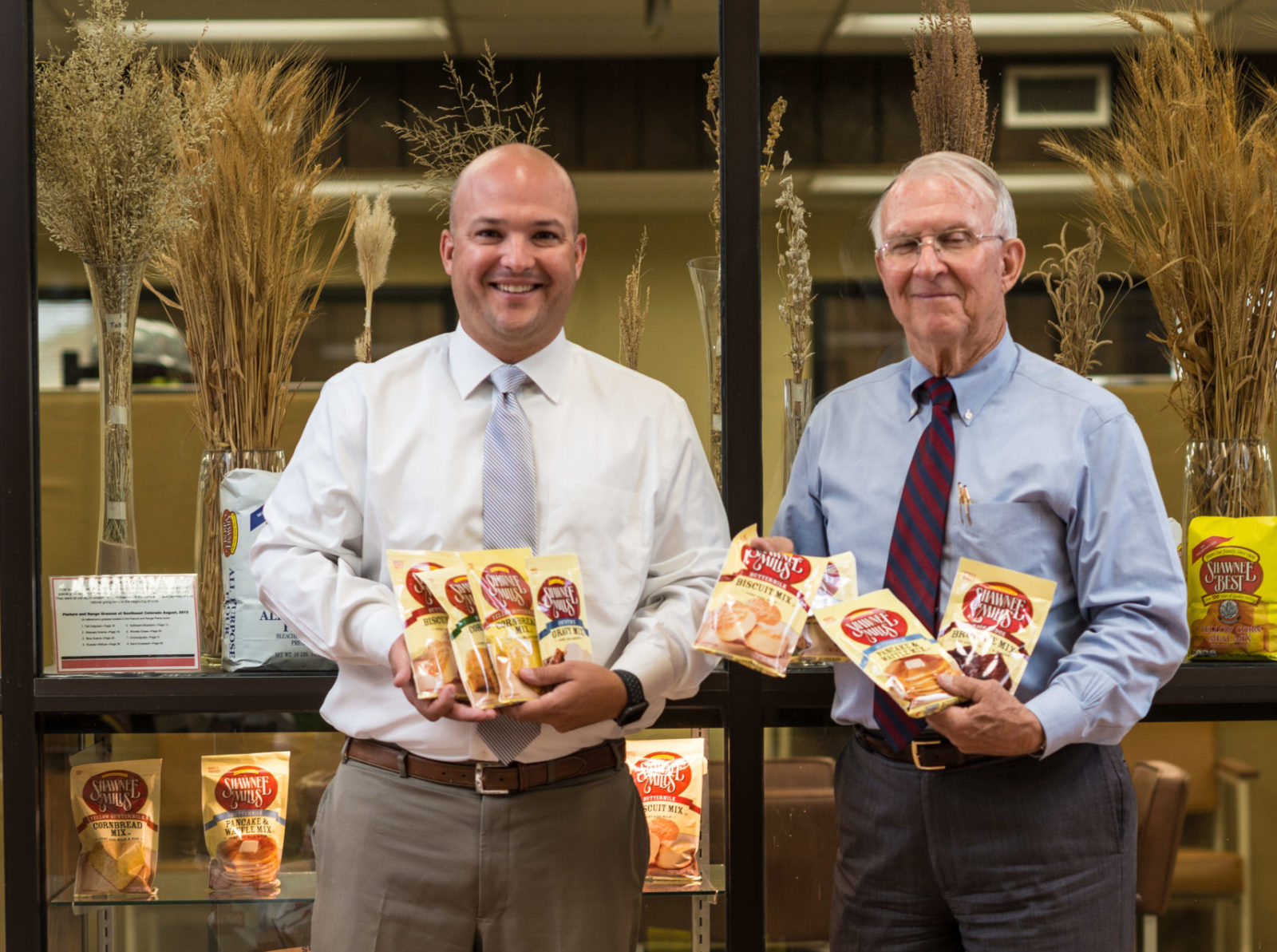 Shawnee Milling Company weaves into the fabric of Oklahoma History

If you take a peek into any Oklahoma pantry, you will likely find a package (or two) of Shawnee Mills products. From cornbread to pancakes and biscuits to gravy, the company has been milling mixes and flour for generations.

After more than 100 years of operation, the original miller’s third and fourth generations of family continue to make the mill a shining star in the buckle of the wheat belt. Through depression, wars, booms and busts, an unwavering commitment to Oklahoma families remains deeply ingrained in one of the milling industry’s most respected companies.

Like many stories of Oklahoma pioneers, it began with a land run. On May 23, 1895, 10,000 individuals drew allotments in the Kickapoo Land Run settlement. One of those hopeful land seekers was J. Lloyd Ford, who had traveled five days in a boxcar on an emigrant train from Michigan to begin his family farm. The Fords’ first home, a log cabin, was soon built by using the land’s native oak trees.

The original wooden mill was built four years earlier and had to be dragged across the North Canadian River. Pioneers used horses, ropes and skids to bring it to the current location in 1895. J. Lloyd used his life savings to buy that mill in 1906. He promptly renamed it Shawnee Milling Company and opened its doors for production a mere four days later.

J. Lloyd was an interesting and gentle guy, according to Bill Ford, third generation miller and chairman of the Shawnee Milling Company board. Instead of naming the company after his own family, he chose to honor his community of Shawnee, Oklahoma.

“He wanted the people to take pride in the company—it belongs to the people here,” Bill says. “We continue to name all our facilites after the town.To this day, we learn to take care of the mill because we take care of our families.”

J. Lloyd loved elevating people, and he especially enjoyed sharing his wood and food off the farm with the Kickapoo people. He and his wife also worked to carve civilization out of a rough area.

However, the settlement was still relatively new and law had yet to be established. Many of the locals fought to take the mill away from the Ford family, so J. Lloyd called on his Kickapoo friends for help.

“They came down in their full regalia and told the troublemakers, ‘Mr. Ford is our friend; you leave him alone,’” Bill says. “And they did. In that way, the Kickapoo saved the mill.”

The mill experienced two decades of growth and expansion, including the acquisition of the Okeene Milling Company which is still in operation today under the direction of Bob Ford, executive vice president and brother of Bill Ford. The mill has also faced great challenges.

In 1934, a terrible fire turned the mill into dust. Flames raged for hours and took all but two original fruit trees in the orchard. J. Lloyd had to, yet again, risk it all. He mortgaged everything from his house down to his clothes, but because of that sacrifice, the family was able to keep the land and the farm through the Depression while rebuilding the mill.

There was also a bright light at the end of the tunnel—electricity was coming.

“People don’t realize how hard things really were without electricity,” Bill says.  “Getting electricity was huge for the rural people.”

Thanks to Canadian Valley Electric Cooperative, based in Seminole, Oklahoma, the family farm received power following the Depression and the original farm is still on co-op lines today.

One of the many long-standing traditions at the mill is the cooperation with Oklahoma farmers. Shawnee Mills has nine wheat grain sourcing stations throughout western Oklahoma. The mill supplies employees at feed stores and grain sourcing stations.  These employees are active in the communities, interact with the farmers and work with them on innovative methods to grow the best wheat.

Shawnee Mills makes several specialty products right at the mill. They are able to source so much wheat variety across western Oklahoma because those needs can be met with Oklahoma wheat, according to Joe Ford, fourth generation miller and company president.

“We are proud to be making Oklahoma products, and even better we’re making it with Oklahoma grain,” Joe says.

Locally, the company is also able to receive Oklahoma corn because of their established corn mill in Shawnee. Local farmers within 50 miles of the Shawnee mill partner to provide quality corn, which is unique in this part of the country.

“Over the years the mill has provided a good market for them and they have in turn reinvested quality grain and helped develop a strong farming community,” Joe says.

One of those farms belongs to the Nowakowski family. For three generations, the family has evolved to include a diversified mix of cattle, corn, wheat, alfalfa and soybeans on their farm in McLoud, Oklahoma. According to owner Jacob Nowakowski, it’s a well-known fact among local farmers that Shawnee Mills values their product.

“We try to raise the best quality wheat and corn for them, because we know they’ll take care of us,” Nowakowski says.

The family sells 90 percent of their wheat and corn product to Shawnee Mills each season they can produce a viable crop. Beyond growing the product, Nowakowski says there are several intricate quality and safety tests before their grain is accepted to the mill.

“We sell to other big name national companies, but Shawnee Mills has the hardest quality tests to pass and for good reason,” Nowakowski says. “You know when you buy one of their products, you’re buying the best.”

Easy to make, fast to bake

From farm to package, it all starts with the quality of wheat. There is quite a bit of science behind the convenient packaging that allows busy bakers to “just add water.”

Shawnee Mills’ formulas must change to remain consistent. Not only are there industry changes, but the formulas adjust each season with the wheat crop and climate. The absorption rate and protein are examples of the many factors that go into making a good baking product.

“Every growing season is different because every flower is different,” Joe says. “We tweak our mill and recipes to make them function from one year to the next.”

Shawnee Mills will sample and grade each truck of wheat before categorizing it in the facility. The mill may blend a little wheat from Okarche, Minco or western Oklahoma to get the perfect blend of grains.

For example, a pizza pre-mix has a certain amount of rising crust and texture. Employees know before they mill the flour the grains that are going into it and what the performance will be at the end. They run test batches of wheat before running larger quantities at the big mill.

Walking through the mill, there is a mixture of old and new technology. You may see modified 90-year-old roll stands operating next to a new computer control system to look at yields efficiencies.

“We mix tried and true with new technologies,” Joe says. “We find that mixture keeps us grounded but also keeps us moving forward.”

Shawnee Mills products are available at virtually every Oklahoma grocery store.  According to Sam Garlow, executive vice president of the Foods Division, more than 1 million pounds of food products are made per day.

This is a point of pride considering the mill is one of the few independently owned mills left in the nation. Most have not been able to sustain or have been purchased and rolled into a national company.  Garlow attributes the continued success to the Ford family’s dedication and values.

“The Ford family has been committed to investing in the mill and making decisions with integrity,” Garlow says.  “The continued and long-term success of the mill is a testament to their character.”

Joe has seen the process from start to finish as he began his tenure with the company from the ground up. His first job was sweeping floors and stacking feed sacks.  Now directing the company, he looks to the employees to guide good decisions.

“I challenge myself to learn from the employees’ insights on how we can change our products,” Joe says. “We have a proud tradition and a proud history, but we constantly remind ourselves we are only as strong as the product we put on the truck today.”

A look into the past provides a glimpse into the future of the mill as well. Hanging in the offices is a “friendship treaty” signed in 2006 honoring 100 years of friendship between the Ford family and the Kickapoo tribe. The treaty states the two families will “continue friendship and kindness to one another for the next century.”

For Bill and Joe, they will never forget their family was treated with respect because they shared their resources. For those wondering what stands the test of time for 100 years, Bill’s answer is quite simple.

“It’s not how big you are or how successful you are,” Bill says. “When you share you transcend all difficulties, and that’s what this company represents.”

Category: Oklahoma Stories
Back to all stories
Shawnee Mills president Joe Ford and son Chairman of The Board Bill Ford