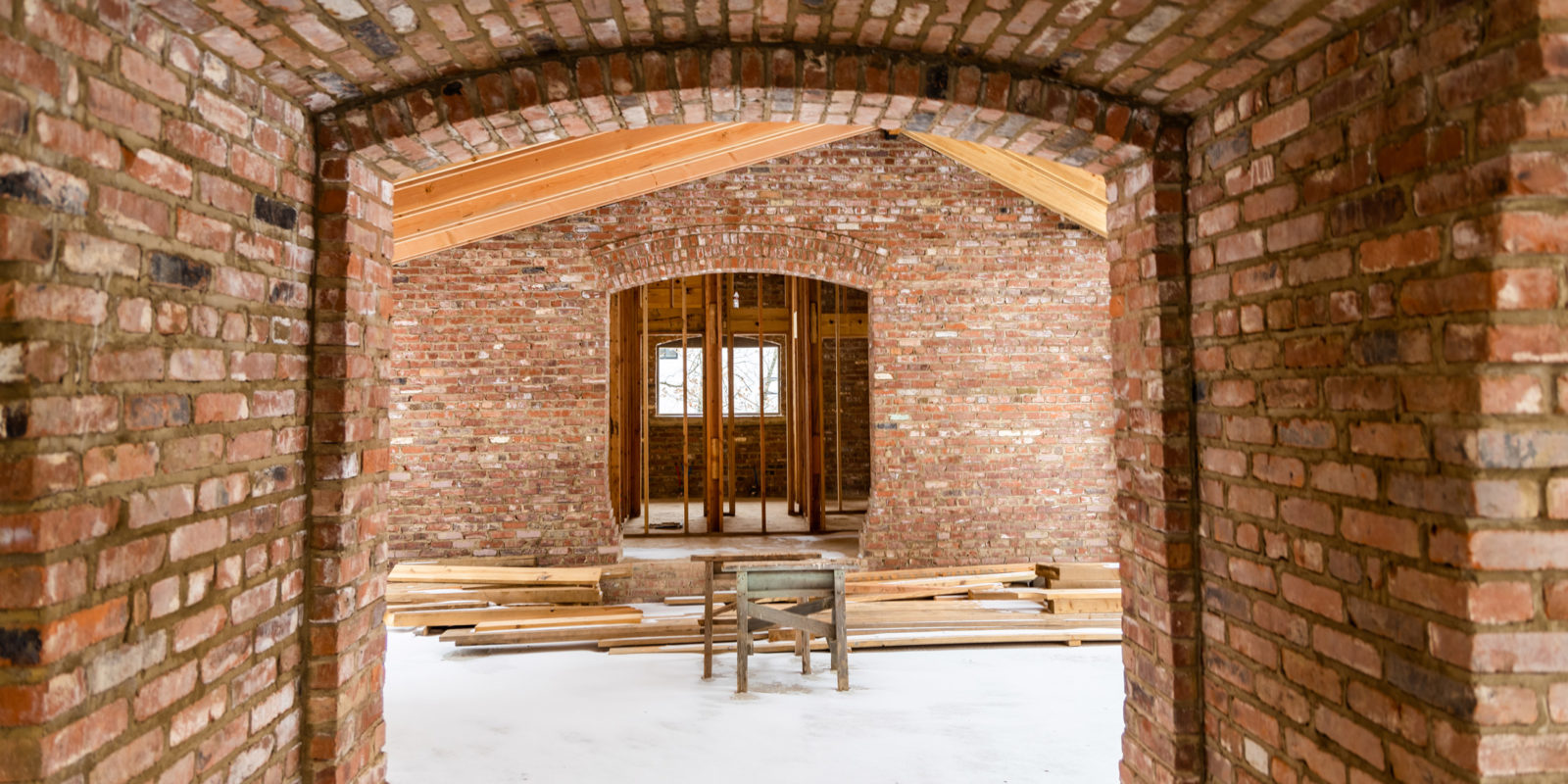 On a warm Monday afternoon, Clay Chapman is cleaning and marinating meat from ducks he hunted around his home in Carlton Landing on Lake Eufaula.

That’s just another sustainable element of Carlton Landing’s The Borough, a pocket neighborhood of small structural masonry cottages, which Chapman either built himself or were built using his methodology.

“Construction can be really complicated. There are lots of parts. You can look at a wall and wonder what’s behind a wall. But when you look at these walls, you’re seeing what the wall is,” he says, pointing at the walls of his home, which consist of only exposed brick and mortar. “There’s no mystery. It’s not pretending to be something it’s not, which is a pretty pivotal point in what we’re doing: the honesty of it.”

Chapman, a member of Kiamichi Electric Cooperative, is an award-winning builder who is passionate about structural masonry revival, a process that combines traditional structural masonry techniques with modern technologies. In structural masonry, brick or stone is used in such a way that the structure becomes self-supporting and load-bearing.

“Up until World War II, if you needed a masonry wall, this was the go-to way of doing it,” he says. “It wasn’t until after the war that the advent of the concrete block came into play. This also came with the optimism of modernism and the belief that all of the best answers came after the Industrial Revolution.”

Chapman’s passion for structural masonry revival has led him to create Hope for Architecture, an initiative that aims to “create buildings that will last for centuries” while spreading the knowledge with which they’re built.

“I want people to know that we can make a difference in what happens tomorrow,” Chapman says. “What it all boils down to is, somewhere between our grandchildren and their grandchildren, almost everything is going to have to be rebuilt. When that time comes, the world’s going to be a much more complicated place—with many more people and substantially fewer resources to work with. That’s the motivator.”

Before becoming a builder, Chapman was a sculptor and painter, having gone to school to study fine arts. Though he found it difficult to make a career as an artist, he quickly discovered he could still use his fine arts background to his advantage through construction design.

“I got started building barns and sheds, and then that evolved into horse farms. Then that evolved into pretty sophisticated, European-style stables,” he says. “This was all carpentry based. So I would throw myself at this, put my heart into it, then come back in a couple of years and the horses would have just destroyed these buildings.”

Because of that, Chapman had the idea to build the stables out of brick. Despite having no background in masonry, he says he took to the process quickly.

“I hired a crew to watch and learn from them,” he says. “I looked at brick as a sculpting medium and saw the bricks as pixels.”

Driven by his fine arts background, Chapman came to feel like masonry was under-realized.

“It was always in straight lines and flat planes, and I wanted to see curvilinear stuff and organic shapes happening with brick,” he says. “I began to build like I was sculpting something, and we had a lot of success.”

Eventually, a couple who knew of Chapman’s work reached out and asked him to build a house for them. Despite not being a home builder, Chapman built them a structural masonry home that became known as the Pierce/Lee House. Located in Cedartown, Georgia, the house won the 2011 Brick in Architecture Award from the Brick Industry Association.

“Constructed almost entirely of structural clay brick masonry, the house demonstrates both the versatility of brick and the honesty of materials like few other buildings conceived and constructed in recent history,” according to the Brick Industry Association. “The projected lifespan of the house is quantified in centuries rather than decades and has important sustainability and energy efficiency implications.”

For a decade, Chapman primarily did custom, high-end work. But after having children and beginning to see the world through new perspectives, he realized he was building homes he couldn’t even afford to live in.

“It’s going to last, but what kind of impact is it having in the world for my children? It’s not significant, these one-offs here and there,” he says. “I ended up building a little garden shed in my backyard with just a bunch of random, salvaged brick and a minimal design. When I finished, I just stepped back and I was like, ‘Wow, how many of my friends wouldn’t want to live in a house built just like this?’”

That was ground zero for Hope for Architecture. The initiative was founded in 2012, and within a year, Chapman says they were doing a major field test and a three-week thermal mass study with Clemson University.

Chapman moved to Oklahoma City in 2014 after Grant Humphreys, president of Humphreys Capital and founder of Carlton Landing, invited him to live and build there.

“We still hadn’t completely determined our best practices yet,” Chapman says. “I knew Oklahoma would be a great place to do that because, primarily in rural Oklahoma, we weren’t dealing with the inner city restrictions and fairly strict rules of building. We had more freedom to do the building exploration that we wanted to do.”

By 2017, the Hope for Architecture building model went to scale. They went from doing one building a year during the development stage, to three a year and continuing to increase production.

“Even though we’re in an upper middle class market, I think that’s where innovation typically has to begin. Then once you define those best practices and learn to streamline and improve those, you can begin to answer a wider range of the market,” Chapman says. “I’m convinced that, if we distill design enough, we can build anywhere from the one-percenters to low income housing.”

Dean Imel and his wife, Mari, bought a vacation home in The Borough in 2018. Imel says they heard of Chapman’s construction technique and wanted to walk through one of his homes. Though they were not looking to buy a lake house, Chapman’s homes reminded them of English cottages they visited when Imel was temporarily deployed.

“The thing that really sold us were these solid brick walls inside and out and the feeling that we got when we walked inside the house,” he says. “There was just this cozy feeling that you just don’t get in sheetrock.”

Imel was impressed with Chapman’s work, calling him a perfectionist who is personally invested in each home he builds. He says Chapman took the foundation of his home down to the bedrock and built the home in a way where the outside is “almost maintenance free.”

“Everywhere you go there are little details, because Clay’s thing is he’s a brick craftsman. He loves doing unique things with bricks like in his arch openings inside the house,” Imel says. “It’s just little details that maybe don’t jump out at you, but in the aggregate make you go, ‘Wow.’”

Though the building model is heavily based on older conventions, Chapman says they don’t rely exclusively on traditional ways of doing things. Instead, they blend the knowledge of the past with technology from today to create modern homes that address sustainability, rising energy costs and eventually housing affordability.

“Ultimately, we’re trying to come up with a highly sustainable way to create a built environment that will serve 30-plus generations,” Chapman says. “I think it’s incredibly selfish for us to be so focused on ourselves and to care so little about the checks we’re writing on other people’s futures. This is our attempt to invest in our children’s future. To leave them with something they don’t have to tear down and rebuild.”

In the same spirit of setting up future generations for success, Hope for Architecture also has an apprenticeship program. Individuals can work with Chapman for a year or two to learn the methodology, with the promise to go out into the world and build in that way.

“Apprentices are put in a situation where they have to, day-in and day-out, work. It’s through that immersion that you become proficient,” Chapman says. “I try to be there as little as possible. I‘m here to help with obstacles, but I want them scratching their heads trying to figure it out before I get there. It’s not only about learning the skills, but it’s learning how to improvise with the skills.”

Currently, a class of four apprentices—one from Oklahoma, one from Pennsylvania and two from Ohio—are taking the lead on building a home in Carlton Landing.

However, Chapman says there’s only so many people he can teach. He wants the knowledge he has of building homes to spread and make an impact on the way things are built across the country, so he’s also making a documentary.

“I thought, ‘Let’s tell people the story in a way that they can really enjoy and learn and be inspired by.’ So the basic story is following these four apprentices as they go from not knowing to knowing, but we have many ancillary stories about what I’ve talked about,” he says. “And we can’t film and talk about this project happening here without talking about what our lifestyle is here in Carlton Landing. So we’ll get into the fishing and hunting and all the things that the kids do.”

The documentary is still in the filming stages, but Chapman hopes it can reach a wide audience and spread the knowledge of structural masonry revival.

“Oklahoma has been very friendly to us and has been super receptive, and we have a great supporting market that has allowed it to get off the ground,” Chapman says. “We built this way in a number of states, but Oklahoma has by far been the most supportive of it and the best place for us to launch it.”