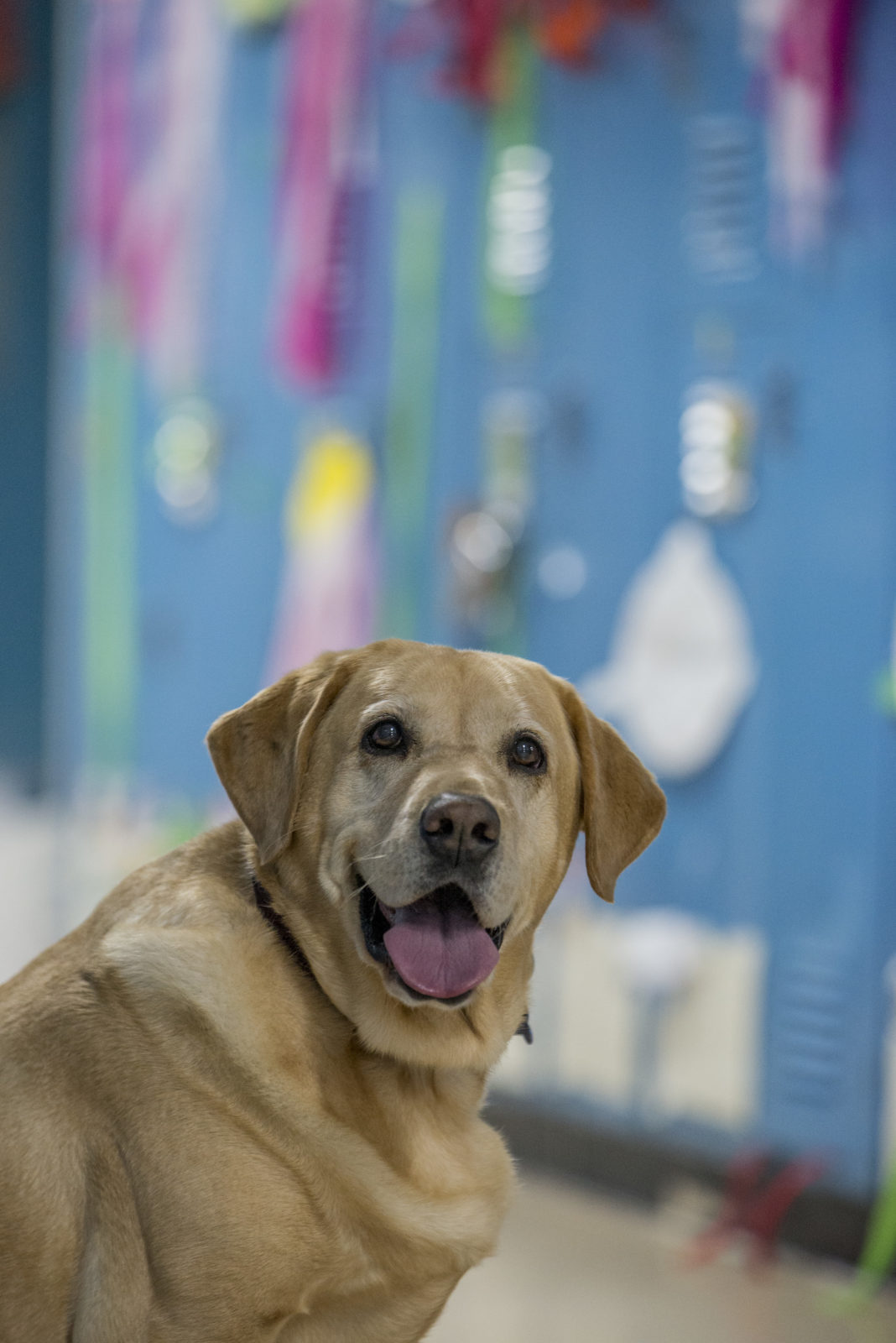 Living in rural Oklahoma, stray animals come with the territory. But when a female yellow Labrador mix showed up—emaciated and hungry—at a home five miles southeast of Stillwater, something was different.

Twenty miles away, it had been a typical fall Friday for Patrick Smith, pre-K through 12th-grade principal of Coyle Public Schools and a member of Central Electric Cooperative. The Class C Bluejackets were hosting an eight-man football game, and Smith was busy with the myriad of duties thrust upon a small-town school administrator.

“Football days are pretty long,” Smith says. “You start at 7:30 in the morning, and by the time you get done late at night, you’re really just trying to decompress. That decompression for me was Twitter, catching back up with the world. Scrolling through, I came across a photo of a yellow Lab on a friend’s feed.”

As it turns out, Smith had been searching for a dog, but not for a pet or companion.

“We’d been looking for a dog that would be a good fit in a school system,” Smith recalls. “At Coyle, a number of our students come from stressful situations that most Oklahomans probably don’t understand. There’s not a lot of stability in their lives. If you’re dealing with the fundamental needs of food, shelter and safety, how can you possibly concentrate on academics?

“Kids love animals, and teachers use them in some form or fashion in every school system across the U.S., whether it’s a class gerbil or fish tank. Why not get a dog to provide some stress relief?”

Smith says the idea was sparked by Pete’s Pet Posse at Oklahoma State. OSU “First Cowgirl” Ann Hargis initiated the university’s pet therapy program in 2013 to provide training for dogs with the goal of enhancing physical and emotional health on campus.

“If they can do that at a university level, why not the elementary, junior high or high school level?” Smith says.

Smith contacted Kendria Cost, Hargis’ assistant, who referred him to veterinarian John Otto. Otto serves as an adviser to a non-profit foundation (FriendsForFolks.org) that works with inmates at two Oklahoma prisons to train abandoned dogs for pet therapy and service roles.

“Dr. Otto and I talked about preliminary stuff, like how to find a dog and what type to get,” Smith recalls. “He said we needed a dog that’s ‘bomb-proof,’ meaning that if a kid came up and pulled its tail, it would be submissive, take it and wouldn’t snap or bite back.”

Smith started searching at local dog shelters and online. Looking at the picture of that pitiful pooch, Smith thought she might be “the one.” He messaged his friend.

“Still have the dog?”

Smith dropped by his friend’s house around 9:30 the following morning.

“The dog was very friendly. It didn’t take long to determine she had a good personality. Never barked. Not aggressive. All she wanted to do was retrieve any object you would throw. We bonded right there on the spot.

“When we got home, she came over, wagged her tail and wanted to be petted and scratched. She was extremely well mannered. That was more reinforcement for me that it might work out,” Smith says.

A few days later, Smith took newly named “Daisy” to see Dr. Otto at University Animal Hospital in Norman. Otto examined Daisy, weighed her and checked for a microchip. He found no identification on her and estimated that she was about 2 or 3 years old.

“We were trying to find a sweet dog, one that would be good with children, and she fit the bill,” Otto says. “She has that sweet disposition. You want a dog that is unflappable. She’s definitely got those traits where she’s very submissive and non-aggressive.”

Daisy spent four weeks behind bars receiving daily training with an inmate, beginning with the basics: Sit. Stay. Lie down.

As long as you’re making eye contact, she’s going to be your buddy, your friend and your support committee, all rolled into one.

“Sometimes it takes a while to settle the dog down,” Otto explains. “It’s very similar to the inmate. You will often see parallels with the inmate and the animal, especially when they are new to the program. They’ll bond together, form this trust, and then start working through the basic commands. If they want more advanced training, they can go from there.”

“She likely had some previous obedience training, so they were able to teach her very quickly,” he says. “If you hold up your hand and say, ‘High-five,’ she’ll reach up and slap you back, or say, ‘Greet,’ and she’ll offer her paw for a quick handshake.”

“We don’t have enough of these programs,” Otto says. “Programs are where the rehabilitation is, and we need to focus on that. The goal is to get one in every public prison in Oklahoma, because that will serve our state a lot better.

“She has never flinched when it comes to classroom settings or assemblies, on any level whatsoever,” he says. “I was nervous the first time I took her into a kindergarten classroom, because you’ve got all of these little kids that are eye-level with Daisy, and when you bring an animal into the room, they can’t control themselves. She’s in the center of the room with 20 kids around her, all poking and prodding, lifting up her ears, grabbing her tail and shaking it back and forth.”

Pet therapy has produced positive results at Coyle, according to Smith. In one case, a teacher had a difficult time assessing the reading level of a third-grade student. The student was very timid. But, when they took the student to a separate classroom and asked him to read to Daisy, things changed.

“Now that student is to the point where he reads in front of the class,” Smith says. “He’s gained confidence, and we credit it to the icebreaker of reading one-on-one with Daisy.”

“Daisy can go into the office, and the counselor will get down on the floor with the kids and play with the dog. She’ll start with, ‘Tell me about your day, how are things going?’ and the kids are relaxed and open up.”

“We’ve used her in pre-testing and post-testing situations to get the nerves out when we take state-mandated tests, end-of-instruction exams or even the ACT,” he says. “And when the kids have hit the wall afterward, you bring Daisy in and it kind of pushes the reset button.”

Smith says he has no regrets since responding to that fateful Tweet almost two years ago. The family even celebrates Daisy’s “Gotcha Day” on November 7.

“Daisy doesn’t see gender, race, creed, color or religious background,” he adds. “As long as you’re making eye contact, she’s going to be your buddy, your friend and your support committee, all rolled into one.

“Daisy was such a good fit, right from the get-go. She truly is a dog of destiny.”

Cooperative: Central Rural Electric Cooperative
Category: Oklahoma Stories
Back to all stories
Once a stray, Daisy is now a mainstay at a rural Oklahoma school. Photo by Clay Billman