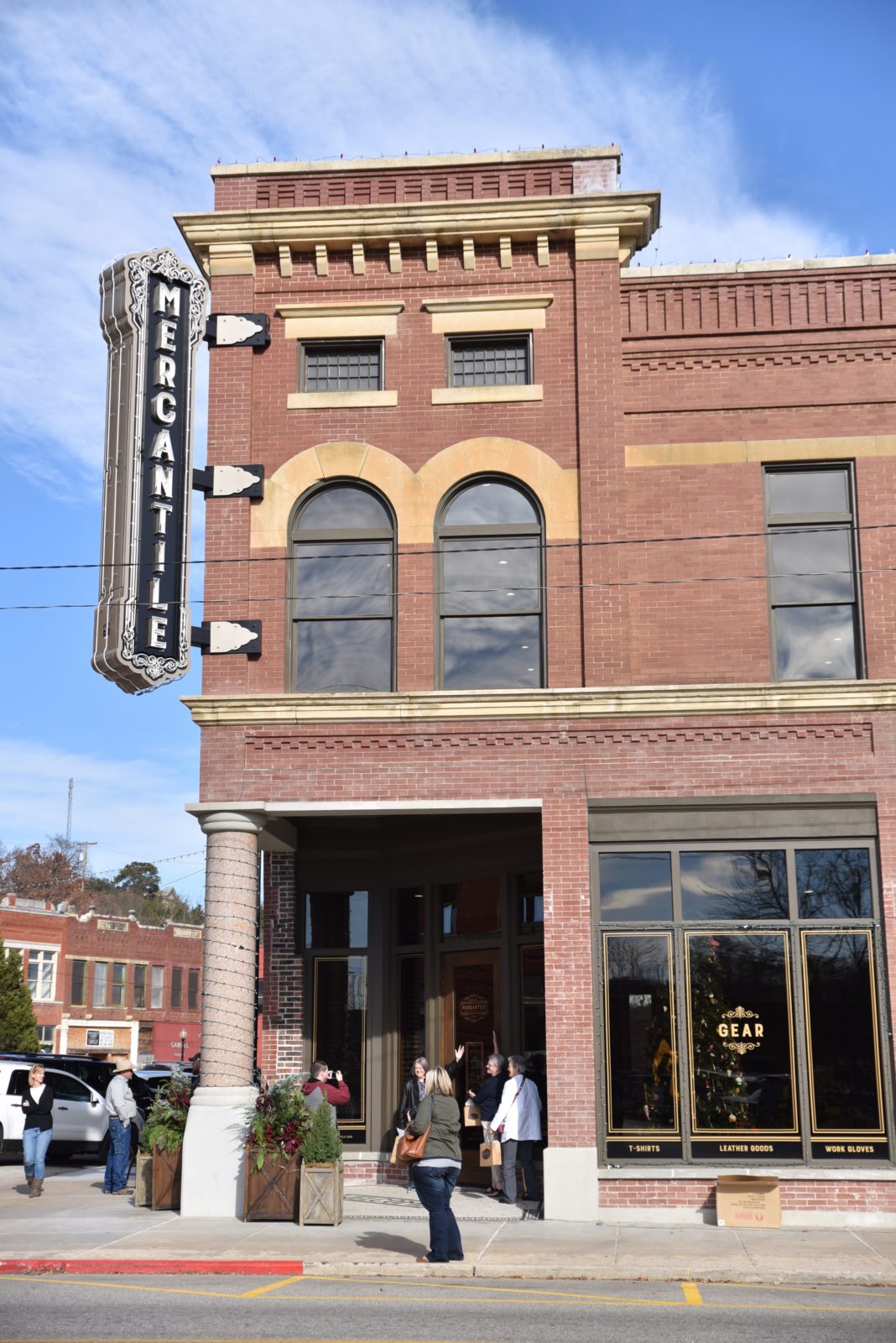 The population of Pawhuska, Okla., more than doubles on a Saturday. The Osage County Seat—with 3,500 inhabitants—attracts 3,000 to 4,000 guests per day to visit the Pioneer Woman Mercantile. In the months since its Oct. 31, 2016 grand opening, fans from all 50 states and abroad have flocked to downtown Pawhuska to eat, shop and perhaps take a selfie with the Pioneer Woman herself, Ree Drummond.

Most Oklahomans are familiar with Drummond, the writer and photographer behind the wildly successful Pioneer Woman blog. She has built a loyal readership sharing “confessions” from the family’s cattle operation west of Pawhuska and her home-cooked recipes with step-by-step photos—all replete with humor. The food-writer, best-selling cookbook author and Food Network personality has been in the public eye for a decade, but never has a vision been so near to heart as the Mercantile.

“She has been intimately involved in every aspect. I’ve never seen her so close to a project,” Mercantile head chef Kurtess Mortensen says.

In 2012, Ree and her husband Ladd Drummond, Indian Electric Cooperative members, purchased an abandoned building in the heart of Pawhuska and began a four-year process of restoring it. Constructed in 1903, the building became home to the Osage Mercantile Company in 1910. During Prohibition, it functioned as speakeasy, evidenced by a collection of old bottles found in the basement. It was even rumored to have been connected to the local hotel by tunnel. In subsequent years, the building housed a variety of businesses. But after decades of dormancy, it was in need of a new beginning.

The Drummonds had the dream to bring the mercantile back to life—with as much authenticity as possible. During the renovation, they refinished the tin ceiling tiles, had a craftsman restore most of the building’s original windows and kept the hardwood floors whenever possible.

Originally, they had planned to reestablish a General Store shopping experience. However, as time passed, their vision for the Mercantile expanded.

“We can’t do a store without food. And we can’t do a deli without a bakery,” the Drummonds decided.

“Ree thinks so much about food. She’s genuinely obsessed with it.” Mortensen says. “I get random texts from her with new ideas, which is great because I think about food 80 percent of the time.”

Fan-favorites like the Marlboro Man sandwich, originally made with cube steak, sautéed onions and seasonings, have been re-imagined. Now more indulgent, the sandwich is made with USDA-choice ribeye and served with a plate of crisp, homemade chips. In addition, a grab-and-go line allows those who might not have the time for a sit-down meal to pick up a salad or fresh-made sandwich.

The Mercantile’s coffee bar is situated under a green National Biscuit Co. (Nabisco) mural they uncovered during the renovation and preserved. They offer three Pioneer Woman coffee blends, all sourced by Tulsa’s Topeca Coffee through a family farm in El Salvador. Two signature drinks have become best sellers at the Mercantile. The Spicy Cowgirl is a cold brew with mocha and milk, topped with a drizzle of heavy cream, vanilla and a pinch of Mexican chili powder. The Cowboy Coffee is a dark roast with steamed milk and sarsaparilla, topped with espresso and smoked sea salt.

A General Store makes up the other half of the main floor. Each item available for purchase was hand picked by Ree Drummond to give guests a genuine experience of how shopping would have been in years past. The fun, colorful collection includes housewares, kitchen items, fabric, rustic home decor, books, Drummond’s own line of jeans, jewelry and more.

While downstairs is fast-paced, the second story of the Mercantile has a more relaxed feel. A full commercial bakery, the dream of Ladd Drummond, features baked goods made from scratch daily—everything from pastries, muffins and scones to pies, brownies and cookies. Comfortable seating and scenic views of downtown Pawhuska make the upper level a great place to take a break. An old-time candy bar of apothecary jars filled with colorful taffy, jellybeans and rock candy is a sweet way to conclude a Mercantile visit.

In addition to being an enjoyable destination, the Mercantile has brought new life to a rural Oklahoma town that experienced its boom in the 1920s. Joni Nash, executive director of the Pawhuska Chamber of Commerce, says as many as 14,000 to 16,000 guests visit town on a holiday weekend.

“The dynamics of the community have changed. If you walked into a restaurant on October 30, you knew everyone there,” Nash says. “But when the Mercantile opened, it transformed the town overnight. Now when you walk into a restaurant, you don’t know anyone.”

However, citizens have welcomed this renewal. The Mercantile has provided more than 190 new jobs to the local economy. And the Osage County business has been good to their employees, paying them median wages for Tulsa County.

According to Nash, other Pawhuska merchants have put the shine on their own businesses and additional renovation projects are taking place downtown.

One local businessman who is enthusiastic about the progress is Bruce Carter. He is a silversmith and the owner of Tallgrass Art Gallery, which features Western, Wildlife and Native American Art and Crafts by more than 40 Oklahoma artists.

Carter says the Mercantile has provided Pawhuska with an opportunity that doesn’t come every day.

“Ree has been amazing. She hasn’t made it all about herself. She has been supportive of the entire town,” he says. “It’s a springboard to get us where we need to be as a rural community.”

When it comes to the lines, he says it’s well worth the wait to visit the Mercantile (though he likes to stop in early for a cinnamon roll). The employees are well trained and the food is top-notch. He adds that members of the Drummond family are frequently found walking in the lines, making conversation with their guests.

“They’re part of this community,” he concludes.

Whether you’re planning a family getaway or a girls’ weekend, there’s lots to do in Osage County.

According to Pawhuska Chamber of Commerce Executive Director Joni Nash, there is steady traffic at the Mercantile Monday through Wednesday. Thursday through Saturday draw bigger crowds to town, especially when the weather is pleasant and during holiday weekends.

“There are some very unique and quaint places to stay that are very well done,” Nash says. “As far as planning an overnight visit, we love to help.”

For more information on Pawhuska, call the Chamber of Commerce at 918-287-1208 or check the list of accommodations on their website: www.pawhuskachamber.com.