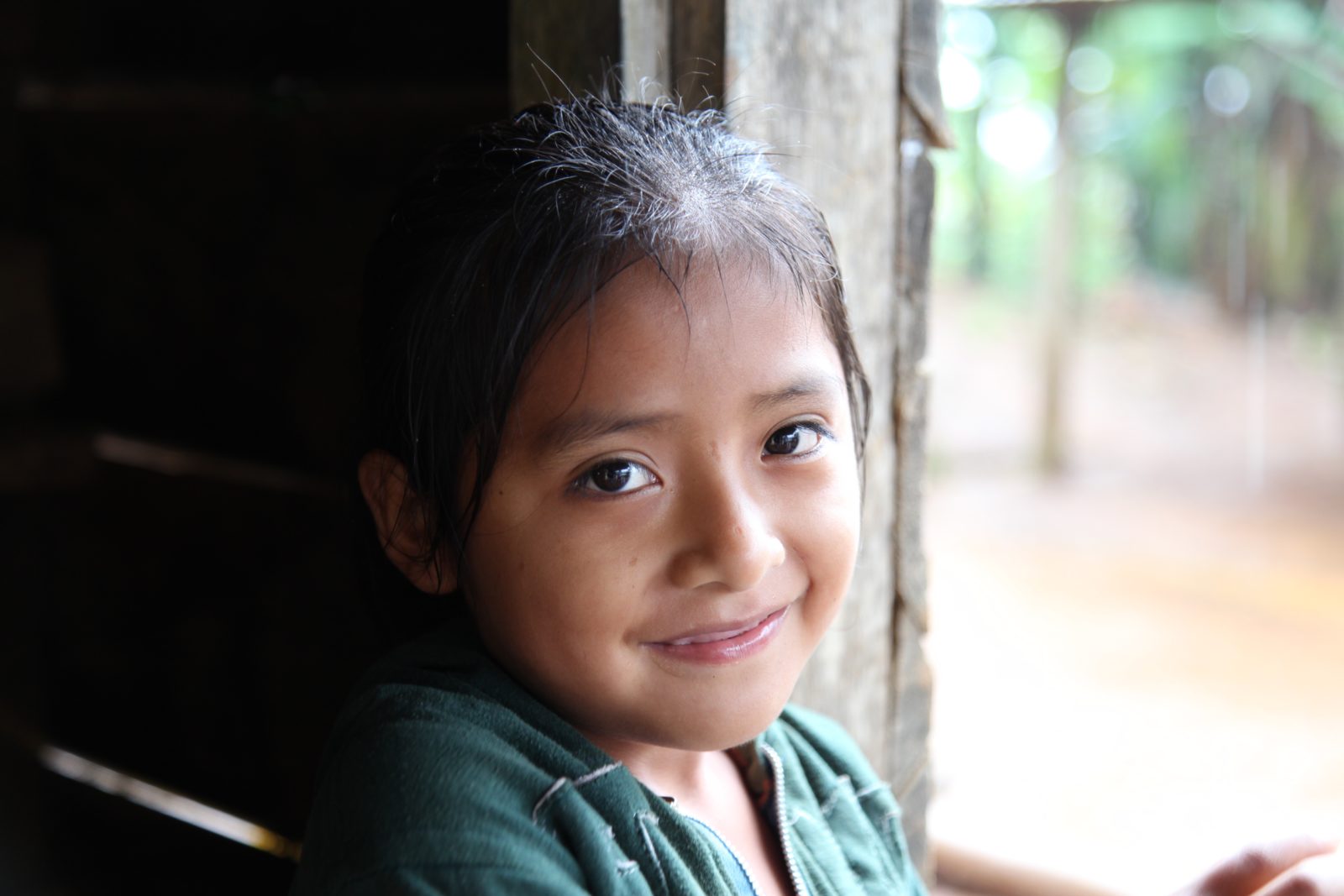 it’s a rainy and gloomy morning. Dirt roads in the village of Chiis are wet, muddy and slippery. The ground is soaked with constant rainfall; abundant vegetation is lush and dense. Villagers walk—some run—to a community center building. Elders, men, women, and children are headed in the same direction: to enter the white, concrete structure where the community typically gathers. As dreary as it is outside, it’s a whole different picture inside this gathering point. The building is filled with music, laughter and warm hugs. Fireworks can be heard in the background.

The tall men in green shirts are volunteer linemen, electricians and engineers from several of Oklahoma’s electric cooperatives. They are surrounded by children. In the midst of hugs, tears begin to flow. At this moment, both co-op volunteers and children realize these are the last few minutes of their three-week journey together. The volunteers came to Chiis, Guatemala, to bring lights to a village that had never had electric power. This morning, the lights have been turned on in 65 homes. From this day forward, residents of Chiis will enjoy the benefits of electricity. What the co-op volunteers did not expect, however, was the strong bond they would form with the children. As they hug the little ones goodbye, it becomes impossible to hold back tears. Today, they leave the gift of electricity behind, but they carry in their hearts the gift of friendship for a lifetime.

Through a partnership with NRECA International, the philanthropic arm of the National Rural Electric Cooperative Association, Oklahoma’s electric cooperatives sent 13 volunteers to electrify a poverty-stricken village in northwestern Guatemala. The village of Chiis is located in the state (department) of Alta Verapaz on top of a mountain. At an altitude of 2,700 feet, Chiis is a small community that relies mostly on coffee, spices and corn for self-consumption. Most villagers speak a Mayan-based dialect, Kekchi. Oklahoma’s electric cooperative volunteers built 3 miles of power lines. They lines will be maintained by a small utility company called ADECORK (Associacion Para Desarollo Communitario Rax Kiche). Translation: Association for Community Development Rax Kiche. ADECORK will carry the responsibility of generation, transmission and distribution of electric power to Chiis. The utility operates a small hydroelectric plant with a capacity of 75 kilowatts (kW). The project, funded by the Electric Cooperatives of Oklahoma and partnering organizations, takes co-ops back to their roots of rural electrification.

“It has not been that many years since pioneers electrified rural America in the 1930s and 1940s. It is important that we keep this memory alive,” Chris Meyers, general manager of the Oklahoma Association of Electric Cooperatives (OAEC), said. “We are uniquely situated to help with this type of giving. It’s crucial that we share the many blessings we have by providing this vital service to those who would not otherwise have it.”

Jimmy Taylor, Northfork Electric Cooperative board president and OAEC International Committee chairman, expressed to Chiis residents during a lighting ceremony that the future of the children in the village would be impacted by their access to electricity.

“This is a great day for the adults in the village, but an even greater day for the children here today and the ones who will be born in the next five to 10 years,” Taylor said. “I understand this because that child was me 64 years ago. Electricity came to my parents’ ranch two years before I was born, and it changed my future.”

Leading the Energy Trails team was Damon Lester with Indian Electric Cooperative based in Cleveland, Oklahoma. Lester shared that the team experienced various challenges while completing the project. In a span of 3 miles of line, the volunteers strung wire on more than 50 poles, installed 49 anchors, hung transformers and wired 65 homes to receive first-time electricity. According to Lester, some of the challenges were difficult terrain that required physical endurance from the linemen as well as good communication skills as the volunteers had to spread out throughout the service area to accomplish the work.

“We had a few hand-held radios, but they would stop working over short distances. We had huge obstacles to get from one place to the other in a timely manner since many areas were not drivable,” Lester said. “It took a lot of trust in each other.”

The team of volunteers were empowered by help from local villagers, especially young men. At first, Lester said the villagers were curious observers. After a couple of days, they began to help by pulling off wire, dragging heavy tool bags and doing whatever was needed. One older man gave up half of his house to serve as a warehouse for the team’s tools and supplies. Not only the adults assisted; the children in the village were loyal helpers and even better friends.

“Every morning when we showed up, the village came alive. The kids would run to the trucks with excitement and would call us by name,” Lester said. “The more I felt their excitement, the more pressure I felt to ensure we succeeded. It became more real. It was a great sense of responsibility for me and the guys.”

The 13 volunteers who served on the project had not worked side-by-side before; still, they developed a brotherhood during the experience and formed lifelong friendships.

“It requires a submissive, yet driven attitude to do what it takes for a successful and safe job. Everyone who was on this team was here for the right reasons,” Lester said. “Linemen are typically more reserved, but a trip like this is the perfect environment to let your guard down. We work from the heart, not from ego. Everything we do is selfless.”

In linemen circles, working in the aftermath of a major storm to restore outages causes stronger bonds among crew members. International projects like this bring about a similar experience.

“Sometimes a good storm can bring greater morale when everyone lets go of their personal agendas,” Lester said.

The experience was unique for Lester who had to step aside from the day-to-day job functions to serve as an overseer. HIs responsibility was to empower team members to do the job while he looked ahead to the next steps to ensure completion of the project.

“It was hard for me to not jump in to everything and be a physically moving part of the machine that made the wheels turn,” Lester said. “I was struggling, but the team was very supportive. To still be able to be a productive member of team by stepping aside and letting others do what they do best was a lesson for me.”

Let There Be Light

On October 25, the lights came on in the village of Chiis for the first time. The volunteers met at the village’s community center building for a celebration. It was a joyful occasion. The families in the village prepared a meal for the team. For the linemen, it was a bittersweet moment. They felt fulfilled by having the job done, but their hearts were heavy as they said goodbye to dear friends.

“It was a huge relief on Inauguration Day to know we completed the project, and there was a lot of anxiety for all the goodbyes,” Lester said. “Overall, we had a tremendous feeling of satisfaction that every family had power.”

The happiness of the people of Chiis, even though they live in extreme poverty, made a lasting impression on the team and on the Inauguration Trip delegates who traveled to witness the turning on of the lights.

Colin Whitley, CEO of Canadian Valley Electric Cooperative based in Seminole, Oklahoma, was part of the Inauguration Trip team and felt humbled by observing the people of Chiis.

“This trip made me think of all the advantages we have at home and the things we take for granted, like electricity,” Whitley said. “I was impressed by how happy the people can be living with the little they have; it makes me think that sometimes we are missing out on something at home.”

During the Inauguration ceremony, Lester concluded the festivities with these words: “It’s been a true gift to be able to come here and provide a gift to this community. The experiences we have had we will cherish forever; we will always remember the community of Chiis and the people and children who stole our hearts.”

10 REASONS TO GIVE THE GIFT OF LIGHT:

1.  By giving, you’re helping decrease the number of 1.2 billion people around the world who live without access to electricity.

2.  The Energy Trails movement strengthens the mission of electric cooperatives, which is: neighbors helping neighbors, at home and abroad.

3.  When you give to the Energy Trails Foundation, you are helping establish goodwill among nations.

4.  By helping developing nations gain access to electricity, we are helping local economies to thrive and grow, ultimately strengthening the global economy.

5.  By supporting the Foundation, you’re enabling local co-op linemen to have the opportunity of a lifetime by bringing first-time electricity to communities in need; these volunteer linemen will come back changed and with a powerful, new perspective in life.

6.  The international involvement can be used as a recruiting tool for co-ops to secure new linemen who are driven and talented.

7.  The Energy Trails Foundation gives the entire co-op family (employees and member-owners) the opportunity to help developing countries who would not otherwise get the help they need.

8.  By joining forces to bring electricity where there is none, we keep the cooperative spirit of rural electrification alive.

9.  Giving to the Energy Trails Foundation means you’re giving a gift that will not go away. It will empower generations to come.

10.  Your gift is a tax-deductible contribution! The Oklahoma Energy Trails Foundation is a 501(c)3 not-for-profit.