Skip to content
Home // Stories // Commentary // Fitness for all! 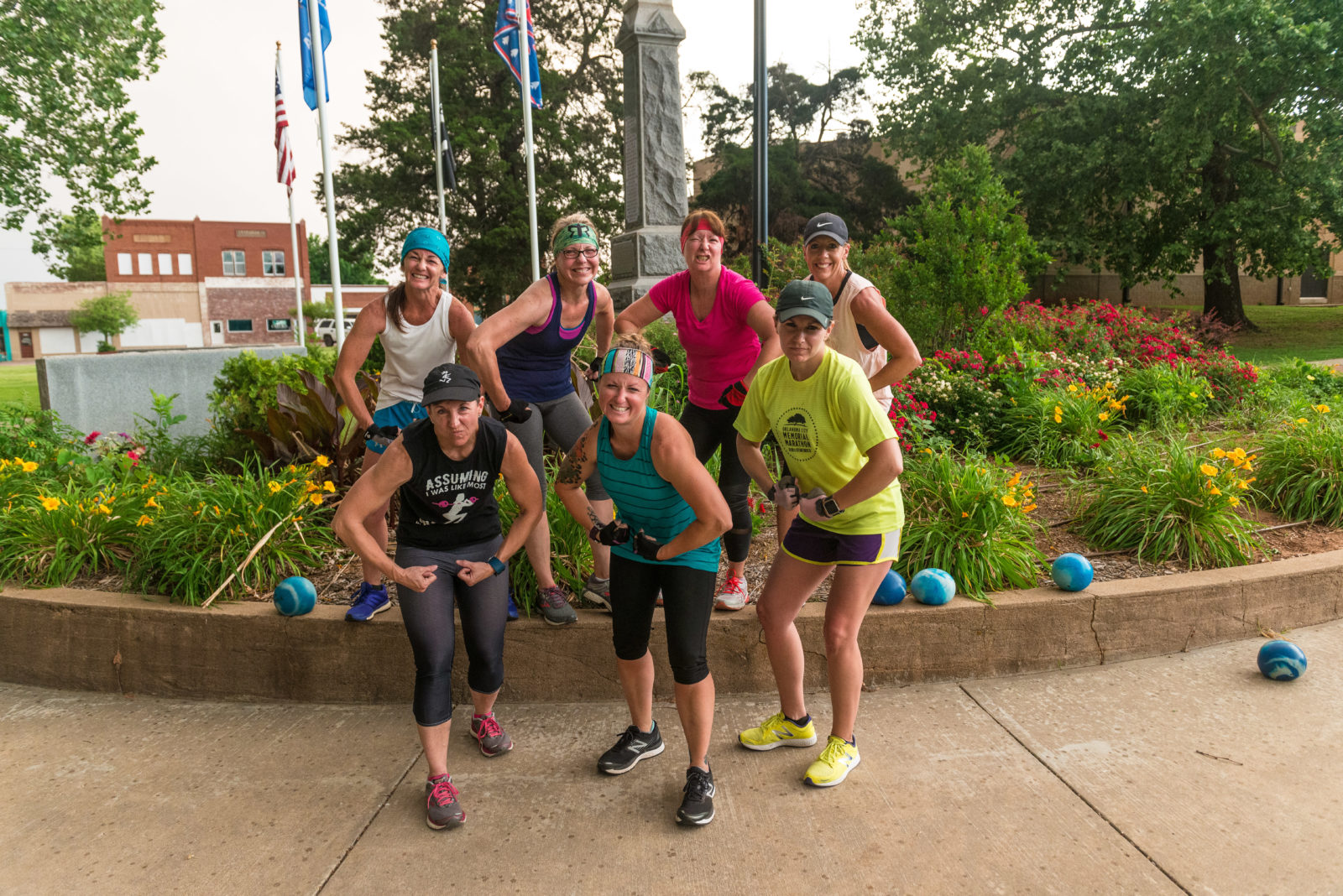 No matter your age or where you live, it’s always a good time to get healthy

If Oklahomans are searching for a little inspiration this summer to boost their fitness level or develop a healthier lifestyle, look no   further than the empowering individuals in the next few                   paragraphs. Each transformation is a measure of the dedication, patience and balance they devoted toward making a change for the better. Although all of them will freely admit their fitness journey is far from over, together they’ve shed hundreds of pounds while gaining a new perspective on life.

JAMES PRATT “I’M JUST HAPPY TO NOT BE DEAD.

The runner’s high is a real feeling that captivated Pratt, an Edmond-based photographer and journalist, as he completed the Oklahoma City Memorial Marathon in April. He ran the required 26.2 miles and then some while detouring into the crowd with high fives and waves. After grazing death during a second heart attack in 2017, the race was a celebration of his amazing progress.

“I had an absolutely fantastic time,” he said. “The marathon was such a blast, which I did not expect, and that motivates me even more.”

When Pratt was diagnosed with diabetes in 2016, he realized he should change his eating and exercise habits. However, it wasn’t until he received a warning from his cardiologist a year later that he began to make drastic changes.

“He laid the law down and said, ‘You are a very sick person and you’re not going to live much longer,’” Pratt said. “That’s when I got really serious about everything.”

Since then, Pratt has dropped 50 pounds by cycling, swimming or running daily while cleaning up his diet with eggs, lean protein, vegetables and fruit. His medications, for conditions such as high blood pressure, have either been eliminated or reduced. His alarm goes off every day at 5 a.m. to ride his bike to the local gym.

The renewed energy he’s found in an active lifestyle fuels his day as he meets with clients, helps his wife, Kay, with her real estate business and enjoys hobbies such as leather work, film photography, reading and playing the guitar.

“I feel awesome,” he said. “I sleep at night, and my wife says I don’t snore anymore. I’ve changed my wardrobe twice for smaller clothes—I didn’t realize I was that overweight.”

With support from his wife and daughter who often accompany him on runs, Pratt has a new lease on life. Each day presents an opportunity to explore the healthy balance between exercise and food while mixing up workouts to avoid boredom.

“It’s one day at a time, one step at a time,” he said. “You don’t do it all in one day. It takes a long time with consistency.”

AMY DOWNS “FIND YOUR TRIBE AND NEVER GIVE UP.”

Downs’ incredible story can be traced back to the hours she lay trapped under rubble following the bombing of Oklahoma City’s Alfred P. Murrah Federal Building in April 1995. At the time, she was a credit card loan officer for Allegiance Credit Union (previously Federal Employees Credit Union) inside the Murrah building, and those critical moments presented an opportunity to examine her life and evaluate what was important. Fast forward to 2009 when Downs, a resident of Yukon, made a new year’s resolution to join a local gym and improve her health. Facing her fears was the first step to building self-confidence.

“I would’ve done anything to avoid seeing myself in the mirror years ago, but now I look in the mirror to check my form as I lift weights,” Downs said.

From cycling and running to swimming and weight lifting, trainers and friends have mentored Downs with encouragement to reach her fitness goals.

“I’ve had amazing people help me adjust to all of these sports and welcome me even though I don’t look like a typical athlete,” Downs said.

One of her biggest achievements to date has been completion of a full Ironman event in 2017.

“To see the ability of your body when you consistently train and accomplish something—it’s so powerful. It’s almost symbolic of your entire life and what you’re doing,” she said.

Early in 2018, Downs was named president and CEO of Allegiance Credit Union, a leadership role that demands more of her time than before, but she still makes exercise a priority—even if it means getting up at 4:45 a.m. for a workout. This year, she has competed in a half Ironman and cycled across the state of Oklahoma with her husband in an annual ride sponsored by Oklahoma Freewheel. She said the key to her weight loss and lifestyle change has been finding other people with the same goals who can bring accountability to the entire group.

“I still get frustrated with the scale, and I still have issues with nutrition,” she said. “It’s a battle I will have for the rest of my life, but I’m not giving up.”

JOSUE ARAUJO “Find Something That Works For You”

Araujo has struggled with his weight much of his life, bouncing from one diet to the next with little success. A pastor and family man living in Bixby, he found motivation to begin the first phase of his 130-pound weight loss when he and his wife learned they were expecting their first child.

“I wanted to be a dad who was active and enjoyed playing with my child,” he said. “I wanted to be able to keep up, so my knees wouldn’t hurt and I wasn’t short of breath.”

Initially, Araujo lost around 50 pounds but later gained some of it back. After the birth of their second child, getting fit and healthy became a family effort. Together, the four of them began visiting their local gym where Araujo attends group fitness classes or jumps on a bike at least four times a week.

“My advice is don’t make working out a prison,” he said. “In groups, you have accountability because you see the same people every time you go. You don’t have to do it alone.”

Finding friends to keep consistent while eating smart a majority of the time has been life-changing for Araujo who said losing the weight has granted him a new sense of freedom. Also, as a pastor, his daily fitness routine has served as an effective stress reliever.

“It brings a lot of mental balance to a very busy schedule,” he said.

“It’s best to plan ahead,” he said. “If you know you are going to have treats at a party or special event, be wise about your meals for the rest of the week.”

For those wanting to clean up their diet and add an exercise regiment, Araujo advised keeping an open mind to learn in time what works best.

“You can exercise two hours a day, but if you don’t eat well you will never be healthy,” he said.

In the pre-dawn hours of a sultry morning in May, Indian Electric Cooperative member Ellis begins setting out tires and medicine balls for her boot camp class in downtown Pawnee. By 5:30 a.m., a group of locals are warming up for an hour’s worth of running, body weight moves, high intensity interval training and other exercises. A wife, mother, grandmother and tag agent at Pawnee Tag Agency, Ellis believes in the benefits of a healthy lifestyle. She is an instructor and experienced marathon runner who enjoys coaching people of all fitness levels.

“I’m really passionate about it,” she said. “Seeing their dedication to show up this early in the morning is awesome.”

Depending on the day, her workouts might include the local high school football field, Pawnee’s courthouse lawn or even a bank parking lot. In the past, she and a group of girlfriends met a few mornings each week on a country road near her home in Maramec to log a few miles in what became known as the Maramec Running Club. Contrary to what some might think, Ellis said being fit doesn’t have to involve an expensive gym membership with all of the latest equipment.

As for food, Ellis believes in moderation. Common sense decisions such as eliminating pop and sugary energy drinks while also avoiding foods heavy in refined sugars will clean up a diet. She encourages local clients and organizations that contact her for coaching to “just move” in an effort to establish healthy habits and an active lifestyle.

“If you’re moving for one hour or 30 minutes or 15 minutes, that’s more than you did the day before,” she said. “That’s success.”

Top 5 Tips for Getting Healthy