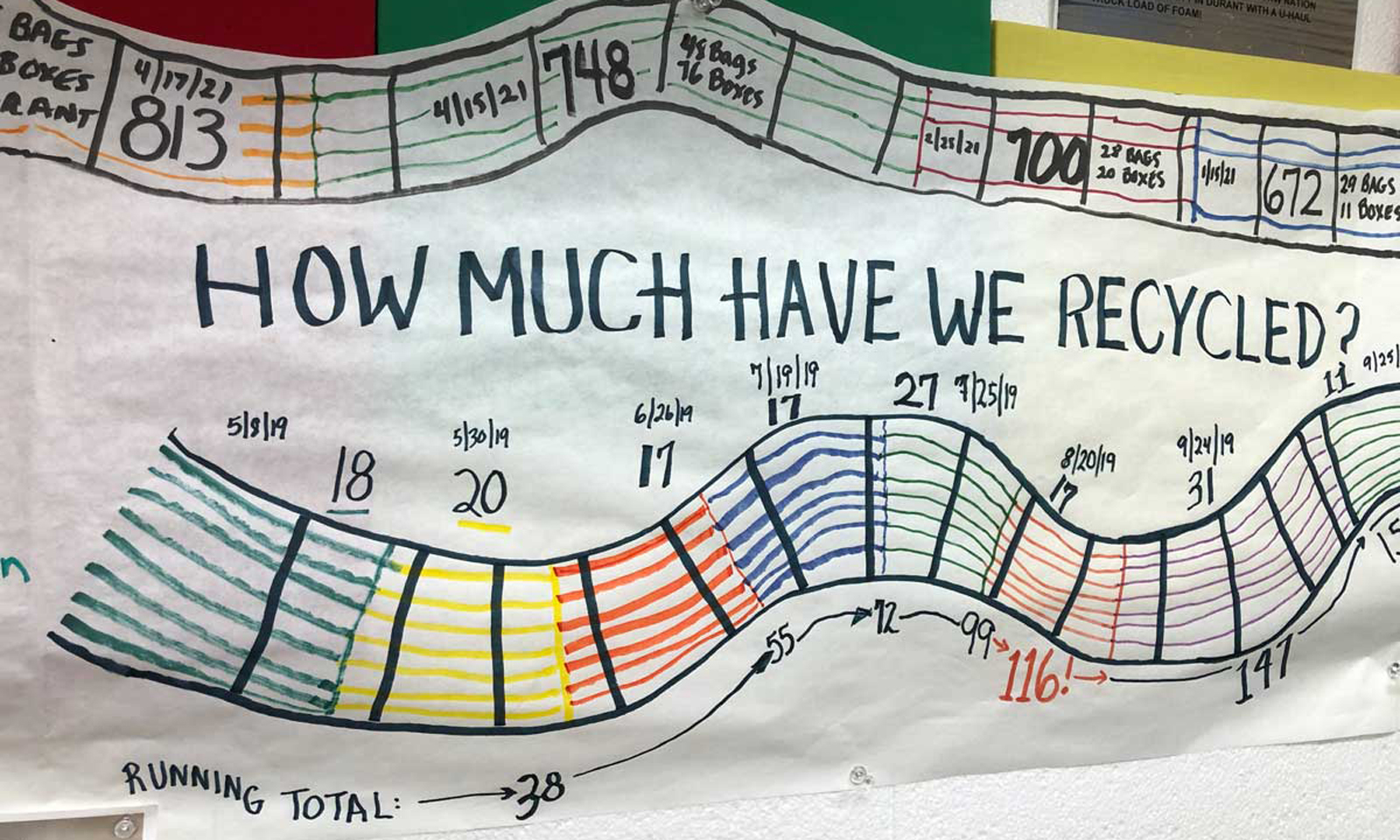 A community comes together to increase recycling efforts

On a warm evening last fall, a large group of people gathered on the back lawn of the University Lutheran Church and Student Center (ULCSC) in Norman, Oklahoma, to bless a machine.

The atmosphere was one of celebration and satisfaction at a significant goal achieved: the 1,000th 33-gallon bag of polystyrene foam had been collected in a new recycling program. The machine in question was on the trailer: a polystyrene densifier. The densifier suppresses the air content of the polystyrene and melts the plastic into a long, thick rope that can then be cut into four-foot logs, taking up much less storage space and reducing other costs as well, such as gasoline and volunteer time.

What is polystyrene foam? It’s what many egg cartons, to-go cups, clamshell containers, meat trays, coolers and packaging material are made from. It’s 5% plastic and 95% air, making it lightweight but also bulky. Most people call it by the trademarked name “Styrofoam,”™ but that’s a common error; the Dow Chemical Company trademarked that name for its foam products.

The polystyrene foam most of us are familiar with is recyclable, marked with the number six within the chasing arrows symbol. Many cities do not have the facilities to recycle polystyrene foam, so most polystyrene foam ends up occupying valuable space in landfills, where it will stay for 500 years before it begins to break down. The foam contains chemicals such as benzene and ethylene that are known carcinogens, and these substances leach into the soil and groundwater, or into the air when the polystyrene is heated, impacting both human and animal health.

ULCSC parishioner Cathy Bowden was part of a “Green Team” that formed in January 2016 to begin an intentional recycling effort and to influence their community to take a larger role in the environmental stewardship of the Earth. A room for foam collection was set aside within the University Lutheran Church building and dubbed the “Styro-Station.” The room is full of mountains of polystyrene foam in large plastic bags that fill huge cardboard bins lined up against the walls and covering the carpeted floor. In May 2019, Cathy, her husband, Doug, and other volunteers used a U-Haul truck to transport the first load of 18 bags to the DART Container Corporation in Ada, the closest foam recycler in the state.

The Bowdens and their fellow volunteers from the “Churches Caring for Creation,” a coalition of 14 area churches, continued to drive loads of foam to Ada throughout the pandemic, switching to Durant when the Ada plant temporarily shut down. More outreach efforts followed; chicken farmers became “poultry partners,” re-using egg cartons by the tens of thousands. One farmer estimates that this saves him $1,400 per year. The University of Oklahoma’s (OU) biomedical research lab began to bring their used foam coolers. Concerned OU students joined in, starting the Styro-Home Club, placing recycling “Home for Foam” boxes and campaigning for a “foam-free” campus.

In May 2021, Cathy Bowden applied for a grant from the national Foam Recycling Coalition. The $23,000 grant, awarded a month later, paid for the densifier and the trailer it’s mounted on. In addition to densifying in the church parking lot every eight to 10 days, they have also partnered with the Pioneer Library System to host foam collection events in seven library parking lots. The volunteers embarked on this new effort in January 2022, going to meet the public and densifying the foam on the spot, and they have had 19 collection events in total.

On a windy day in late October, volunteer Brad Hawkins was helping at a collection event in the Norman Public Library Central location. In between chasing down bags of foam flying across the parking lot, the team was well into their working rhythm: two people carried the foam to the trailer and broke it down, two people removed any stickers and paper and fed it into the densifier’s hopper and Brad and Doug kept an eye on the machine’s RPM and temperature, occasionally pausing to cut a log as it emerged.

“It’s not the easiest machine to maintain,” Hawkins says. “Occasionally a pin will break if the load gets too heavy, and you have to replace it.”

Four thousand pounds of these logs — dubbed “ingots”— are now stored on pallets in a Norman warehouse. The logs are considered a commodity with a market price that changes hourly, ranging from 6 cents to 20 cents per pound.

“No one’s going to get rich off of this,” Bowden says with a laugh. All proceeds from the sale of the densified foam are plowed back into maintaining the densifier. Cathy was recently invited to join the Oklahoma Recycling Association, where she is making contacts to find buyers for the densified foam.

The group has worked closely with the City of Norman’s environmental and sustainability manager, and the city will soon add signs to its recycling stations informing residents that they can drop off packaging foam at ULCSC. Efforts are also underway to appeal to commercial businesses and manufacturers to find alternatives to polystyrene foam in favor of paper-based, cornstarch or other biodegradable choices.

Back at ULCSC, Cathy Bowden turned on the light in the Styro-Station and beamed. This former science teacher, who celebrated Earth Day before it was a national holiday, is not done yet. Crayon and marker recycling is on the agenda, and pill bottles are now also being reused for the medical care of indigent patients in Slaughterville, where medication had previously been dispensed in ziplocked plastic bags. Many challenges lie ahead, not least the possibility of making TikTok videos to publicize the recycling effort. Time for the next generation to take that up.