The Latin phrase, “ad astra per aspera,” translates to mean, “to the stars through difficulties.”  This could be the motto of Bill and Shonna Richardson, Central Rural Electric Cooperative members. Throughout more than 40 years of marriage, there have been bumps and detours in their road to farming, but their roots go deep into Oklahoma soil and their love of the land has been constant.

In February 2022, the couple’s Persimmon Hill Bakery opened on Stillwater’s Main Street. It’s a magnet for foodies, gaining a well-deserved reputation for excellence. However, their success story wasn’t written overnight. Here they share their journey to making their unique farm-to-bakery dream a reality.

Agriculture is a multi-generational theme in both families. Shonna Lynch grew up on an acreage near Edmond. Her dad was a florist, and her mom managed the greenhouses, selling wholesale flowers to different flower shops around the state.

Bill Richardson grew up on a farm near Perry. They grew five different varieties of Bermuda grass and had a business digging and planting Bermuda sprigs. In addition, they farmed 650 acres of hard red winter wheat and raised cattle.

When he was 17, Bill bought a place across the road from his family farm—10 acres, a house, which was built shortly after the Land Run of 1893, and outbuildings. Three years later Bill and Shonna Richardson married. Three of their four children were born on that farm.

No one could imagine the combination of difficulties the ‘80s would bring—the collapse of Penn Square Bank and the oil bust, drought, decreasing cattle and grain prices and rising interest rates. Between 1982 and 1986, farmers were losing their farms. These factors spelled disaster for the Richardsons, too. By 1987, Bill’s dad had to sell all but 30 acres and his house—losing all his equipment—and Shonna and Bill had to sell their house and property.

Of that sad time, Bill says, “It was the hardest thing to watch all that we had acquired be sold and gone, in a matter of minutes, what we—my mom and dad, Shonna and I, and our brothers and wives—had put together over many years.”

Bill and Shonna moved into a small rental house in Perry.

“We got an education on a farm north of Perry, Oklahoma, and we went to Oklahoma State University (OSU) and formalized that education,” Bill says.

Shonna went to work at Perry Memorial Hospital where she took all the extra hours she could get while her husband pursued a degree in education. Bill got his degree in 1992 and became a teacher and cross-country coach at Perry High School.

Next, it was Shonna’s turn to get a degree at OSU in computer science. During her last year, their fourth child was born.

On the Road Again

Now they were both through college and in 1997, Bill left teaching and he and Shonna went to work for an agricultural software company. In 1998, the family moved from Perry to Stillwater and in 2001 they bought 80 acres outside of town, a pasture full of brambles, goathead and thistles.

At first, they ran cattle on the property. They also had a garden, which produced enough vegetables for their own use with excess to sell at the farmer’s market.

Shonna, who had learned to bake from her mother and participating in 4-H activities, also occasionally sold loaves of bread or pies at the market. Her baked goods proved so popular that a friend offered her use of a commercial kitchen. In 2004, Bill and Shonna built their own kitchen at the farm.

Being on a farm allowed their youngest child, Abby, to become involved in FFA activities. She had her own horse and convinced her parents to board a couple of other horses.

She had also seen articles about horse rescues. Not far from the farm was an operation which purchased old or unwanted horses and shipped them to Mexico for slaughter. Individuals could buy a horse to save it, but were expected to take immediate possession of the animal. The Richardson farm became a halfway home for these horses while the new owners made accommodations for their purchases. At its peak, Red Dirt Horse Haven had over 100 horses on the property.

Bill continued to work for the software company during the day, helping with the horses after work. In keeping the pens clean, he had plenty of material that he turned into compost.

By 2008, the family got out of the cattle and horse rescue business. Meanwhile, Shonna had become deeply involved in beekeeping. Bill planted acres of clover, hairy vetch and plants that provided food for the bees. By 2015, Shonna had 120 hives.

The two never stopped learning and were not afraid to try different ventures.

“As long as you’re willing to put the work in, you’re never too old to change, says Shonna. Don’t let life limit you; try something new.”

As the years passed, Bill’s hard work on his land was paying off. Thanks to the compost, the soil was rich and fertile. He added ponds to the property and the couple planted a variety of trees and bushes—persimmon, redbud, sumac, wild lilac—to attract pollinators. Two acres sowed with wildflower seeds provided another source of food for the insects and income for the family. Wildflower events allowed visitors to pick bouquets and take pictures in the colorful fields.

In the spring of 2019, Bill and Shonna put in an orchard with peach, pear, apple and cherry trees. They added both native and non-native plums, blueberries, blackberries, gooseberries and grapes.

Shonna, meanwhile, had expanded her baking business, studying chefs and trying new recipes. She added French macarons (not to be confused with macaroons), croissants and pain au chocolate. Still selling through farmer’s markets, the family added a small retail shop at the farm.

In 2021, Bill left his job to work full time on the farm and help Shonna with her burgeoning business. They began looking for a space for a shop in Stillwater. In early 2022, Persimmon Hill Bakery opened on Stillwater’s Main Street.

“We do everything from scratch, everything fresh, and no added preservatives. We also do everything seasonally,” Shonna says. “When the good tomatoes come in, we do tomato pie—a savory pie consisting of a pie crust with caramelized onions on the bottom, chopped tomatoes, cheddar and mozzarella cheese, basil, salt, pepper, plus a secret ingredient and sliced tomatoes on top—kind of a meatless lasagna.”

Besides baked goods, there are homemade jams and jellies, including corn cob jelly. The couple and their team of eight can create more than 150 products in all. Some of their items will be available in a concession at OSU football games this fall. Business is so good that the bakery has almost outgrown its current location.

Persimmon Hill Farm is not the farm the Richardsons envisioned in 1980. They grow a lot of their own products and support other farmers by buying other items almost exclusively from Made in Oklahoma members.

When they lost their first farm in 1987, Shonna told Bill, “We may have to let it go to get it back one day.” Today she adds, “Here we are.”

Not in the Stillwater area? Visit their website to place an order and have baked goods shipped to you! 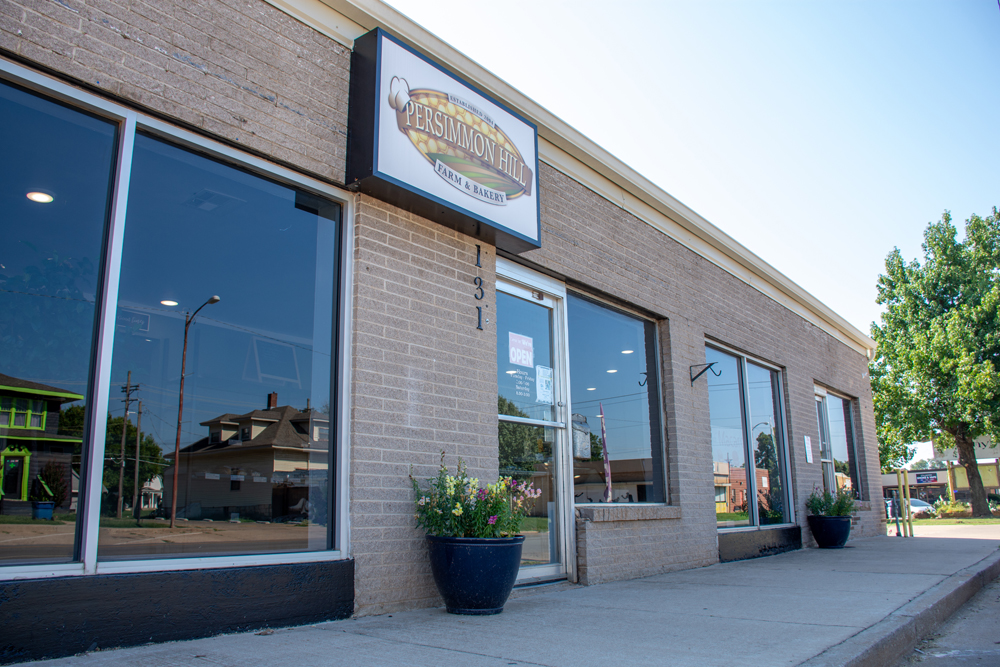 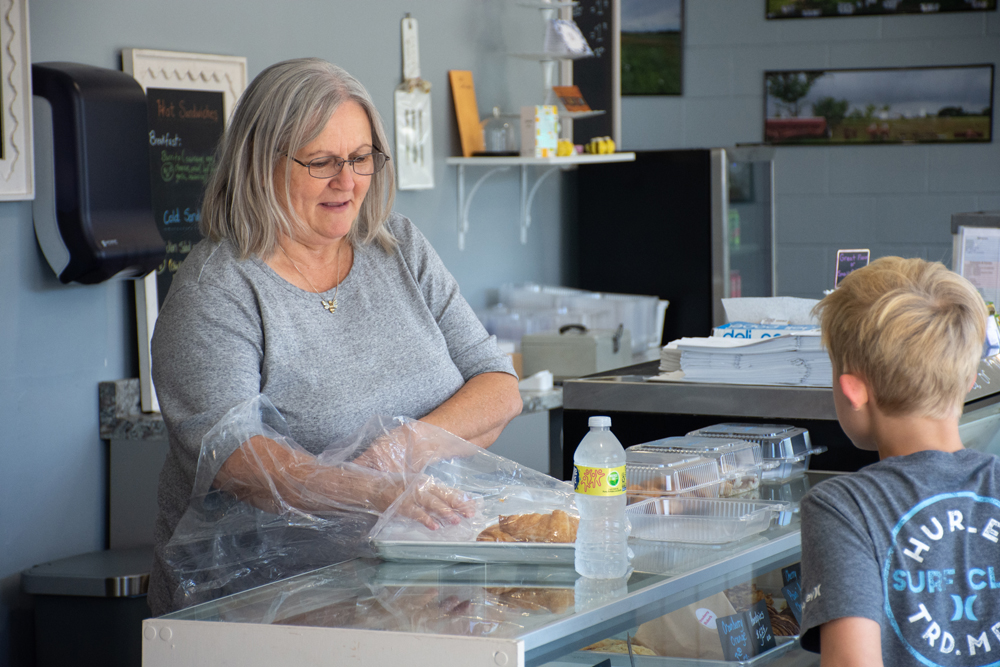 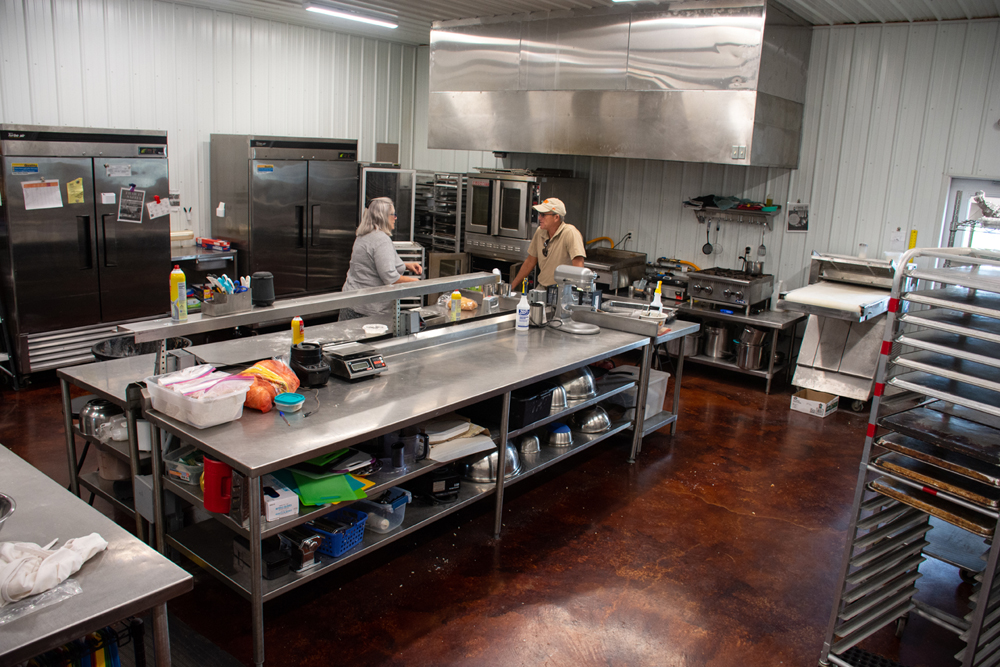 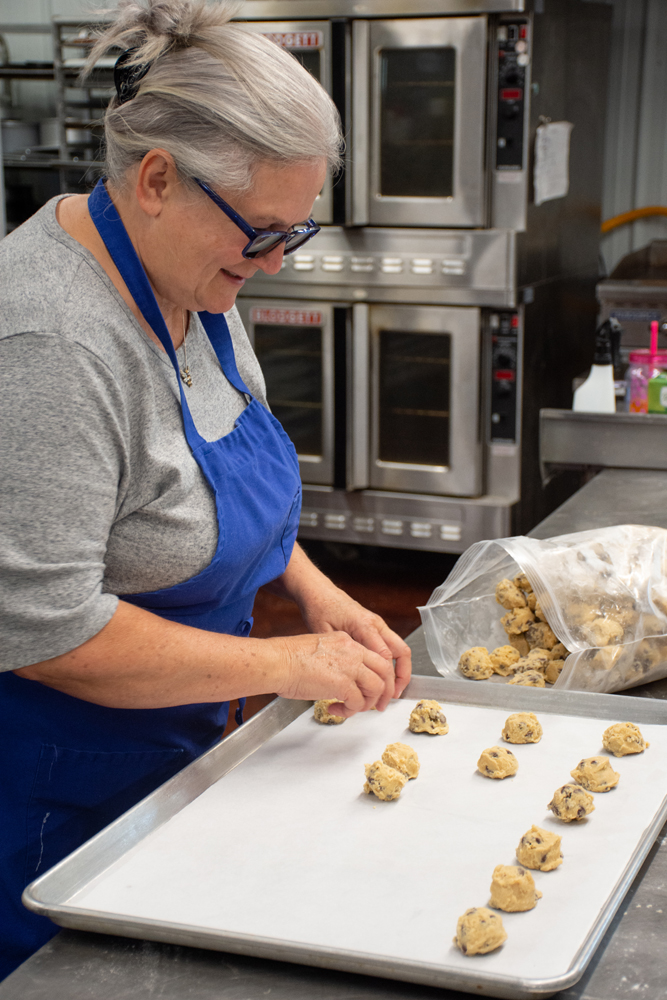 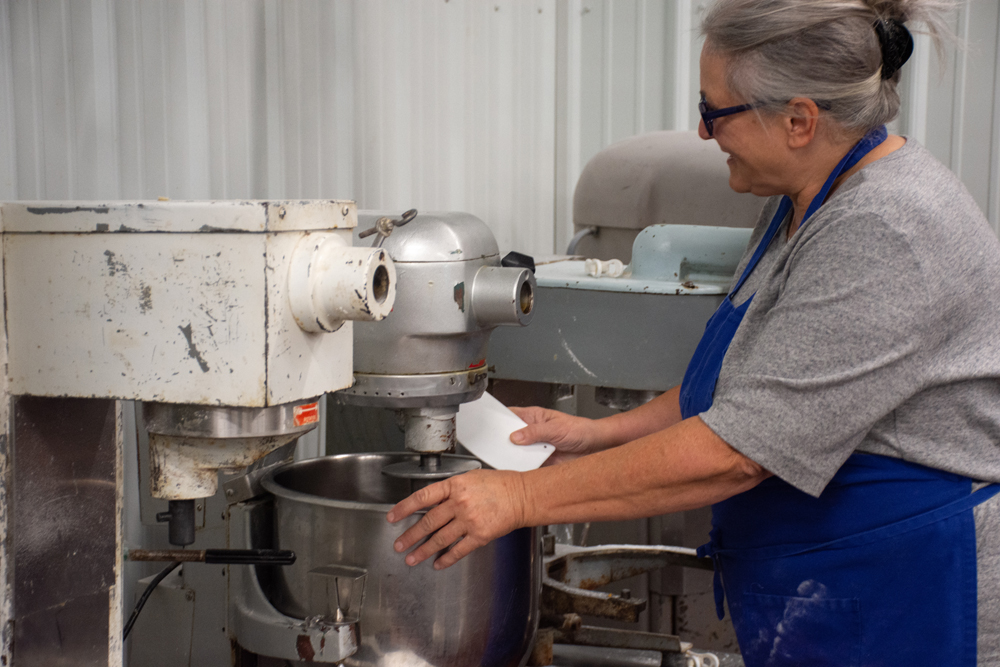 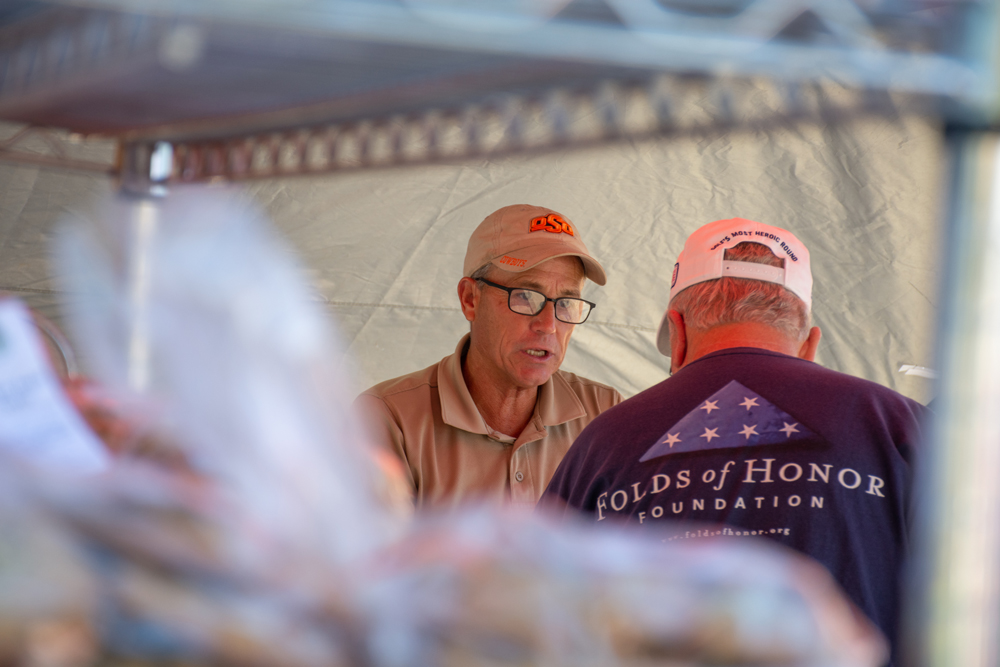 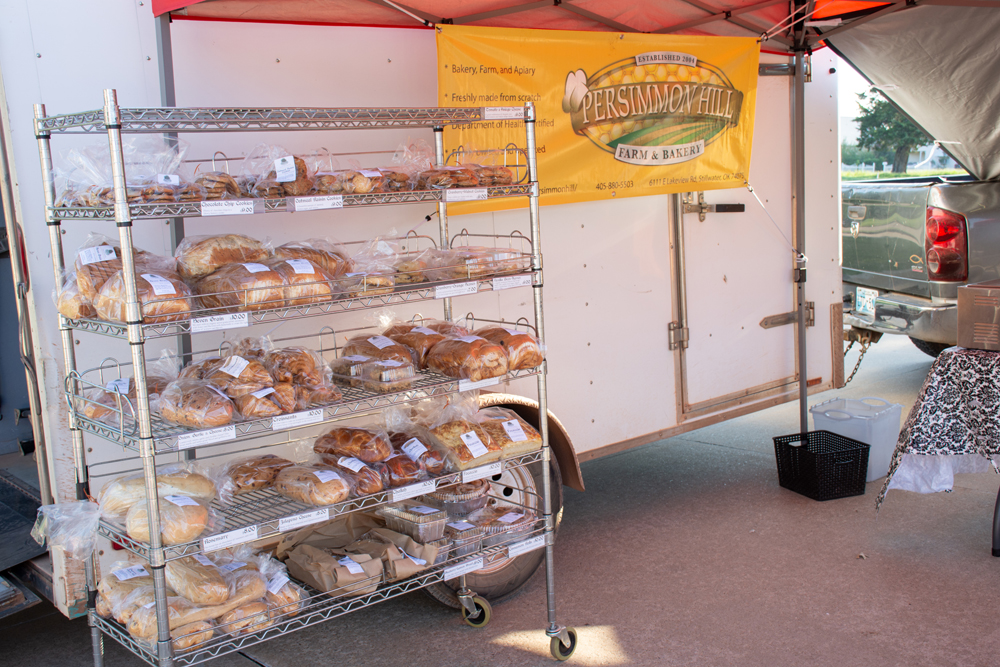 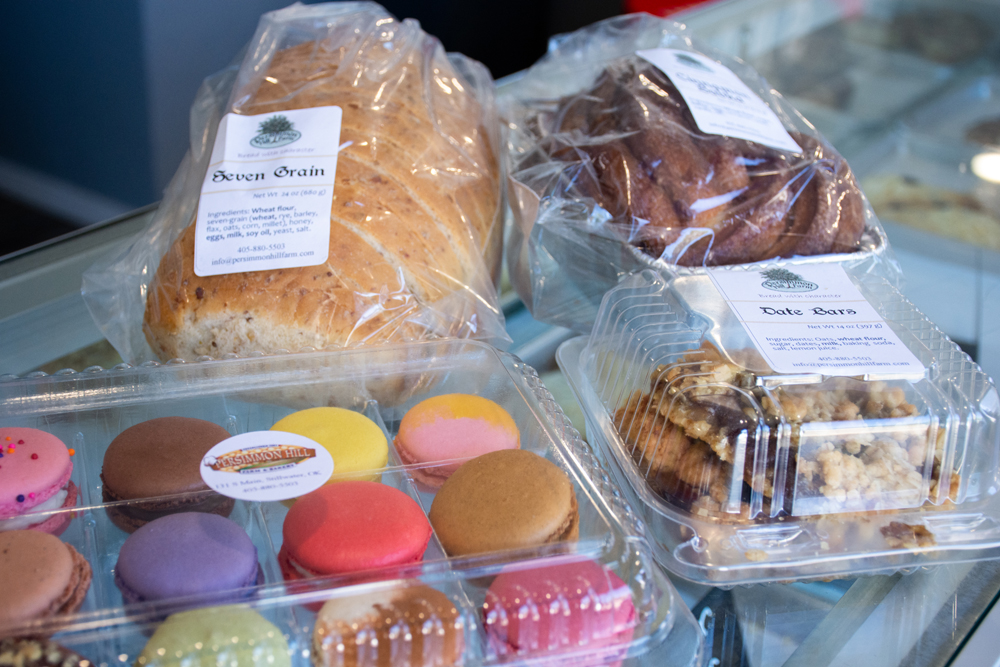 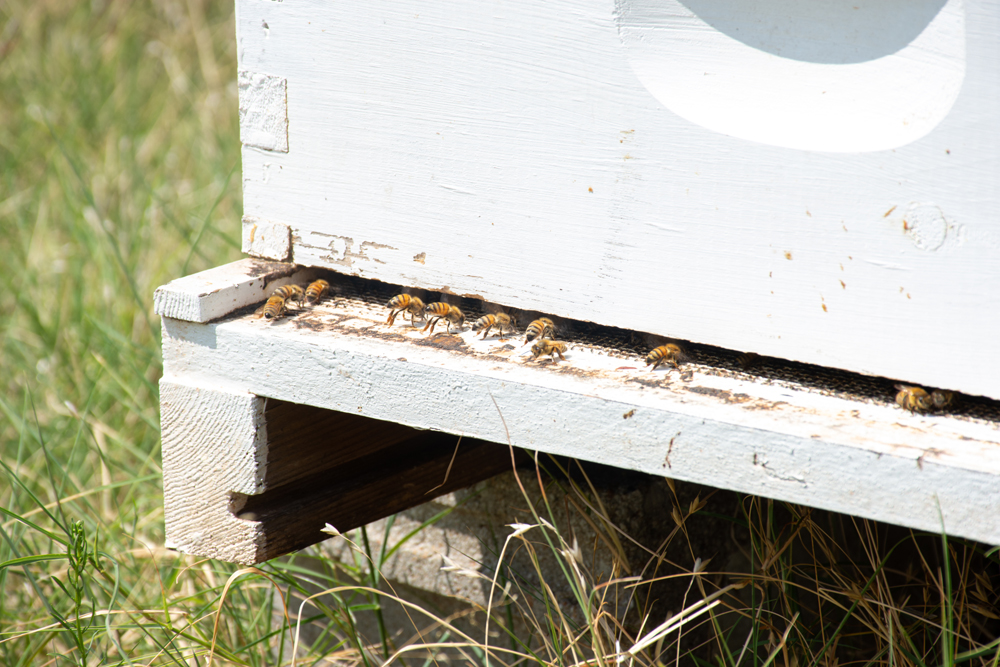 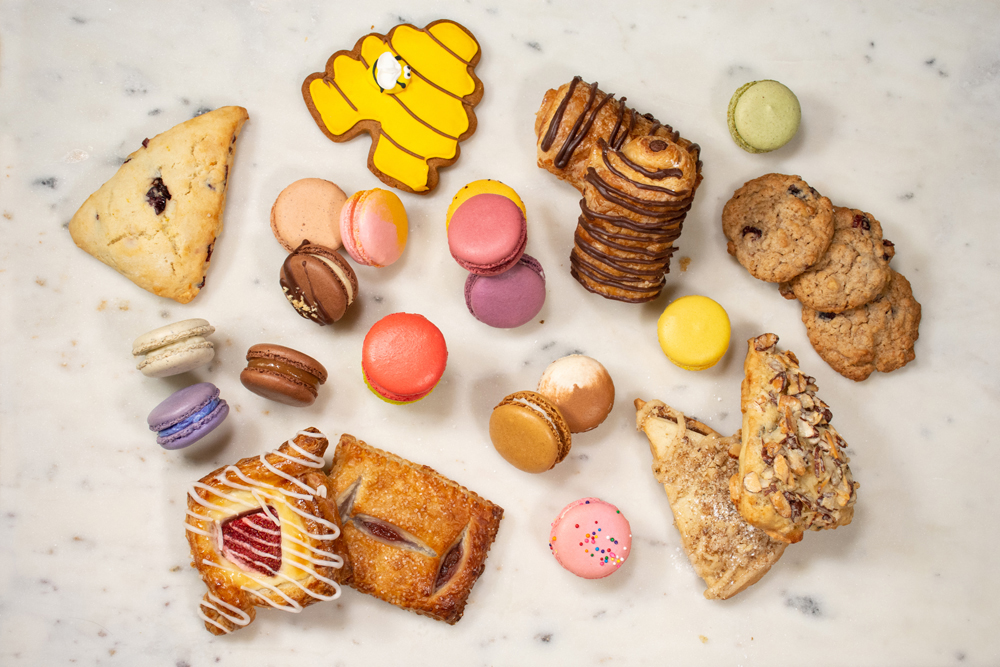 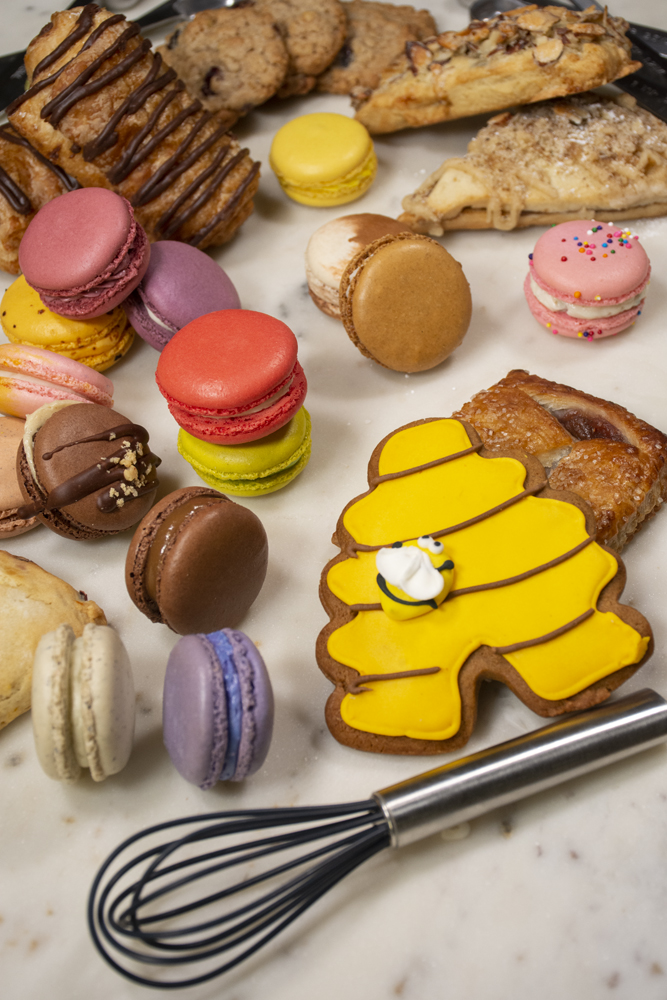