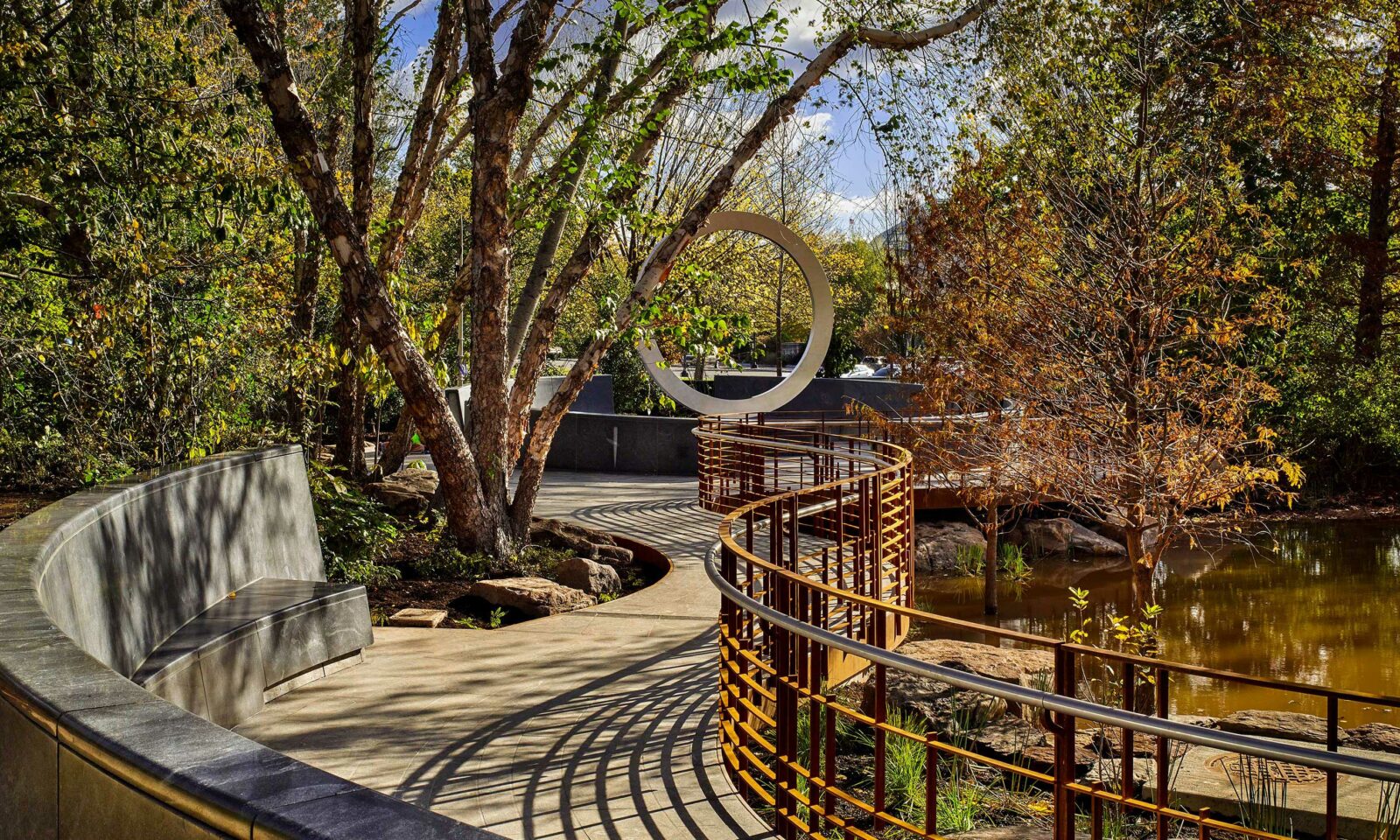 Learn the inspiration behind the Warriors’ Circle of Honor

It began as a dream. While helping with the Office of Veteran Affairs for the Cheyenne-Arapaho Tribes, artist Harvey Pratt was approached by the director about a proposed memorial for Native American veterans. He persuaded Pratt to attend meetings about the project to be installed on the grounds of the Smithsonian’s National Museum of the American Indian in Washington, D.C.

The director wanted Pratt to submit an idea, but Pratt demurred, “They probably have someone already in mind.” The director persisted. Relenting a bit, Pratt responded, “Let me dream about it.” And he says, “That’s what I did.”

Pratt, who is Cheyenne, Arapaho and Sioux, grew up learning from his parents and elders about tribal traditions, ceremonies and spirituality. “But,” he says, “how do you represent 573 federally-recognized tribes?”

Although each tribe has its own interpretations and stories, Pratt looked for common elements: fire, water, air, and earth; cardinal directions; colors; and symbols. Pratt was taught by his grandfather William Guerrier that they were people of circles following a path of life.

The completed design, “The Warriors’ Circle of Honor,” features a winding path through a freshwater wetland leading to the heart of the memorial where a large, stainless steel circle sits atop a carved stone drum. Water flows from the drum, and a fire, which will be lit on ceremonial occasions, is at the base of the circle. Benches for contemplation ring the area with entry points indicating the four cardinal directions. Nearby, four lances with eagle features provide a place to leave prayer cloths.

Pratt’s design was one of 120 submissions. When asked about the importance of Pratt’s design, Rebecca Trautmann, the memorial’s curator, cited a quote from the jury selection document, underscoring why Pratt’s submission resonated with them. The jury noted “The design is culturally resolute and spiritually engaging. The circle is so profoundly important in all Native cultures that the supreme strength of this design is its ability for all people to connect with it and find meaning in it.”

Submitting his concept was just the first step. Once the design was chosen, Pratt needed to work with dozens of experts to make sure the memorial met all the environmental and structural specifications.

While making the important decision of the memorial’s actual location on the grounds of the National Museum of the American Indian, Pratt and consultants looked at several sites. As they were looking at the fifth site, a hawk flew down, landed and paced a spot on the ground. It then landed on a nearby tree. One of the observers said, “It’s an omen.”

And that spot was chosen. The hawk frequently returns to the tree overlooking the memorial.

The official dedication of the memorial will be held on Veterans Day, November 11, followed by a weekend of celebration including music, processions and other cultural events. Activities on the 11th will be live-streamed.

He and his wife, Gina Posey Pratt, members of Central Rural Electric Cooperative, live in rural Logan County where he has his studio. Gina Pratt manages the art business. Harvey Pratt was destined to design this memorial not only because of his heritage and his talent as an artist, but also as a veteran. He was born in El Reno and educated at St. Patrick’s Mission School in Anadarko. By the time he enrolled at Central State College (now UCO), he was already selling artworks.

Pratt joined the Marines, serving in Vietnam with a special operations group – a reconnaissance outfit whose mission was to rescue downed helicopter crews. The job was harrowing and dangerous and, at the time, hush-hush.

After returning home, he joined the Midwest City Police Department. He was serving as a patrol officer and painting in his spare time. After a picture of his artwork appeared in a local newspaper calling attention to his talent, he was asked to make a sketch based on a witness’s description. His first effort resulted in the capture and conviction of a killer and word of his prowess spread. He learned 3D reconstruction techniques, inventing new techniques of his own, and became internationally known and called upon for his forensic talents.

In 2017, Pratt retired from the Oklahoma State Bureau of Investigation having served as a forensic artist, agent and narcotics investigator, as well as assistant and interim director.

Pratt has received many honors over his lifetime. He’s a Cheyenne Peace Chief and has been inducted into the Oklahoma Law Enforcement Hall of Fame, the Oklahoma Hall of Fame and the Oklahoma Military Hall of Fame. The dedication of the memorial will highlight another outstanding achievement.

His work is the final memorial placed on the National Mall. And, he says, “It’s the only memorial with an accompanying sound system and the only one completed on time and within budget.” He adds, “No public funds were used in construction; the memorial is totally funded by donations. It’s a beautiful tribute to all those Native Americans who have faithfully served their country.”