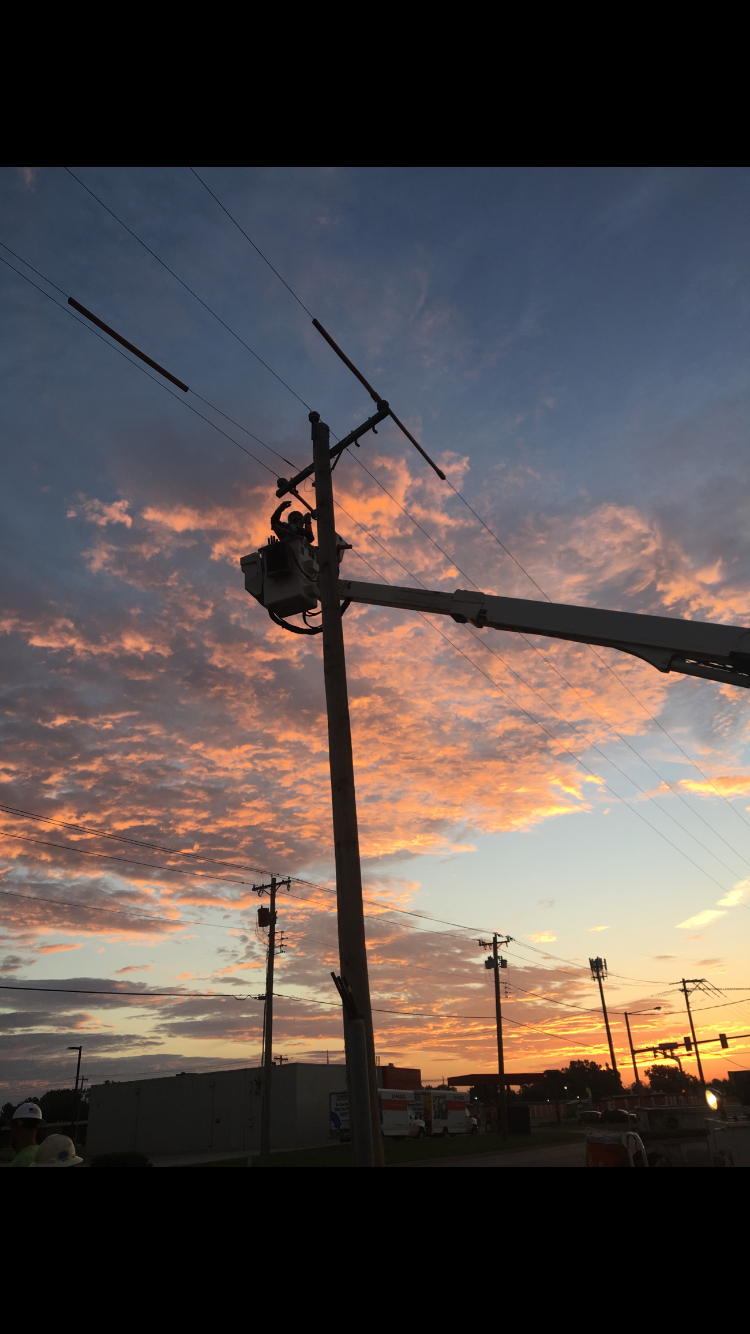 Linemen pass on knowledge to the next generation

In the middle of the night when storms rage and the lights go dark, the men and women of Oklahoma’s rural electric cooperatives go to work restoring power. Whether they realize it or not, their children grow up to understand and respect the importance of what their parents or grandparents do for a living. Years later, it’s not surprising when some of these children choose similar career paths. The life of a lineman can be dangerous and thrilling, but it’s also a family profession where skilled employees are in high demand. Rural electric cooperative linemen enjoy the comfort of a locally owned company with good pay, benefits and a reliable retirement plan. From one generation to the next, linemen learn to love their jobs not only because of the crew camaraderie and adrenaline rush, but also because it’s meaningful and makes a difference in people’s lives.

Adam Cheek spent 18 years on a line crew at Indian Electric Cooperative before switching over to the meter shop to oversee metering, breaker checks and other duties while continuing lineman work. His grandfather, Harley Flight, retired from Indian Electric, and while they never had the chance to work together (Flight passed away in 1998), Cheek has crossed paths with some of his grandfather’s coworkers.

“It’s neat to go out and do something where he might have been in the exact same place 30 or 40 years ago,” he said. “I’ve worked on older poles—ones that he may have set on past jobs.”

Cheek likes the kinship of his crew and the support and familiarity it provides when working with the same people every day.

“You spend more time with them than your family,” he said. “Sometimes I can tell what my foreman is thinking before he even says it.”

At the age of 38, Cheek has been a lineman for half his life, but the job never gets old.

“I like the adventure of it,” he said. “It changes every day, and out in the field there’s always a lot to learn.”

From back yards to the backcountry, when Cheek and his crew are called out to repair lines in crazy weather and extreme temperatures, he often thinks about his grandfather. Flight devoted his life to the job, and Cheek is glad he can carry on that tradition. Now that he is a father, Cheek wonders if his own son might become the third generation to pursue the same profession as his grandfather.

“I’d like to think I’ve touched some of the same hardware,” he said. “I’d hope he’d be proud to know I’m working where he once did.”

Chris Slaughter had plans to work in law enforcement and join the Oklahoma City Police Department after high school. While waiting through the lengthy application process, his father, Cordis, persuaded him to apply at Oklahoma Electric Cooperative (OEC) for something temporary. Eleven months later when OKCPD offered Chris a job, he turned it down to continue his career in the electric utility field.

“When I was a kid, I had never really thought about being a lineman, but I ended up loving my job at OEC, so I stayed,” he said.

Chris soon will celebrate his 10-year anniversary at OEC where he currently is a foreman. Cordis dedicated 34 years to the lineman profession in Oklahoma and Virginia before retiring as an operations manager from Canadian Valley Electric Cooperative in Seminole, Oklahoma. Cordis’ administrative role required more office work and less of a presence with crews in the field, but he took every opportunity to get outside and interact with linemen in activities such as pole rescue training.

“He was one of the only ones to do that training every year,” Chris said. “He liked getting out and helping the guys. I can remember him taking calls some nights for outages just because he enjoyed that part of the job so much.”

Serving as a police officer was his original dream, but Chris has grown to cherish the close friendships he has working outdoors with a dependable crew to accomplish a common goal.

“We all know each other’s families, and everybody takes care of each other,” he said. “The crew atmosphere is close knit—like an extended family.”

Wade Hurst signed up for the military after high school with big plans to cross train and work on power lines for the government. However, he was assigned to a different area of specialty and didn’t have the chance to pursue a career in the electric utility field until after his service ended. He completed lineman training at Pratt Community College in Pratt, Kansas, and began working for a contractor that also employed his father, Gary. Wade said those four years with his father were entertaining and adventurous, and his dad made sure he was exposed to all elements of the job.

“Let’s just say there wasn’t any favoritism shown toward the general foreman’s son,” Wade said. “I endured all of the trials and tribulations of being a young apprentice lineman.”

Gary was a lineman for 35 years, traveling the southern half of the United States for a majority of that time. He returned home to Stigler, Oklahoma, and took a job at Cookson Hills Electric Cooperative. Gary also worked as a foreman for other companies, overseeing three or four crews at a time. Since his death, Wade remembers him through the line of work they both love.

“Back then, you could go just about anywhere in the United States for a job if you were a journeyman lineman,” Wade said. “I knew this was a good career field to go into because I had seen him do it for so many years.”

Wade was a Cookson Hills lineman for 12 years in Sallisaw, Oklahoma, and Stigler. Today, he works for the Oklahoma Association of Electric Cooperatives, managing safety and training for all of the co-ops in the eastern half of the state. According to Wade, the next generation of skilled professionals is poised to follow its parents into the co-op industry.

“The number of linemen and young ladies has jumped quite a bit within the past five years,” he said. “I’m pretty sure we’ll be just fine.”

Steve Shrum discovered his love for line work while in the maintenance department at East Central Oklahoma Electric Cooperative. He joined East Central in 1979 to train as a meter technician and worked his way up to the current role of superintendent.

“Going wide open, getting people’s power back on, finding problems and solving them, and getting lines back up—that all gets in your blood,” he said.

Memorable weather events shaped Steve’s career such as an ice storm in 2000 that affected the Checotah and Muskogee, Oklahoma, areas. He had been in charge of his crew for six months and had a lot to learn.

Steve has seen many storms since then, but he isn’t the only one in his family to brave the elements and fix lines. His son, Brad, has worked six years in transmission for KAMO Power in Muskogee.

“My tools and work truck were always at the house, and I’m sure he tried on my hooks or tried to climb a pole growing up,” Steve said. “I wasn’t going to push him toward line work, but I can’t tell you how proud I am of him.”

As a kid, Brad rode with his dad on service calls learning tasks such as reading and checking voltage, but he hadn’t considered becoming a lineman. After college, he worked in other fields but wanted to find a career instead of a job.

“I called dad for advice,” Brad said. “Those times he let me ride along, I saw and learned a lot. It’s something I’ll never forget.”

Brad graduated from High Voltage Lineman School at the Oklahoma State University Institute of Technology in Okmulgee and completed several internships to launch his career at KAMO. Although father and son are employed at different companies, they work closely in the same rural areas.

“We’ve had some learning experiences. It’s been fun and rewarding,” Steve said.

First generation lineman Guy Dale is a 26-year veteran of Choctaw Electric Cooperative who served 15 of those years on a lineman crew. Today, as safety and loss control director, he manages Choctaw’s fleet transformer meter department along with purchasing, dispatch, warehouse operations and more. Guy chose the career field because he liked working with electricity and he wanted to stay local.

“It’s constantly a mental challenge,” he said. “You never stop learning, and there’s something different every day.”

“On father/son day, he would come to work with me, and he saw how our crew enjoyed working together,” Guy said. “Even though it’s a serious job, he saw how I looked forward to going to work and how we could have fun too.”

Now, Guy and Dustin compare notes and swap stories about their lives in the electric co-op world. Guy admits it was initially scary to think about his son following in his footsteps, but he is encouraged by the vast amount of training opportunities and safety standards that are required.

“I think that’s one of the reasons my son wanted to be a lineman,” he said. “At a small co-op, there’s not the pressure from investors to keep making money. It’s a closer atmosphere where we all get along and enjoy what we do.”