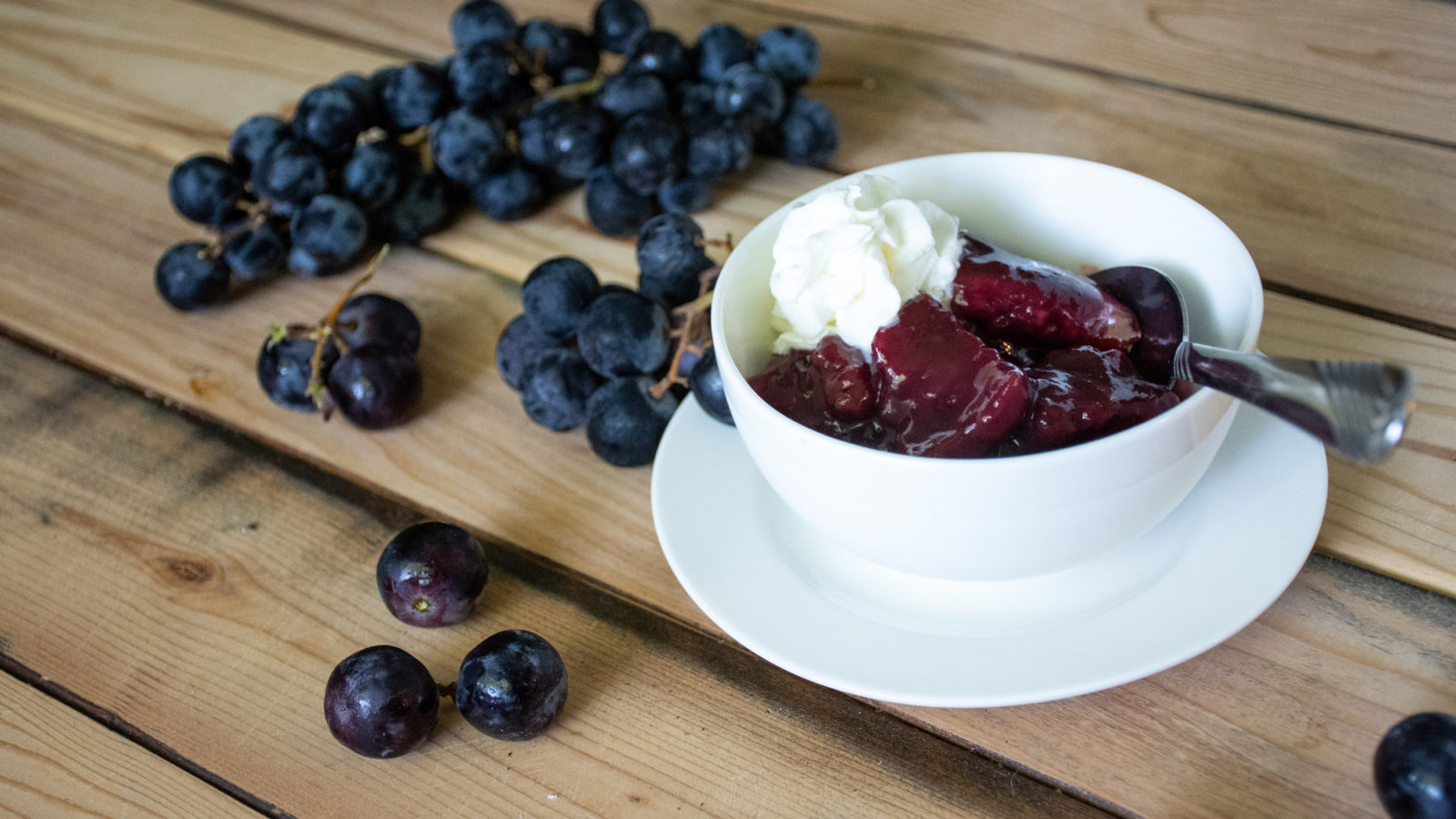 At first glance, the dessert looks a bit like a purplish-reddish stew. Dense and sweet dumplings swim in a syrup scented with the fruit of a vine, and although tangy, it is also sweet enough to bring sighing tears to the eye.

Grape dumplings are more than a doughy, cloying treat. For many Native American tribes, the dessert harkens back to their homelands in places like Mississippi, Georgia and Tennessee where tiny wild grapes grew as plentiful as kudzu does today.

Grape dumplings—like many dishes passed down from grandmothers and mothers—are made differently in every kitchen, but magic happens in the simplicity. The flour from the dumplings naturally thickens the grape juice to make a purple gravy.

At the Aaimpa’ Cafe at the Chickasaw Cultural Center in Sulphur, visitors can try this unique dessert. Just like fry bread, it’s a dish almost exclusive to the Native Americans who now call Oklahoma home.

For the Chickasaw Nation, it’s also a reminder of the importance of the cultural cuisine of Native Americans and a testament to how resourceful the First Nations people were as an agricultural and culinary society.

Steven Looney helps keep the historic dessert alive at the Aaimpa’ (“a place to eat”) Café. As chef supervisor, Looney has perfected the dessert, but its history sweetens back to well before the forced removal of the Chickasaw people from their homeland in the southeastern part of the United States.

The grape dumplings are historically made with the juice of native grapes called “possum grapes,” but today are typically made from boiling biscuit mix in frozen grape juice. While plentiful in other states, the grapes do not grow as well in Oklahoma.

“After the Chickasaws were removed from their homelands to Oklahoma, the United States government started giving commodities to the Native Americans. In those packs of food, they would have gotten grape juice,” Looney says.

Today’s grape dumplings are popular for other tribes as well. Mike Wells of Stillwater, who is a member of the Umo`ho tribe of Nebraska, remembers his mother and aunts preparing the dessert when he was a child.

“The grape juice is boiled until it is almost like a thick syrup, and dumplings are flat rectangles cooked in the juice,” he says. “The dough for the dumplings is also sweetened a little bit with sugar and grape juice. It was very filling.”

Looney believes food history is a powerful part of any culture.

“If you can recognize a person’s cultural food history, you essentially have a grand scale look at the struggles and the accomplishments throughout their history,” Looney says. “Luckily, we had elders who held onto the coals and embers of our history, and now we have the Cultural Center and cafe, and our fire burns hotter than ever.

Place flour in a heap on the tabletop. Make a well in the center of the flour and crack an egg into it. Using a fork, mix the egg into the flour and add water as you go. Form the dough into a ball and roll out very thin. Cut into 1-inch squares. In a large pot place grape juice and sugar to taste. Bring to a rolling boil. Drop dumplings into boiling grape juice. Mix 1 tablespoon cornstarch in 1 cup cold water. Add to hot grape juice. Cook for a few minutes and serve hot.