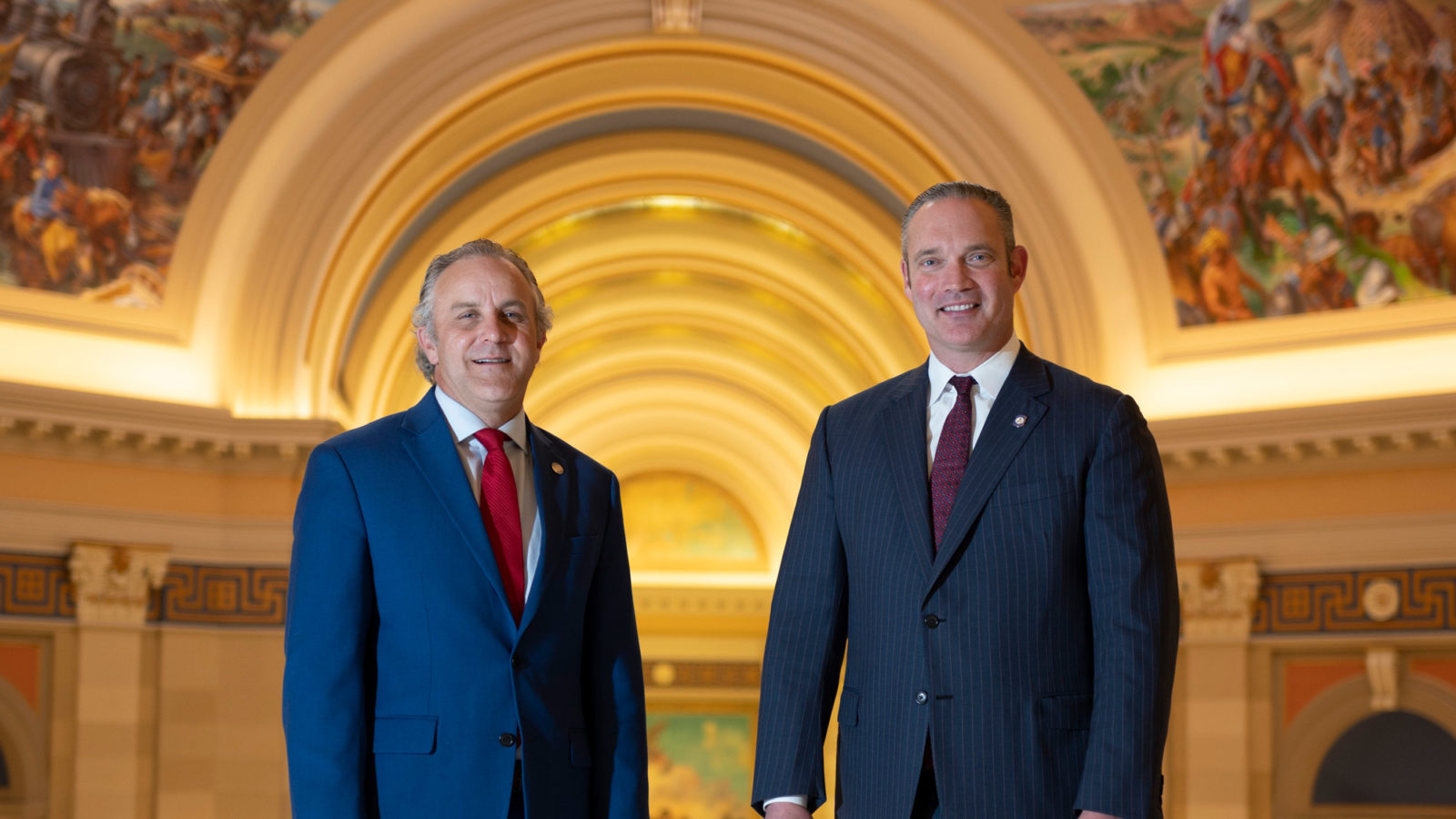 It’s an easy metaphor for Oklahomans to compare politics to a rivalry football game. Offense pitted against defense; yellow penalty flags scattered across a grass-torn field amidst a stadium filled with palpable tension.

In reality, government is more of a team effort than it is often portrayed. To move the ball down the field, legislators have to work together to create policies that allow Oklahomans and our economy to thrive.

Each February, Oklahoma Living strives to responsibly educate our readership on an aspect of our state government. Oklahoma’s legislative branch is divided into two chambers that function independently, but a proposal must pass both chambers to make its way to the governor’s desk to become law. This year we are highlighting how the leaders of both chambers, House Speaker Charles McCall and Senate President Pro Tempore Greg Treat, are committed to maintaining an atmosphere of civility at the state Capitol.

Sen. Treat is a husband of 16 years to Maressa and a father to three children: Mason, Cooper and Olivia. He enjoys coaching sports and helping with homework.

Although most of his free time is spent at home, he does enjoy getting out for the occasional rabbit hunt. He still remembers his dad giving him his first shotgun, a 410, and wading through the briar patch, rustling up rabbits for his dad.

Those hours spent at dawn or dusk were special. His father, a hard-working member of the Tulsa manufacturing industry, inspired Treat’s work ethic he maintains to this day.

“I watched my dad leave before I got up and return home late every night,” Treat says. “I knew from a young age the importance of getting a job done and getting that job done right.”

Treat never intended to pursue a career in government, but passion for key issues drove him to the state Capitol. Prior to being elected to the Senate, Treat worked as the legislative director for the Oklahoma House Republican Caucus. Treat then served as state government liaison and field representative for U.S. Senator Coburn. During this time, he was moved by Coburn’s early morning rounds with patients and long days serving the people of Oklahoma.

Another lifelong Oklahoman, Rep. McCall has spent his entire life in the southern part of the state. He and his wife, Stephanie, raised their two sons, Chase and Carson, in Atoka. Newly empty nesters, they now enjoy additional time in the community and with one another.

He feels planting his family within the atmosphere of agrarian culture was an ideal scenario. His sons love to fish, hunt and play golf, and McCall says he’s grown to love what his kids are passionate about with each passing year. On this past Christmas Eve, he got to spend a few precious hours hitting the greens with both his boys.

McCall’s father made the biggest impact on his leadership style. He describes him as a selfless servant, not driven by an agenda, but instead focusing on making those around him successful. As such, a career in public service was not on McCall’s mind, but following a seven-year stint as mayor of Atoka, he was elected to represent House District 22 in 2012. McCall continues to carry with him the rural outlook of “neighbors helping neighbors.”

“In rural Oklahoma, you don’t have a ton of population, so big undertakings require people to come together,” McCall says. “Our work at the state Capitol is guided by the same mindset.”

Each leader asserts there are major differences between politics at the federal level and what happens during Oklahoma’s legislative session. The harsh polarization often portrayed in the headlines isn’t a reality for their work at the state Capitol.

“Oklahoma is very much a reflection of Oklahomans,” Treat says. “We work together, we have diverse backgrounds—we are in it together.”

There is more collegiality among parties than one would expect. Treat and Senate Minority Leader Kay Floyd make a point to speak together once a week. He acknowledges they may disagree on nuances, but he believes both parties are driven by the desire to move Oklahoma forward.

Sen. Floyd agrees they maintain a good working relationship. As a former administrative law judge, protocol and procedures are important to her, and she appreciates Treat’s joint commitment to ensuring order is followed.

“Politically we may not agree on much, but we don’t have to make it political when we discuss issues,” Floyd says. “We actually like each other.”

Likewise, McCall schedules time to have regular conversations with House Minority Leader Emily Virgin. He says their differences are how government is intended to work. By managing ideas, trading perspectives and being willing to give and take input, he feels the dynamic between parties and the chambers is in a healthy state.

Rep. Virgin has been encouraged by their relationship and says they share a mutual respect not only for each other, but also for the positions they hold. It has been her experience, when she needs to meet with the speaker, his staff makes her a priority.

“There are distinct advantages when comparing Oklahoma’s legislature to federal counterparts,” Virgin says. “We are on the House floor truly working with each other and listening to each other debate. It’s a lot harder to attack someone when you know you are going to be sitting next to them the next day.”

“Understanding relationships in this building is the most important ingredient in the recipe for getting things done,” McCall says. “You can disagree without being disagreeable.”

The controversial bills that often grab headlines take up little of the leaders’ time. Most of the leaders’ time is spent on drafting the multi-billion-dollar state budget that must be resolved in five months by session adjournment. The budget impacts all state agencies, like education, corrections and transportation.

“There are ways we can always do better when it comes to issues that impact Oklahomans’ lives,” Treat says. “However, it is important to have some inefficiencies built into the process to ensure all decisions are deliberative.”

Rash actions are prevented by the process. Legislative bills must be introduced by a member of that chamber. For example, a House bill must have a representative author. The bill then goes through multiple readings, committee assignment and committee vote before a chamber vote. If it is passed by the originating chamber, it must then go through the same process in the other chamber.

Both McCall and Treat “kick off” the process each session and have the power to take several actions within their roles, including appointing a floor leader, naming and appointing committee roles and assigning bills to committees.

Both are guided by the same goal: ultimately for the people’s concerns to be heard and a successful resolution reached. There are instances when the chambers may hear of issues impacting rural electric cooperative members in the legislative and agency rule-making processes. The leaders recognize co-ops play a viable role in key infrastructure for rural parts of the state.

“Co-ops are continually making investments throughout Oklahoma where there are not a ton of customers,” McCall says. “The pandemic exposed the lack of broadband infrastructure in rural parts of the state, and it’s amazing for me to see the co-ops providing not only electricity, but also broadband to underserved areas.”

Treat agrees safe, affordable, reliable and environmentally responsible power is a crucial core of economic development and a selling point in recruiting businesses and people to the state.

“Not only is reliable power critical to Oklahomans’ lives, but it’s also important for our growth, expansion and livelihood. I want co-op members to know the leadership of Oklahoma recognizes the value co-ops provide.”

It is important to remember co-op members have a voice within their rural electric cooperatives and at the state Capitol. Although governance is not a game, every member has a chance to be a team player. No matter the side one roots for, at the end of the day, a win for Oklahoma is a win for all.