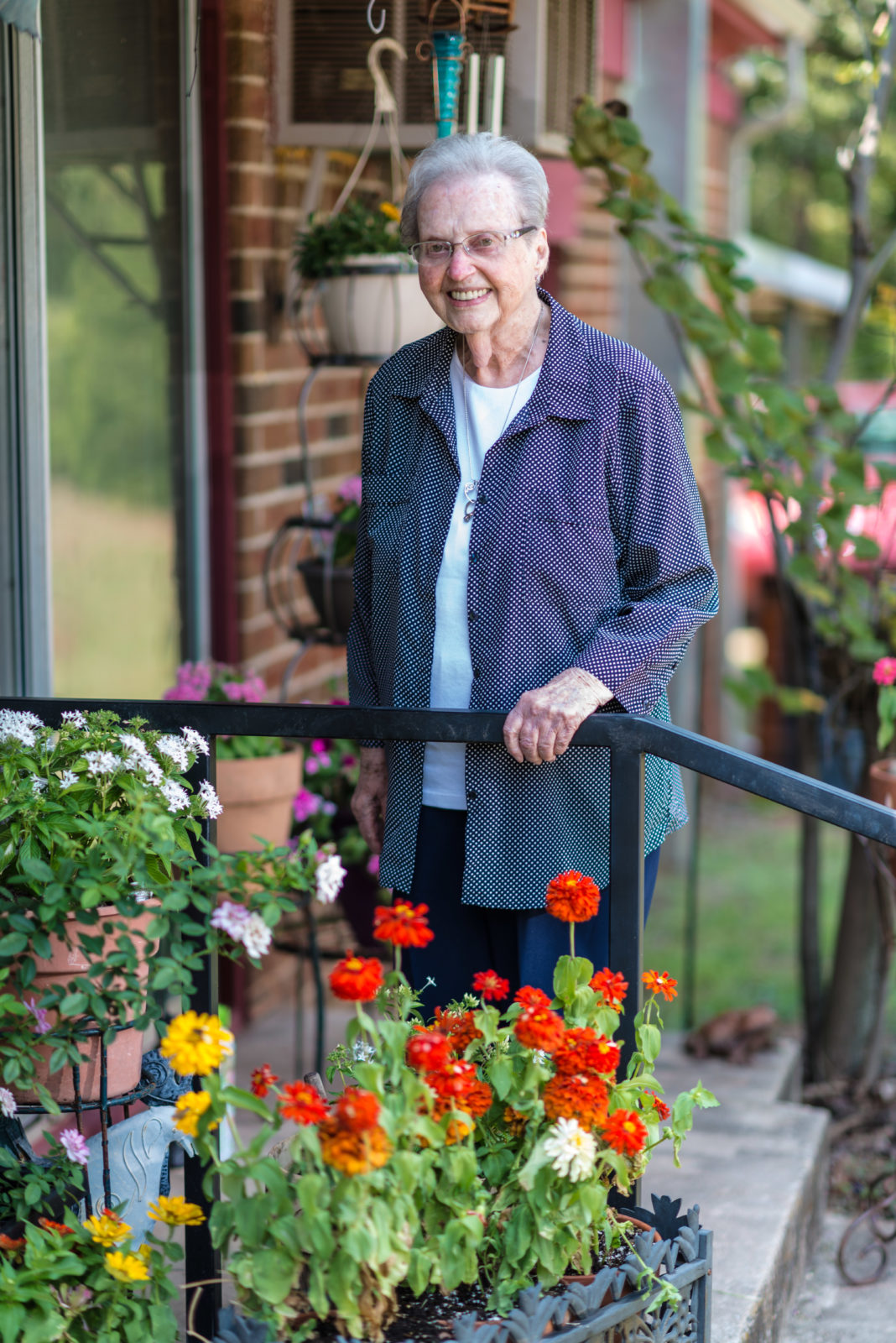 On a sunny Friday afternoon, a Central Electric Cooperative truck drives through Luther, Oklahoma. Winding through the co-op’s service territory in north-central Oklahoma—going about the utility’s day-to-day business—the truck passes by the Booher family farmstead. If Carl Booher, born in 1899, were to catch a glimpse of the truck, it would bring a sense of fulfillment and accomplishment.

While he was unable to witness the co-op truck passing by his farm recently, his daughter, Virginia McClain, lives on the property and daily enjoys the fruits of her father’s labor. Following in his footsteps, Virginia created a legacy of service for Oklahoma’s rural electric cooperatives. This National Cooperative Month, hers is a story worthy of being told.

Virginia was born in 1923 to Carl and Bess Booher. The oldest child, she had one younger brother, Ed Patrick. Her parents acquired a farming property in Luther in 1926. Booher operated the farm and ran a dairy. Virginia recalls her father was also a dirt farmer. In a 1989 CREC newsletter, Booher described the routine of his day: “I would wake up at 4 o’clock to stir the cows. Then I’d milk all of them by hand. It was real milk then, too, not like what you buy today.”

Virginia has many special memories of her childhood and teenage years on the farm—though none of them involve electricity. Throughout her childhood in north-central Oklahoma, Virginia was brought up without electric service. When she graduated from Luther High School in 1941, her family’s farmhouse still did not have electricity.

“I remember OG&E had a power plant 10 miles from our property. Dad contacted OG&E about getting electric, but we were told it would cost nearly $8,000 a person. He then got busy with the Rural Electrification Administration (REA) movement,” Virginia recalls.

Life on the farm was joyful, but not without its toils.

A famous pie maker, Bess Booher had her system down in the household’s kitchen. When Carl Booher woke at 4 in the morning to milk the cows, Bess would have hot biscuits and some type of meat ready—usually rabbit or squirrel—for a hearty breakfast. For lunch, Bess cooked big meals on her wood stove. After lunch, she would place a tablecloth over the leftovers for supper. Virginia recalls a water reservoir in the kitchen where they washed dishes.

Running water was another commodity the Boohers lacked. Virginia recalls her father set up a farm tower with a barrel on top, filled with water; a windmill was connected to it. If the wind blew, they would have water from the tower, but if not, they were ready to manually pump water.

“We had to wash our feet in a big tub of water before entering the house,” Virginia says.

In the evenings, her parents were able to access a radio in the car; after some time, Carl and Bess Booher used a wind charger to power a radio. This was their evening entertainment as Virginia recalls her parents listening to baseball games and her mother keeping scores of the games. She still has the scoring sheets her mother used.

Once darkness set in, Virginia remembers using kerosene lamps to light their home.

“I was the one who had to clean the chimneys, which I was glad to clean with newspapers,” she remembers. “Mom and dad read books out loud to us. Mom did a lot of sewing and needle work in the evenings. We had to go to bed early.”

In the early- to mid-1940s, the Booher farm—along with several other farms and ranches in the area—received electricity for the first time.

During an interview with CREC in 1989, Carl Booher shared some of the members’ sense of gratification and wonder when they first received electricity: “They (the members) were so grateful to get electricity. They were also amazed at it, couldn’t understand how it worked. One gentleman commented after he had lights that it was the first time he’d ever seen his wife without daylight. It is unbelievable how important the REA and the cooperatives were to the folks in this area, and to the farmers especially.”

When electricity finally arrived at the Boohers’ farm, Virginia was already off to college to begin a journey of her own.

Upon graduation from Luther High School, Virginia attended Hill’s Business University in Oklahoma City where she developed typing, shorthand, filing and bookkeeping skills. Her first full-time office position was working as a secretary for Scannell-Cockran Commission Company Oklahoma City Stockyard, a job she held for a few years before marrying U.S. Navy officer Harold Edward McClain in 1944. As newlyweds, the McClains had to be separated for a season as Ed McClain received orders to be shipped overseas to Japan in an oil tanker. In 1946, the McClains had their first child, Richard, followed by Mary Beth in 1950 and John Edward in 1953. At that time, Carl Booher served as a board member both at CREC and at the Oklahoma Association of Electric Cooperatives (OAEC), a trade association representing all electric cooperatives in Oklahoma. OAEC, established in 1942, was housed in a small office space at the Department of Agriculture in the State Capitol. With three employees, the OAEC management saw a need to add a fourth staff member to assist with secretarial and administrative duties. When Carl Booher heard of the opportunity, he made a recommendation for Virginia to be considered. To make the decision even easier, the McClains were residing across the street from the OAEC office. In 1952, Virginia McClain began part-time employment at OAEC; she became a full-time employee in 1953.

“I walked in and felt right at home. Everyone was cordial and friendly. My dad used to tell everyone, ‘She is the best daughter I have ever had,’” she recalls with a smile.

It was the beginning of a long and fulfilling career. The McClains lived in Oklahoma City until 1961 when Ed McClain built a home on the Boohers’ family farming property. Virginia recalls he did most of the work, but hired some help to pour a slab floor, do plumbing and set up shingles. The McClains built an all-electric home with a geothermal unit. Virginia began a new routine of commuting from Luther to Oklahoma City for her job at OAEC. Since the OAEC office was located near the State Capitol, she was able to carpool with others who worked near the Capitol. In 1971, OAEC acquired a facility in north Oklahoma City. She continued her career journey with electric cooperatives, which would span four decades.

A Lifetime of Service

As OAEC’s office manager, Virginia had multiple duties. She was in charge of payroll, benefits and paying bills. Additionally, she was busy receiving and organizing quilt patterns from readers across the state for publication in Oklahoma Rural News, now Oklahoma Living magazine. During most of her tenure, there were no computers, electric typewriters, or even electronic postage machines. She recalls the time-consuming process of folding letters, stuffing and licking envelopes, and typing addresses.

As is common in the electric cooperative network, Virginia felt at home and saw her co-workers and fellow co-op peers as family.

“Everyone would help each other out. When we were done with our tasks, we would check and see who needed help. It was a good workplace, always upbeat,” Virginia recalls. “We used to have potluck meals and they would always ask me to bring homemade rolls.”

During her co-op career, Virginia had the opportunity to serve as a chaperone for the 1980 Rural Electric Youth Tour, an all-expenses-paid trip to Washington, D.C., for high school juniors. Virginia was also in charge of the OAEC Ladies Auxiliary activities during OAEC’s Annual Meeting. In this role she formed many friendships. One of her friends, Edna Bean, wrote about Virginia, “Coming to statewide, regional and national meetings, I could think of all the times that Virginia’s presence and infectious smile warmed the room. If you didn’t know Virginia when you came, you always knew her by the time you left.”

Joe Harris worked alongside Virginia for five years while serving as OAEC’s legislative and regulatory affairs director; Harris has fond memories of her.

“She was a very gracious lady. She was professional and went about her business without any fuss,” Harris says. “She was a repository of many things we had done; when we needed to remember something, we would go to Virginia and she would have the answers.”

Despite her ever-growing duties in the office, Virginia found time to dedicate to her family life as well. Her daughter, Mary Beth Wilson, recalls her mom would always have a hot breakfast ready for her husband and kids before heading out the door, and she would serve a good meal to her family in the evenings as well. How did she do it?

This same caring “mom” legacy has been passed on to Wilson, who proudly says she follows her mother’s example.

Virginia retired from OAEC in 1993, after 41 years of service. She stays busy with several hobbies. Her mother, Bess, used to keep violets, a collection she started with a single leaf from a neighbor. Virginia now maintains several colorful violets in a spare room in her house. She is an active scrapbooker, clipping important events from newspapers and magazines and creating a record on Luther’s history. She enjoys keeping photo books of family reunions. She is the proud grandmother of 11 grandchildren and 14 great-grandchildren. Four of her great-grandsons play on Luther’s Lions football team, and she plans to watch games this fall. She is also an avid OKC Thunder fan.

While she is thoroughly enjoying retirement, Virginia has vivid and treasured memories of her time with Oklahoma’s electric cooperatives. When asked what advice she would give current electric cooperative employees she says, “Hold on to your job because you are not going to get a better one. It gets in your blood.”

As an heir of rural electrification pioneers, the cooperative spirit is undoubtedly in her blood.

Cooperative: Central Rural Electric Cooperative
Category: Oklahoma Stories
Back to all stories
Virginia McClain of Luther is the daughter of a rural electrification pioneer, Carl Booher. Photo by James Pratt