Making sense of what happened during a winter blast to remember.

It was not only cold. It was bitterly cold. The state of Oklahoma was one of many states that experienced ongoing subfreezing temperatures in February. According to the Oklahoma Mesonet, a massive blast of Arctic Air landed in the Great Plains after the first week of February, bringing freezing rain that provided dangerous travel conditions. Temperatures plummeted over the next seven to 10 days culminating with historically cold air from February 14 to February 16. The longevity of this event combined with extremely low temperatures led to unforeseen challenges in the electric utility industry. Oklahoma’s electric cooperatives rose to the challenge on behalf of their consumer-members. We try to break down below why it happened, what happened, how it was handled and what consumer-members can expect going forward.

Oklahoma experienced 12 consecutive days of below freezing and extreme cold temperatures with the lowest temperature at -22 Fahrenheit and wind chills as low as -36 Fahrenheit. This historic event caused demand for electricity to exceed electric generation. Compounding this issue were difficulties with securing adequate supplies of natural gas needed to power some electric generators. Additionally, extreme cold temperatures made it difficult for some generating units to operate. These conditions placed strain onto the electric grid. 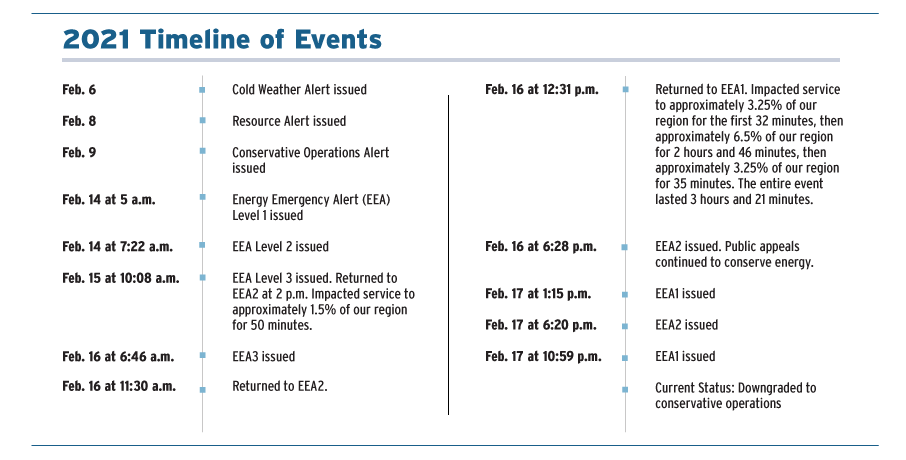 The Southwest Power Pool, a regional transmission organization that manages the grid in a 14-state footprint including most of Oklahoma, declared energy emergency alerts levels 2 and 3 for the first time in its history. As a result, coordinated interruptions of service happened twice, once on February 15 for 50 minutes and once on February 16 for a little more than three hours; these controlled outages were needed to ensure the integrity and reliability of the grid. By implementing controlled outages, SPP’s member utilities were able to lessen the chance of longer, more impactful, and more widespread outages.

While the situation was unprecedented and moved fast, Oklahoma’s electric cooperatives worked tirelessly on behalf of consumer-members and kept consumers informed throughout the event. In an effort to help with the rising demand, co-ops asked members to voluntarily conserve energy as best and as safely as possible. Co-op members statewide responded in a positive and collaborative manner to the appeals for energy conservation. Electric cooperatives statewide say that members’ conservation efforts made a positive difference.

Any increases on February bills were a direct reflection of higher energy usage, as electric cooperative rates did not change. Co-ops across the state are working with members on an as-needed basis to offer flexible payment options in an effort to minimize impact to the member as much as possible. Generation and transmission cooperatives and their member distribution cooperatives are evaluating the financial impact of exceptionally high natural gas prices. Once rising fuel costs are fully determined, electric cooperatives and their member-elected boards will implement a low-impact plan to recover costs.

Level 1 signaled SPP’s available resources were scheduled to meet load but could foresee issues to maintain contingency reserves. Level 2 signaled the grid could no longer meet expected energy requirements without the utilization of reserves or assistance from neighboring utility operators. Level 3 signaled operating reserves were below the required minimum, causing SPP to direct member-utilities to implement coordinated interruptions of service twice, which are controlled, temporary outages.

Category: Tech
Back to all stories