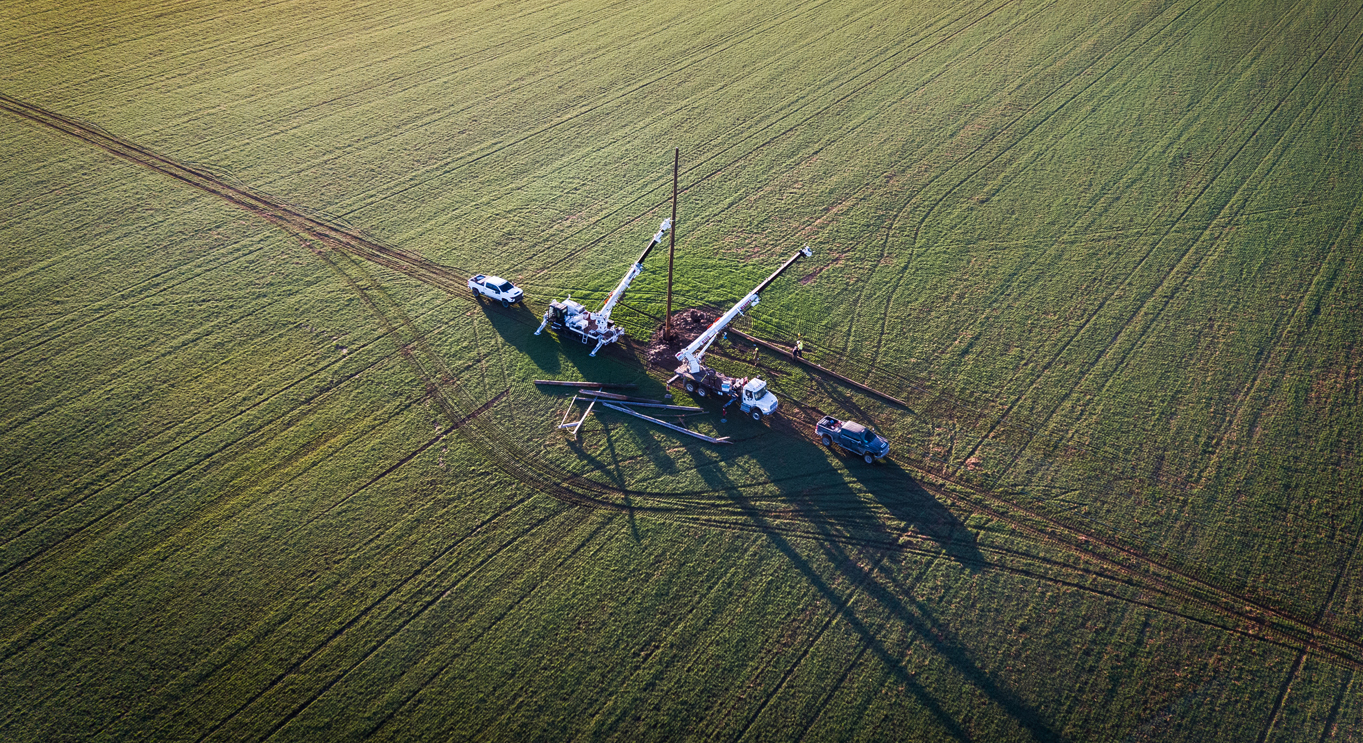 A recent unprecedented ice storm in Oklahoma not only caused widespread outages, but left one generation and transmission (G&T) cooperative scrambling to expedite repairs and reconstruction along a 19-mile stretch of downed high voltage transmission lines. To say the least, this stretch of damage created unique challenges, as a project of this size would normally take 60 to 90 days.

However, Western Farmers Electric Cooperative (WFEC), with the help of several contractors, completed this challenging task in about 30 days. WFEC is the power supplier for 21 rural electric distribution cooperatives, including 17 in Oklahoma and four in New Mexico.

Sammy Stubbs, a transmission services supervisor at WFEC, noted that this uncommon 19-mile stretch of damage was the longest he has seen in his 26-year career at the G&T, headquartered in Anadarko, Oklahoma. He recalled a 10-mile stretch from a late ‘90s ice storm, but said typically there may be multiple structures downed along a line, or maybe even a stretch of a mile or two, but rarely to this extent.

However, the recent storm had periods of heavy freezing rain that left well over an inch of ice to coat the power lines in portions of WFEC’s service territory. In some areas, close to 4 inches was reported on lines. The weight of the 138-kilovolt (kV) transmission power lines, sagging due to excessive ice, and galloping from the winds, soon became too much. The result—a downward cascade that leveled over 130 large H-structures, near Tuttle, Oklahoma.

With the beginning of a “domino effect,” the overall weight rises with each additional falling structure, continuing until reaching a structure that is strong enough to withstand the impact, thus ending the downward trend. In this situation, a switch pole (a large steel structure that carries the line to provide service for a substation), was also downed in the storm, near the center of the damaged area. From this downed steel structure, the tumbling continued for 11 miles in one direction and 8 miles in the other, resulting in no service being available to serve the Tuttle substation.

“Their efforts, plus those of other WFEC employees who were involved with various tasks associated with a project of this size, are to be commended.”

The situation prompted a need to utilize contract crews to speed up repair efforts in this area that is served by Oklahoma Electric Cooperative, a member distribution cooperative of WFEC. While repairs were being made, distributed generation units were put in place at the Tuttle substation to energize that site while work continued. Plus, line and substation crews from WFEC were busy making repairs and reconstructing over 30 additional downed or damaged structures across seven counties, also resulting from the ice storm.

To help emphasize the magnitude of the Tuttle project, each H-frame consists of two, 60- to 80-foot wooden poles, each weighing about 3,500 pounds. Crossarms are also added to these poles. The aluminum conductor, with a steel core, that travels along these structures is over an inch in diameter, and weighs roughly one pound per foot of line. Between each structure is a span of 600 to 800 feet, which can add up to some 800 pounds for each line within the span.

When taking the above weight of each complete structure, plus conductor, and combining the extreme heaviness of several inches of ice, the results were both devastating and costly.

On an average day, a six-man crew can set two 138-kV H-structures, with an estimated three hours to prepare and frame each structure. It then takes time to set each pole in the ground, with trips back and forth between structures to complete various tasks.

“These guys do an amazing job handling outages and are constantly figuring out ways to make repairs quicker in order to restore service,” Stubbs said. “They work hard and continually gain new experience with each storm-related outage that will help with future situations.”

This project included lots of man hours, with crews typically working 14 to 16 hour days. Some 55 contractors, from three companies, completed most of the project, but were joined by 23 WFEC linemen in the final two weeks, after they finished repairs in other portions of the service territory. Construction and repairs were completed and this line was energized on Dec. 1, just over a month after the devastating ice storm left its mark.

“Their efforts, plus those of other WFEC employees who were involved with various tasks associated with a project of this size, are to be commended,” Roulet said.