Only two years ago, Dr. James Graham hoped for a miracle.

Fairfax Community Hospital, where he has served as a physician for roughly 42 years, faced the threat of closure. With the nearest hospital more than 30 miles away, employees worried about what would happen to the people they served in rural Oklahoma.

Fairfax Community, like countless rural hospitals across America, had gone through years of financial struggles, which came to a head in 2019 when the hospital’s outside ownership group entered bankruptcy.

The hospital, served by Indian Electric Cooperative, was only able to remain open because of dedicated employees working for no pay. But things continued to decline.

At its worst point, the hospital was forced to become a shell. Remaining hospital inpatients were transferred out, most employees were laid off, and the hospital had to close except for the emergency room. The future of the hospital never seemed so bleak.

Fortunately, Graham’s miracle was about to come to pass.

Enter March 2020. The nation’s first COVID-19 death had been reported the month before, cases continued to swell in the following weeks, and what began as a distant threat was now threatening our friends, families and neighbors.

Dr. Elizabeth Pusey, a physician from California with over 30 years of experience and a passion for rural health care, recognized the need to keep rural hospitals open as the deadly pandemic began to spread nationwide.

Pusey founded Rural Wellness Fairfax, Inc., a health care investment company, and invested $2.1 million to purchase Fairfax Community Hospital, essentially saving the hospital, along with a significant number of jobs in the small town. Through a legal battle, Pusey also recovered $2.4 million in CARES Act dollars that had been erroneously sent to the bankruptcy trustee.

“Since then, she has helped the hospital a great deal financially with infrastructure and new equipment,” Graham says. “We have gone from a hospital that almost closed, and we didn’t because of the graciousness of the employees and people that work here for no pay, to a hospital that is getting ready to start a $2.3 million expansion—all in about one year.”

“It was like turning the lights back on. When we got these folks in doing the things that they’ve done, it was a miraculous thing,” he says. “I take such pride today when I pull up to the hospital and the parking lot is full. I walk inside and there’s maybe 80 or 90 employees when we only had about 15 or 20 at one time.”

The infusion of money also supported something that would help make the hospital successful amid a global pandemic: 24/7 telemedicine.

“Rural health care in America is in bad shape,” Graham says. “It is really in some need, and so this telemedicine may save a lot of those small hospitals.”

“I would say, we grew, expanded and provided more service in the past 12 months, than we had in the previous five years,” Stover says. “It was super important to maintain connectivity, access and availability to the physician-patient relationship in a way that was uncompromising of quality.”

“I hope it demonstrates to the rural communities that they are not being left behind,” Stover says. “They’ve got a partner at OSU as it relates to pursuing improved health outcomes in their communities and working alongside them in the best way we can to advance those endeavors.”

Stover says it is important to note that telemedicine is not meant to replace traditional delivery mechanisms in health care, but it’s a great way to improve access, availability and coordination for rural communities.

“It establishes connectivity to patients in a more convenient way that eliminates barriers to how they interact with their health care providers,” he says. “The more engagement we can create that way, the better we’ll all be as a state in terms of elevating the health care demographics and health care outcomes that we really need to improve. So I see telemedicine as a force multiplier.”

“There was a sense of apprehension up front because it was new, and it felt a little unnatural to be interacting with your physician via iPad, computer screen or even your phone,” Stover says. “What we’ve learned is that over time, both the physicians and patients became more comfortable in those interactions.”

It took some time for Fairfax Community Hospital staff to familiarize themselves and learn how to use the new technology, Graham says, but OSU was helpful in getting them set up. He says they are low on physicians, so they rely heavily on nurse practitioners and physician assistants.

“They have been very receptive to the telemedicine because they always have a backup,” he says. “It gives them comfort to know they can get expertise fairly quickly.”

Graham says the OSU TeleHealth Solution physician experts are very compassionate despite not being in the hospital, which makes patients feel much more comfortable.

“A lot of the time, it’s not just what providers can do for you medically, but also what they can do for you spiritually, compassionately and with care,” he says. “They bring that along with them, so we not only have good doctors but good people as well.” 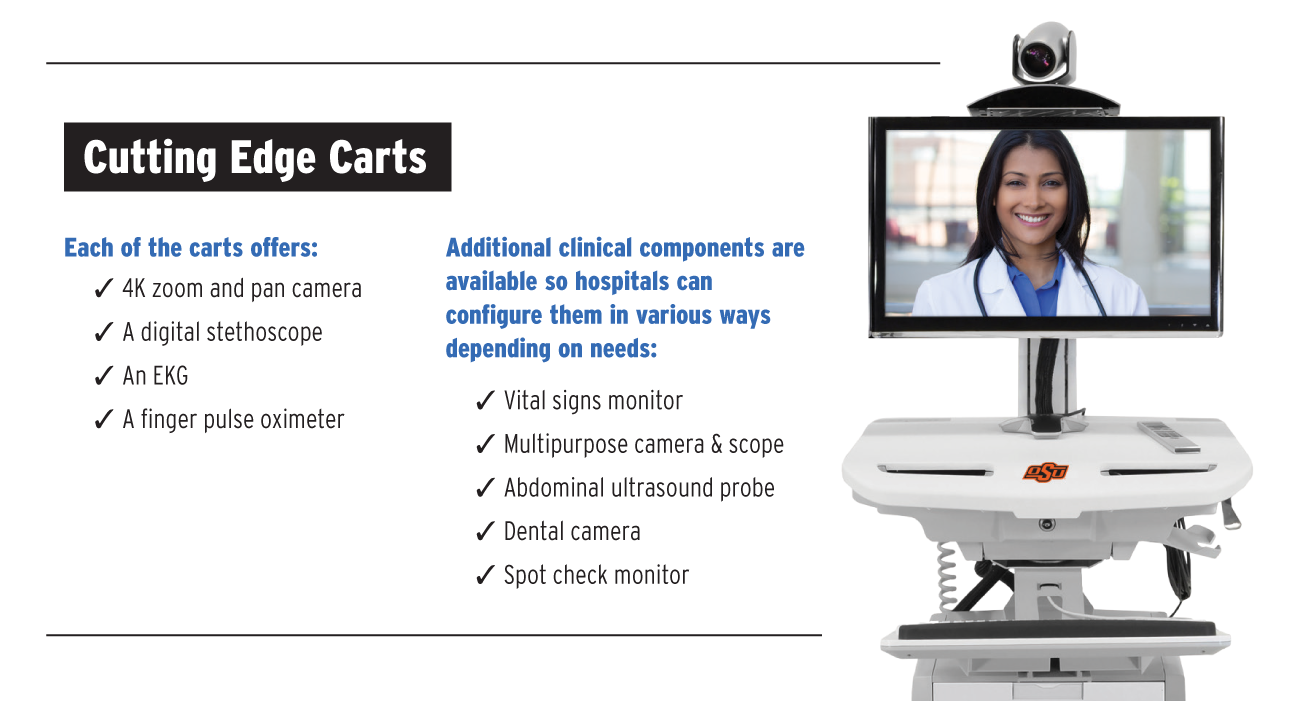 At one point, OSU Medicine had partnered with around 15 rural hospitals to integrate the new services, but Stover says that number has dwindled to roughly seven because CARES Act dollars made many of those partnerships possible.

“When CARES Act dollars allocated for this program began to be pulled back or evaporated, there were certain hospitals that just couldn’t afford to continue the service, so they had to exit the program,” Stover says. “Funding is part of the broad and wide-scale adoption of telemedicine that we are still trying to resolve and figure out.”

Graham hopes telemedicine continues to expand but hopes the burden of funding on rural hospitals can be addressed and kept low.

“We will have to keep the costs within reason because small hospitals just don’t have the kind of money we need,” he says. “That’s something to think about and work with each individual hospital based on their capabilities. For us, the use of telemedicine is wonderful, but we have to be able to afford it as well.”

OSU Medicine actively monitors a variety of federal grants that could help rural hospitals pay for the telemedicine services. However, another funding concern comes in the way of reimbursement for telemedicine. Stover says health care systems cannot invest in telemedicine without a sustainable economic model.

“There still remains some uncertainty in the reimbursement environment for telemedicine. A tremendous amount of progress has been made in the last 12 months in particular, both in the advancement of telemedicine and the way it’s reimbursed,” Stover says. “I think it will continue to improve. It will continue to stabilize how health care systems go about making an investment in telemedicine and then ensuring that investment is at least breakeven and not at a loss. I think there’s an opportunity within telemedicine to actually bring down costs if organized well.”

If it weren’t for its new acquisition, Fairfax Community Hospital might not even have had the opportunity to integrate OSU TeleHealth Solution into its operations. Fortunately, the hospital is in better shape than it has been before, offering a level of expertise they could have only dreamed of a couple of years ago.

“We’re very grateful for what’s happened to us, and telemedicine has certainly been a part of that. I don’t think telemedicine or anything else would be here today if it hadn’t been for Dr. Elizabeth Pusey and First Physicians, the management group that’s running the hospital,” Graham says. “We’re very gracious that’s what’s happened to us. We’re willing to help any other small hospitals or anybody that needs help or needs information regarding this, so feel free to contact us.”