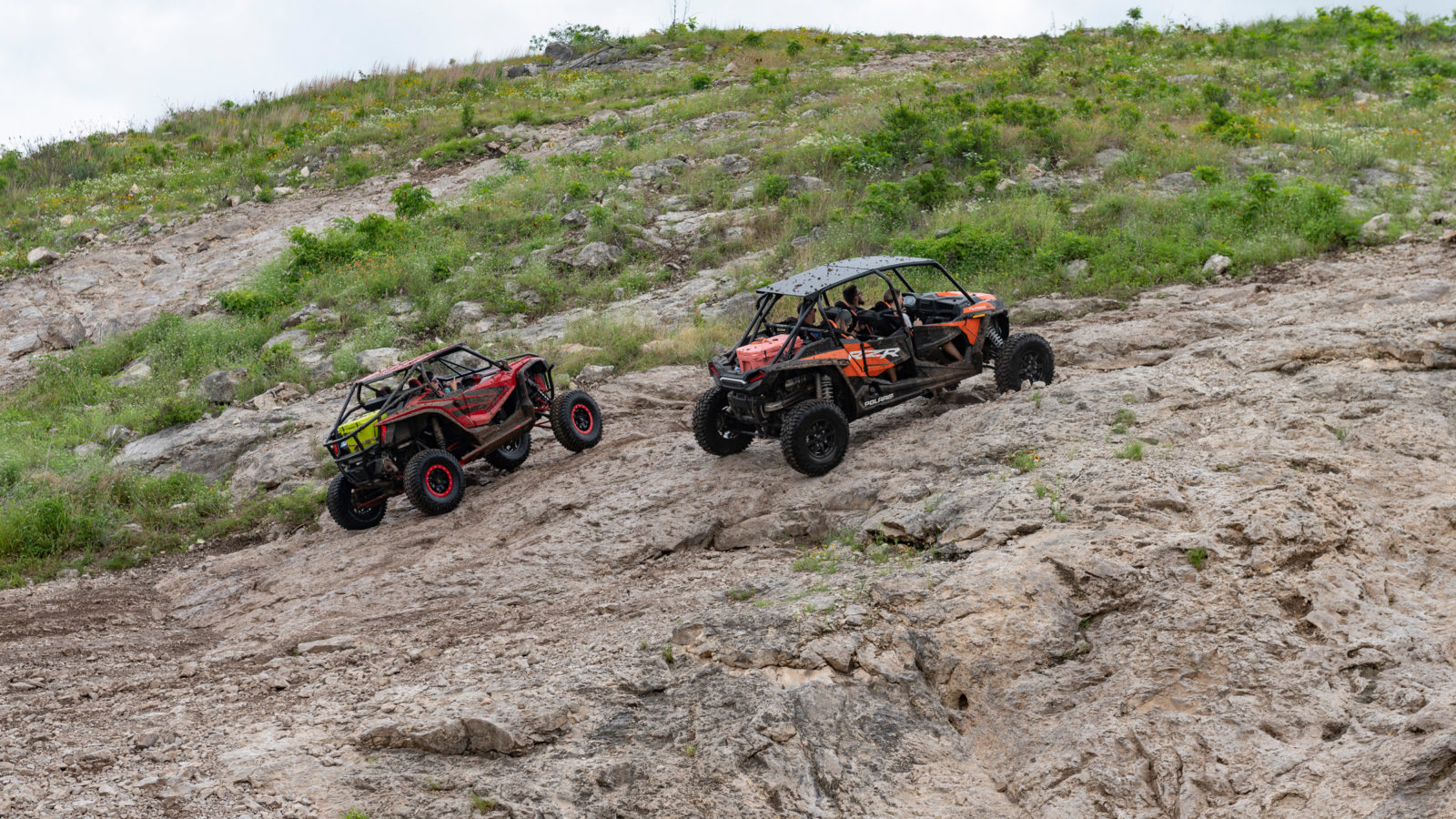 Discover the many adventures Oklahoma's unique terrain offers beyond the highway.

Public and privately owned OHV parks abound across the state, offering trails galore. But what constitutes an OHV? The term encompasses all-terrain vehicles (ATVs or “quads”), off-highway motorcycles or dirt bikes, Utility Terrain Vehicles (UTVs or side-by-side vehicles), and four-wheel-drive vehicles (such as Jeeps and trucks). In recent years, side-by-sides have become increasingly popular and now tend to dominate the sport.

Three major OHV riding areas highlight the benefits of our state’s ecodiversity: Cross Bar Offroad Park, in the Arbuckle Mountains of south-central Oklahoma near Davis; Disney Off Road Trails on Grand Lake in northeastern Oklahoma; and Little Sahara State Park, in the northwest near Waynoka.

The Arbuckle Mountains are some of the oldest mountains in the U.S., according to geologists. These rugged granite domes, their original heights now reduced to about 1,400 feet, are covered with limestone, dolomite, sandstone and shale.

Near the apex of the Arbuckles and just a few miles west of Davis is Cross Bar Offroad Park, where wheeling enthusiasts can enjoy radical features like “Rock Face,” “Dead Man’s Slide” and “Hell’s Gate” amid 6,500 acres of rocky trails and creek beds. With 150 miles of trails, Cross Bar offers recreation for all types of motorized vehicles. High clearance and four-wheel drive are recommended for the rough, often very steep trails.

Cross Bar also preserves the legacy of Gertrude Sober who, in 1909, came across zinc in the Arbuckles during one of her many prospecting trips by horseback. The discovery turned out to be a major zinc deposit and resulted in a mining boom. Her independence, unusual for females of the era, and her mining achievements, earned Sober the sobriquet “Queen of the Arbuckles.” Remnants of her mining days are evident at Cross Bar in “Gertrude’s Place,” the site of one of her mines (34.448117, -97.204233). Other vestiges of mining days—tailings, creek dams and foundations—dot the landscape as well. Look for the Goose Nest Mine at 34.467983, -97.22575 and the Ben Franklin Mine at 34.4538, -97.205283.

Now owned by the city of Davis, Cross Bar will host the 2021 ULTRA4 national championships (www.ultra4racing.com) October 16-17. Justin Ramsey, Cross Bar managing partner, says this type of racing “takes the best of rock crawling and desert racing and mixes it together.” Watch Cross Bar’s Facebook page for more developments around the event.

Park access is available seven days a week, with admission of $20 per day. Both primitive and improved (electricity and water provided) camping are available. Cross Bar Offroad Park is located at 4550 Dolese Road, Davis, (580) 247-7244.

Nestled in the forested Ozark foothills of northeastern Oklahoma, Grand Lake O’ The Cherokees is one of the state’s most popular recreational destinations. The 46,500-acre reservoir, third largest in Oklahoma, was completed in 1940 when the Pensacola Dam impounded the Grand River for production of hydroelectric power. Considered the longest multiple arch dam in the world, Pensacola’s main span is nearly a mile long.

Below the dam, near the town of Disney, lies one of the region’s premier offroading areas. Owned by the Grand River Dam Authority (GRDA), about 5 square miles of trails and diverse terrain comprise the Disney Off Road Trails, which include multiple rock formations below the main spillway and spillways to the east, and trails in the neighboring hills.

“The area has long been a popular location for outdoor exploring,” Justin Alberty, GRDA corporate spokesperson, says. “However, over the last 15 years or so, the popularity has grown through organized events such as the Big Meat Run. In recent years, GRDA has also made a commitment to support the event and promote safe outings through its patrols of the area. The communities of Disney and Langley are also very accommodating to the off-road community.”

“You can register and they do have sponsors and prizes, but for the most part it’s just the weekend when everybody wants to come,” Craighead says. “There may be 20,000 to 25,000 vehicles there from across the whole country, not just from northeastern Oklahoma. Many of the better-known professional drivers or social media influencers make appearances there, and you get to see Jeeps you ordinarily only see on social media or on YouTube.”

Craighead also praises the GRDA: “It’s impressive that GRDA allows the public free entry to the area at any hour of the day. If the water level is low enough and you can get your vehicle through, then it’s totally free access.”

The riding area is located off Oklahoma Highway 28 in Disney. Alberty noted there is sometimes a seasonal closure of one sector for bald eagles who nest there in the winter and early spring. Camping is available nearby at several state parks as well as Hogan’s Offroad Park, (918) 520-4504. More information, a trail map, and regulations are available at the GRDA website.

Offering a taste of the desert just 2 1/2 hours from Oklahoma City, the dunes of Little Sahara State Park dramatically illustrate the broad range of our state’s terrain. Located near the Cimarron River and the town of Waynoka, Little Sahara is a popular place to see “active” sand dunes, which means they are migrating and devoid of vegetation. Propelled by the prevailing southwesterly winds, these dunes continue to move northeast, prompting relocation of U.S. Highway 281 three times in the past 70 years.

Since 1960, Little Sahara, a member of Alfalfa Electric Cooperative, has been a big attraction for offroaders. With 1,650 acres of riding area and dunes reaching 75 feet in elevation, the park’s popularity continues to grow.

“It blows my mind,” says park manager Greg Grimsley, “that in Oklahoma there’s this desert. You can stand in the middle of it and look all the way around you and it’s just dunes.” And, notes Grimsley, side-by-side vehicles have become dominant among users over the past five years.

“I’ve been here 15 years and, when I first started, dirt bikes and four-wheelers were popular. The old sand rails, (lightweight vehicles built specifically for sandy terrain and often built by the users themselves) were toward the end of their existence. Over the past four to five years, side-by-sides have taken over. We still have four-wheelers but more and more, everyone has a side-by-side. The popularity has a lot to do with the safety of the vehicles, such as a four-seater with a roll-cage structure. And, if you’re new to the sport, it’s a whole lot nicer to ride with a friend,” Grimsley says.

Little Sahara State Park is growing to accommodate more campers, and plans call for a new restaurant on the property. For the convenience of campers, a trail leads from the park to Waynoka so visitors can drive their offroad vehicles to town to access services.

Riding is available 24-hours-a-day at Little Sahara. “For a lot of experienced riders,” Grimsley says, “if it’s too hot to hang out in your campsite, you can ride in the evening, and all night if you want.”

Admission is $10 a day for all riders and passengers. The park has 300 campsites, both primitive and improved. Aspiring users who don’t own an offroad vehicle can rent one in Waynoka. For more information on rentals, call the park office at (580) 824-1471. For general information, visit Little Sahara’s page under state parks at the Travel Oklahoma website.

Oklahoma offers an abundance of offroad parks. Here are a few more:

Don’t forget the helmet! State law requires individuals under 18 to wear a DOT-approved helmet. And, on public land, riding double is prohibited unless the vehicle is designed by the manufacturer to carry passengers. #SafetyFirst