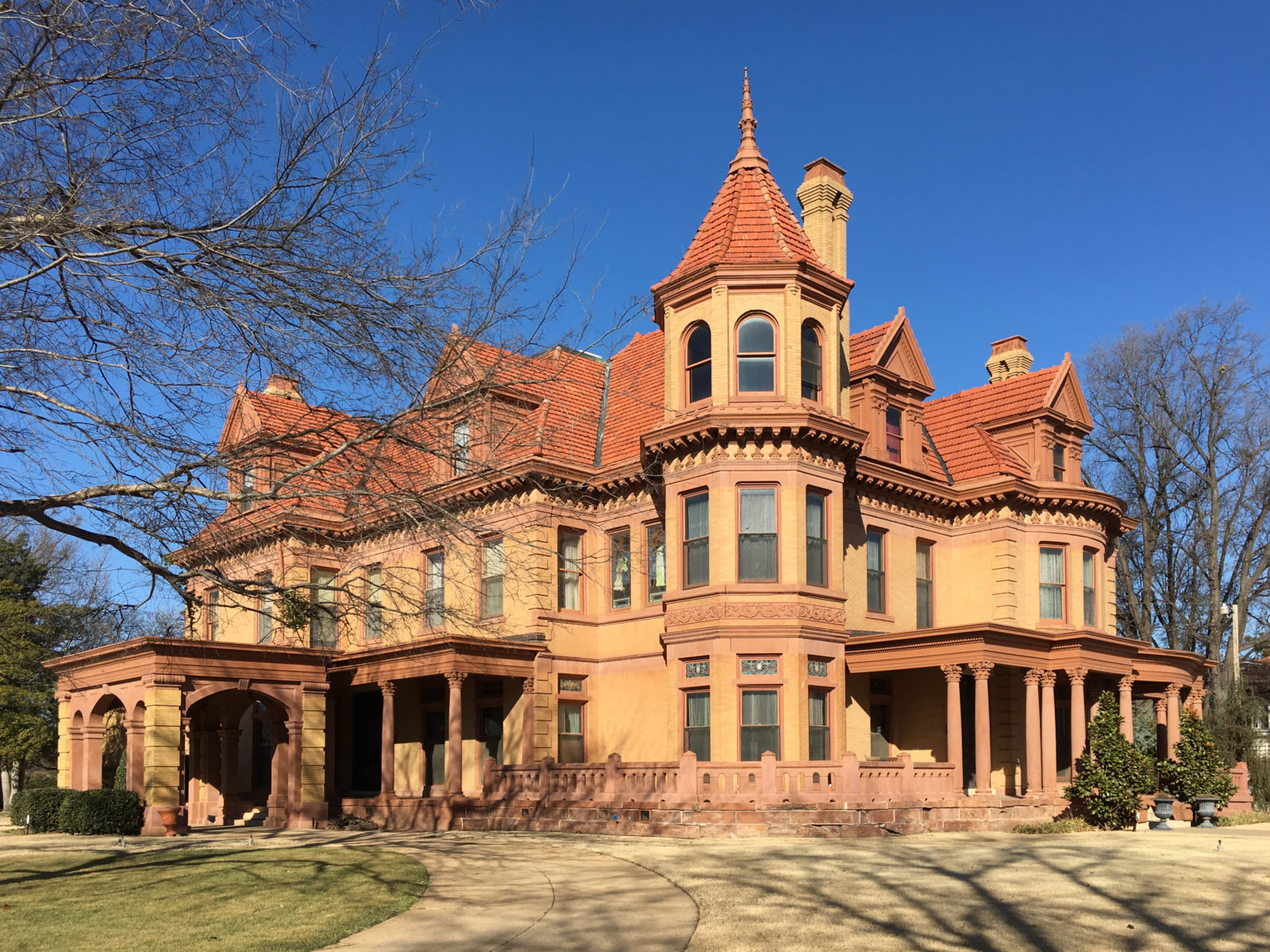 Oklahoma has a number of homes that are anything but humble. A visit to these grand houses gives glimpses into the history of the state and some of it

“Be it ever so humble, there’s no place like home”

The original owner of the 1845 Murrell Mansion was Virginian George Murrell. Married to Minerva Ross, niece of John Ross, principal chief of the Cherokees, he chose to move to Oklahoma with her family during the Indian removals.

The Murrells built a Greek Revival-style manor in Park Hill, when it was Indian Territory. The home was a center of social life in the community. Historical Interpreter Jennifer Frazee, a Lake Region Electric Cooperative member, says, “Not only is the mansion the only antebellum plantation home in the state; it illustrates the sophisticated culture of the Cherokees at the time.”

Two-thirds of the furnishings are original and 90 percent belonged to family members. www.okhistory.org/sites/georgemurrell.php

A. J. Seay built the three-story, turreted, Victorian shingle-style home in 1892 when he anticipated his appointment as Oklahoma territorial governor. He hoped that Kingfisher would become the territorial capital.

Today, while the furniture in the gentleman’s parlor is original, most of the other furnishings are pieces appropriate to the period. The woodwork is an outstanding feature of the home with elaborately carved oak lintels and molding in the central hall, maple woodwork in the formal parlor and family parlor, and cherry in the governor’s office.

Gov. Seay lived in the house until 1901. His dream of a Kingfisher capital never came to fruition. www.okhistory.org/sites/seaymansion.php

Although he spent much time traveling with Wild West Shows, Pawnee Bill (Gordon William Lillie) and his wife built their 1910 home atop Blue Hawk Peak in Oklahoma.

The Lillies loved entertaining and their dining room table could accommodate 25 to 30 guests. The silver is from Tiffany & Co.; the floor and the woodwork are oak and Philippine mahogany.

Historical Interpreter Anna Davis describes another feature of the dining room, “A Belgian silk tapestry the Lillies bought in Europe covers all four walls. The tapestry, as well as most of the other items in the mansion, is original to the Lillie family’s collection dating from before 1910 to Pawnee Bill’s death in 1942.”

The house had both electricity and plumbing. There are many western touches in the house including authentic Navajo rugs and western art. www.okhistory.org/sites/pawneebill.php

Henry Overholser, already a wealthy man, arrived in Oklahoma City just days after the Land Run of 1889. He had arranged for train cars of lumber and building materials with which he began building a legacy in the new town.

In 1903, he and his bride, Anna Ione, moved into the mansion he built on the prairie northwest of Oklahoma City. From here, they reigned over Oklahoma City’s developing social scene.

The massive Oklahoma sandstone and brick, French chateau-esque style home retains so much of its early-1900s appearance that, should the Overholsers walk back in today, they would notice little difference.

In addition to exquisite furniture, crystal and Murano glass chandeliers, china and silver, the house contains many more personal items. Guests need to take time to examine displays in the Carriage House and on the third floor. Among the treasures there—a lacy handkerchief that was part of Queen Victoria’s trousseau. www.overholsermansion.org

As did many speculators, Frank Phillips came to the Bartlesville area after the first commercial oil well was drilled in Oklahoma. Phillips struck it rich and built a 26-room, Neo-Classical mansion at the corner of 11th and Cherokee.

The 1909 mansion features such elegant touches as Waterford chandeliers, Philippine mahogany woodwork, marble bathrooms—one with gold taps—and silk damask wall coverings in the living and dining rooms. The home remained in the family until the 1970s when it was given to the state.

Visitors check in at the Interpretive Center, formerly the six-car garage. Exhibits here provide information about the Phillips family, their community activism and the oil business. www.frankphillipshome.org

E.W. Marland’s 55-room estate was inspired by a visit to the Davanzati Palace in Florence, Italy. Completed in 1926, the house featured 10 bedrooms, seven fireplaces, 13 baths and three kitchens. Panels in the dining room are made of rare oak from a royal forest. Décor includes tapestries, paintings and other works of art. The ballroom ceiling is trimmed with gold leaf and lighted with Waterford chandeliers.

The story of E.W. Marland is dramatic with both personal and business highs and lows. The mansion’s Executive Director David Keathly is a fount of information about the house and family. He explains what happened after the Marlands left the mansion.

“The furnishings were sold in a series of estate sales,” he says. “Area families and people from Oklahoma City, Tulsa and Wichita bought most of the items. Ninety percent of the furnishings have been returned.”

Visitors can see the house as it was at the height of its glory. And of all of Oklahoma’s mansions, this is the most glorious. www.marlandmansion.com

Be sure and check the websites listed for days and hours of operation for each of these destinations. Calling ahead for tours is suggested.

Category: Oklahoma Stories
Back to all stories
The Overholser Mansion. Photo by Elaine Warner