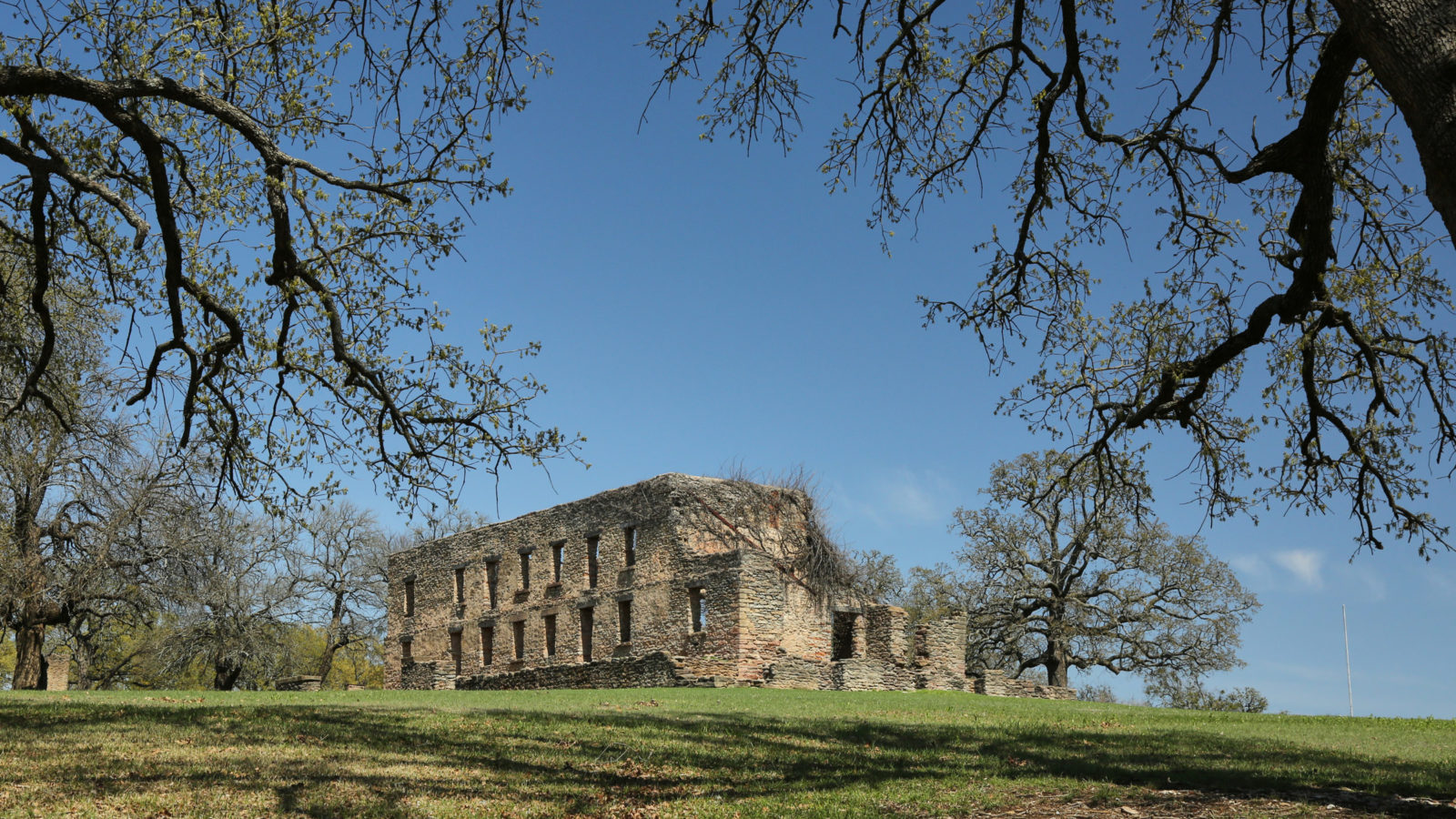 The story of Oklahoma’s early military forts highlights the pivotal role played by the region that became our state during America’s westward expansion. The sites of three pre-Civil War Army posts are preserved today as historical sites welcoming the public, and they provide a fascinating glimpse into Oklahoma’s rich history.

It all began nearly 200 years ago in a dense canebrake on the Grand River near its confluence with the Verdigris and the Arkansas, a place known as the Three Forks. In April 1824, Col. Matthew Arbuckle, for whom the mountains were later named, arrived from Fort Smith with five companies of the U.S. Army’s Seventh Infantry to establish the first military post within the boundaries of what would become Oklahoma.

Known first as Cantonment Gibson, the post later gained the status of a fort and, with its establishment, the southwestern frontier of the United States was advanced another 90 miles by the meanders of the Arkansas River. Only seven circuits of the sun before, Fort Smith had been established on a high bluff known as “Belle Point,” overlooking the confluence of the Arkansas and Poteau Rivers. Its reason for being was to quell tensions between the Osage people, who had long claimed the region around the lower Arkansas River, and the Western Cherokees, who had begun migrating to the area from the east. But after a peace treaty signed in 1822 between the Osages and the Cherokees, the garrison at Fort Smith had little to do. The line of settlement was moving west and the Seventh Infantry was considered more useful at the strategic location of Three Forks (near present-day Muskogee), an early and important fur trading post.

“When Fort Gibson was established in 1824, it was the westernmost fort in American territory. This frontier post was considered pivotal in keeping peace among the native nations being removed from the Southeast and the tribes of the Southern Plains. At times Fort Gibson garrisoned more soldiers than all the other frontier forts combined,” says Jonita Mullins, author and historian from the Muskogee area.

Thus Fort Gibson’s illustrious history began, although it had a distinctly dark side as well. The original fort was built on river bottom land, an “unhealthful” location which led to illness and death from malaria, a disease endemic at the time. In fact, the number of deaths was so great that Cantonment Gibson was called “the charnel house of the Army.” It would not be until the 1880s that mosquitoes were recognized as the source of malaria. In mid-century, physicians believed it came from a noxious gas, seeming to favor low-lying areas.

Log houses and a stockade with block-houses comprised the fortress, which was surrounded by a hospital, stables, a saw mill and sutlers’ (civilian storekeepers) stores. During the 1830s and ’40s, Fort Gibson was an important stopping point for Creeks, Cherokees and Seminoles as they traveled to their newly assigned lands in Indian Territory. The post also served as a staging area for military expeditions sent to explore the West and to seek peace between the Plains Indians and the new arrivals. Author Washington Irving accompanied one of these expeditions in 1832, famously writing of his adventures in the popular book, “A Tour on the Prairies.”

“Fort Gibson played an important role in the settlement and development of Indian Territory,” Mullins says. “It served as the base of operation for many expeditions to the western tribes and some of America’s best-known frontier soldiers served there.”

Abandoned by the Army in 1857, Fort Gibson was turned over to the Cherokee Nation, but saw new life during the Civil War, when it served as the Union’s key post in Indian Territory. After the 1890s, the fort’s structures fell into ruin, but today the site, owned by the Oklahoma Historical Society, boasts a reconstruction of the early log fort as well as original buildings from the fort’s later years. The post hospital, built in 1871, is currently being rehabilitated. The Fort Gibson Historic Site is located on the northwestern edge of the town of Fort Gibson, Oklahoma.

Soon after Fort Gibson’s start, the Army established another post about 120 miles to the south in the Red River country. There, near the Kiamichi River’s confluence with the Red, Cantonment Towson would serve to safeguard the Mexican frontier (the border with present-day Texas) and provide a center for negotiations with Plains Indians.

Early on, Towson troops were beset with difficulties, as white settlers encroached on land reserved for the Indians and illegally produced and sold liquor. In a few years, the post was declared useless and was vacated by the Army in 1829. As soon as it was evacuated, it was destroyed by settlers who burned it to the ground.

But the tide turned the following year. The Treaty of Dancing Rabbit Creek between the federal government and the Choctaws prompted the Choctaws’ removal from their homelands to the southern part of Indian Territory. Towson was re-opened to facilitate the Choctaws’ migration and was briefly known as Cantonment Phoenix, because it was reconstructed on the burned site of the old post. By 1832, the federal government began to send supplies for the arriving Choctaws to what was known by that time as “Fort” Towson.

“One of the things many visitors to Fort Towson are interested in is that this was the ending point for the Trail of Tears for the Choctaws,” says John Davis, southeast regional director for the Oklahoma Historical Society. “In that early period, the Choctaws also developed nearby Doaksville, which became the Choctaw capital and is our sister historical site.”

Besides rebuilding the post, the troops at Fort Towson were occupied with building roads intended to improve the military’s communications and supply systems on the frontier. Their supply system was soon augmented by steamboat traffic when, between 1833 and 1848, Capt. Henry M. Shreve cleared a huge blockage of debris on the Red River known as the “Great Raft.” Thus, steamboats were enabled to reach Fort Towson’s boat landing as many as four months of the year. Between 1831 and 1846, Fort Towson was a gateway for Texas-bound settlers and luminaries such as Davy Crockett and Sam Houston. In 1844, stone buildings were completed to replace the wooden construction. Many troops passed through Fort Towson on their way to the Mexican War of 1846, but after the war the fort’s importance declined. It was abandoned by the Army in 1854 and the buildings given to the Choctaws.

The Fort Towson Historic Site is now owned and operated by the Oklahoma Historical Society. Foundations and partial walls of many of the stone buildings are visible along a walking trail through the site, along with a reconstructed sutler’s store. The Lime Kiln, on the property’s eastern edge, is particularly intriguing. The well appointed visitor center features informative historical exhibits and highlights the Steamboat Heroine, the oldest western steamboat ever excavated by archeologists and, according to Davis, “Oklahoma’s only shipwreck.” The Heroine sank in the Red River in 1838 and was rediscovered in 1999. The Fort Towson Historic Site is located just east of the town of Fort Towson, Oklahoma, and Doaksville is accessed behind the Fort Towson cemetery about a mile west of the fort.

In 1834, the Chickasaws had negotiated a treaty with the U.S. government, agreeing to move west if they were provided protection from the Plains tribes which controlled the adjoining lands. By 1838 the government’s promise of protection was unfulfilled, and the Chickasaws refused to settle on their assigned lands, insisting a fort be built near the mouth of the Washita River.

“During this time, tensions continued to grow between the Chickasaw and Choctaw, who had initially occupied the same area of the Indian Territory,” writes retired Chickasaw historian and archaeologist Towana Spivey in “Exploring the Depths of History, A Selection of Nineteenth Century Water Wells in Indian Territory.” “The Chickasaw wanted to regain their political independence and secure lands of their own. The fear of being completely absorbed under the political control of their old adversaries, the Choctaw, weighed heavily on tribal leaders.”

It was not until 1842 that the fort was founded and the Chickasaws began to settle in their designated territory. Construction of permanent buildings at Fort Washita began in 1843 and the post’s stone structures eventually included a hospital and barracks. The fort even boasted such frontier luxuries as a bar, library, newspaper and bowling alley.

According to Spivey, Fort Washita “played an important role as a military bastion and supply depot during the Mexican War and became a launching point for several major exploratory expeditions of the newly gained territory farther west into the Great Plains after the war.” And, in the 1850s, gold seekers bound for California stopped there to refresh and regroup.

Fort Washita briefly closed in 1858, but Comanche activity prompted its reopening later the same year. During the Civil War, federal troops abandoned the post and it was seized by Confederate soldiers. In 1865, the buildings were burned.

Today, the Fort Washita Historic Site, served by Southeastern Electric Cooperative and located on Highway 199, 16 miles west of Durant, is owned by the Chickasaw Nation and open to the public. Visitors can tour the tree-shaded grounds, admiring both restored structures and those in ruins, some of which retain a certain haunting grandeur. And don’t miss Government Springs, tucked away on the western edge of the grounds.