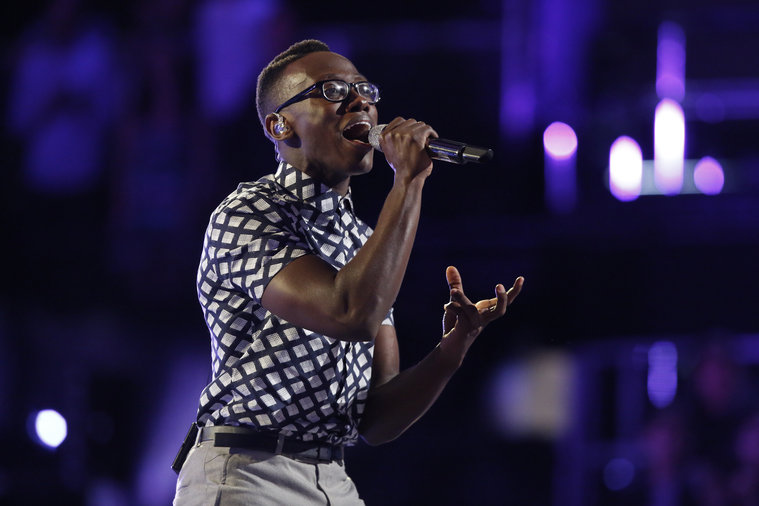 Bian Nhira was a shy 4-year-old when he first took the stage. The son of an evangelist, Nhira traveled to different churches each Sunday with his parents and three siblings.

“We were at a little church in Sand Springs, Oklahoma, one week and they put me on stage and told me to sing ‘Jesus Love Me,’” he says.

Young Nhira had no idea he would one day perform the same song on a national stage, before an audience of millions.

Nhira grew up in Tulsa, Oklahoma. He enjoyed traveling with his family, and they would often sing together as they drove to different churches across the state.

Though Nhira had always had a beautiful voice, it wasn’t until high school that he started to get serious about singing. Nhira’s father, Edwell Nhira, recalls that Nhira gave up his starting cornerback position on the Jenks High School football team in order to focus on music.

While in high school, he participated in show choir and musical theater. Nhira credits his vocal teachers, Larry Downey and Julie Hester, for helping to cultivate his gift.

After graduation, Nhira attended Oral Roberts University (ORU) in Tulsa. He used his musical talents to lead worship services at the ORU chapel.

“When I saw him on that stage, I knew that God had called him,” Edwell Nhira says.

During college, Nhira performed frequently in the Tulsa area and began to record music. By the time he graduated in the spring of 2014, he knew he wanted to pursue a career as a solo artist. He immediately hit the road, traveling and singing wherever he could. That fall he recorded his first album, which released in 2015.

During the recording process, Nhira hired his older brother Jasper Nhira, who has a master’s degree in business management, as his business director.

“In order to make this my career, I knew I had to have good business practices,” Nhira says. “Business is 90 percent of the process. It has been an integral part of my growth.”

It was shortly after the release of his album that NBC’s primetime singing competition, The Voice, approached him. They had seen videos of Nhira singing on YouTube and invited him to attend an audition in Oklahoma City, Oklahoma.

“I had auditioned once before while I was in college, but when they contacted me this time, I approached it lightheartedly and with excitement. I thought I would go and see what would happen. It couldn’t hurt,” he says.

Nhira’s Oklahoma City audition was a success. He then flew to Los Angeles, California, to meet with Voice executives who would make the final casting decisions. Soon, he received news that he would have the opportunity to sing on national television for The Voice’s Season 10 superstar coaches—Blake Shelton, Christina Aguilera, Pharrell Williams and Adam Levine.

Nhira decided to perform Williams’ song, “Happy,” for his audition piece. On March 6, 2016, with his entire family on set, Nhira took the stage.

“I was very nervous. It was a big risk, choosing to do Pharrell’s song, but I wanted to pick a song I liked that meant something,” Nhira says.

As he sang, he remembers seeing the coaches’ huge red chairs, facing the back wall of the auditorium, and wondering if they were really sitting there.

The competition’s “blind auditions” give the coaches a chance to select members for their teams based solely on the quality of their voices. It’s only after a coach pushes their button to select a contestant for their team that their backward-facing chair spins toward the stage.

The song went on, and none of the coaches pressed their buttons. He shifted his focus to entertaining the crowd and having fun.

In the last seconds of the performance, two of the coaches, Shelton and Williams, pushed their buttons to select Nhira for their teams. Nhira was relieved.

With two potential coaches, Nhira was able to choose his team. This led to some conversation between Nhira and the coaches. Williams asked Nhira about his background, and Nhira recounted his first experience singing in church at age 4. Williams invited him to sing, “Jesus Loves Me.”

His a cappella rendition of the familiar song brought Williams and the audience to their feet—and captured the hearts of millions more watching at home.

“Pharrell is the producer of today. He’s so multi-faceted. I wanted to be exposed to that wide range of talent,” Nhira says. “I’m inspired by his humility and longevity. His ability to stay grateful and not limit himself is what has carried him throughout his career.”

On the National Stage

Nhira says one of the most memorable experiences from his time on The Voice was when Williams stopped him on the set—no cameras around—and told Nhira how proud he was of him.

Nhira participated in several competition rounds of The Voice before coaches faced the difficult decision to eliminate him.

“Without a doubt, I was disappointed. I wanted to win the show. But I knew the journey would come to an end no matter what. If I won, the season would be over,” he says. “I’ve always been in this long haul and I never bank on one experience.”

Following the life-changing experience on The Voice, Nhira went back to work. He used the knowledge he had acquired, along with the platform he had been given, to his advantage. He traveled, wrote new music and recorded four new songs.

His most recent single, with accompanying music video, is called, “Would You Still Love Me?”

The inspiration for the song came as Nhira was sitting in the airport, waiting to board a flight to a friend’s wedding. He noticed an elderly couple—a woman in a wheelchair, being pushed by her husband. The woman, who couldn’t move on her own, had saliva dripping from her mouth. He watched as her husband wiped it from her face.

“I began to think of how at one point in their lives they stood at the altar, both full of life, but somewhere along the line, something happened,” Nhira says. “There are always good times, bad times and tragic times. The goal of the song is to inspire people to love unconditionally.”

As for the future, Nhira aspires to tour and to continue to challenge people through his music, to speak truth and to bring hope.

“I’m living life one step at a time, and following God every step of the way,” he says. “He has brought me to this point and I’m going to continue walking this out.”