Bob Peterson, foreman at Indian Electric Cooperative, is responsible for an important task at work. He starts the pot of coffee at 7 a.m.

When line crews arrive for the day to receive their assignments, freshly brewed coffee is ready, thanks to Peterson who has been at the co-op for 41 years. In four decades, Peterson has witnessed many changes including a transition from paper maps to a progression of digital technologies that make outage restoration more efficient for employees and consumer-members.

Peterson and his crew partner, Flynn McGee, a journeyman lineman who has been at the co-op 16 years, remember getting to outage calls by way of paper maps. Often, these maps became part of a bound book with most pages containing handwritten notes to help lineworkers navigate to restore power. Communication with the co-op was done in person or by radio in their work truck. Member service representatives would take outage calls and write a paper outage ticket that would then be submitted to the lineworkers. Once outages were restored, lineworkers would submit the paper outage ticket back to the co-op or call to provide an update on the ticket. Power was restored as safely and as efficiently as possible, but it took longer to complete every step.

When geographic information system (GIS) mapping became available, electric cooperatives experienced a new era in technologies, resulting in more efficient and improved service to the membership. GIS is a system that creates, manages, analyzes and maps all types of data. GIS and other digital technologies that followed, including outage management systems, were a game changer for co-ops and their members.

Efficiency at its best

Tony Gordon, operations manager at Indian Electric Cooperative, was initially hesitant to make the change from paper maps to a digital system back in 2007, but he quickly changed his mind when he noticed the benefits the new technology brought to the co-op.

“When we started, I didn’t think we would like it because we had notes all over the map. Now, I would not trade this technology for anything,” Gordon says. “Once we got the information implemented, it made the whole process more user-friendly. It has shortened outage times, improved safety and allowed layers of information to be readily available.”

GIS mapping made the way for an outage management system. GIS enabled co-op’s infrastructure and assets such as powerlines, transformers, substations, meters and more to be documented electronically and visible for co-op personnel. This web of information, which is regularly updated—oftentimes daily—allows co-op personnel to respond to outage situations in a more efficient manner because it puts more resources in real time at their fingertips.

“It has made our jobs easier. It benefits us and the members we serve,” McGee says.

GIS technician Ken Buckner at Indian Electric Cooperative says he makes daily updates to the system to document new services, new assets or any changes in the co-op’s service territory. These updates are important for data accuracy.

“What GIS has done is take the data that was available on paper and put it electronically for a more user-friendly tool that is no longer outdated when updates are made,” Buckner says.

In Oklahoma, most distribution cooperatives have an outage management system (OMS). This platform gives co-ops and their members the ability to manage outages more effectively and efficiently. An OMS system displays to the co-op its entire infrastructure and allows co-op personnel to view and/or input outage information as it is reported. An OMS system allows co-op crews to troubleshoot issues, resulting in more efficient operations by integrating with critical systems like automated metering, billing, a customer service platform, a real-time outage viewer (or outage maps) and an app that may be available to consumer-members.

“When we started, I didn’t think we would like it because we had notes all over the map. Now, I would not trade this technology for anything!” — Tony Gordon, Operations Manager at Indian Electric Cooperative

Those who work in a co-op’s dispatch room are constantly monitoring the OMS. Chance Penn, system engineer at Cotton Electric Cooperative based in Walters, Oklahoma, explains that OMS has the capability to predict outages. Once outages are reported via phone or app, the system begins predicting what the cause might be and other outages may be taking place from the same source.

“If only one person calls, the system records it as one outage, but when more members call or report through the app, the OMS begins to predict problems based on the number of reports and location,” Penn says.

The OMS system allows co-op dispatch to see where trucks are located within the cooperative service area. Once reports are received by dispatch, they will call line personnel out in the field to investigate the issue and work to restore outages.

“The lineworkers are the ‘eyes’ on the field and those in dispatch are the ‘ears,’” Penn says.

After an outage is reported, the OMS system sends an alarm to call the attention of those working in dispatch. The system displays a grid of lines, icons and colors that represent roads, co-op infrastructure, substations, line trucks, powerline type (single phase or three phase) and more. When outages are reported, dispatch and lineworkers in the field can ping a meter to check the voltage. The OMS system communicates with the automated metering software through a functionality called “multispeak,” which allows different applications to exchange information in the distribution utility industry, enabling dispatch and lineworkers to validate outages.

From maps to iPads

The efficiency achieved at the co-op office extends to the lineworkers in the field by way of iPads, which replaced the older books of maps they used to have in their trucks. For Peterson and McGee, they access a platform called App Suite, which allows them to see work orders for the day and to access any comments regarding an outage on their way to restore service.

“It puts more knowledge in our hands and helps us to troubleshoot more efficiently,” Peterson said.

The GPS system via the iPad will take lineworkers directly to the location of an outage while avoiding possible road closures or obstacles along the way. One key benefit of having this technology at their fingertips is the ability to take photos in the field and upload them to the system. The photos help document unique situations about the outage such as serial numbers of meters that need to be replaced, which will in turn be updated in the co-op’s system.

The flow of information to the system will occasionally allow lineworkers to stay ahead of schedule when working through outages. There are times they may get to an outage before the co-op’s dispatch calls them.

“They can get to outages quicker; they see what we see in dispatch, and they don’t have to keep track of pieces of paper anymore. It enhances communication,” Tracy Shipman, dispatch analyst at Indian Electric Cooperative, says.

Report the outage: call or use app

“Never assume your co-op knows about your outage. Members should call the co-op or report it via an app, if available,” Dusty Rice, office manager at Indian Electric Cooperative, says.

Reported outages are important because they will trigger the system and allow for outages to be predicted in the event of multiple outages. Members should report outages by calling their cooperative, by using an app or—in some cases—by texting the co-op if that option is available. Most co-ops in Oklahoma offer an app for their membership to use. One common app, called Smarthub, allows members to add comments that may be helpful to co-op personnel such as information about the property or any circumstances that could have contributed to the outage.

Paulo Araujo, a member of Cotton Electric Cooperative, says that the Smarthub app allows him to be better informed during outage situations and to keep track of his kilowatt-hour usage.

“I have found the SmartHub app to be very reliable. I often use it to check my usage, and at times I use it to check if Cotton is already aware of an outage in my area and if so, I can get the details of how widespread the outage is,” Araujo says. “I have also used the app as an outage preparation tool. As a storm system rolls along, I can see any outages nearby so I can expect what’s ahead.”

By reporting and displaying outages in the OMS, co-ops can use that data to update outage viewers, or outage maps, on their website. This tool is especially needed during widespread outages.

“The lineworkers are the ‘eyes’ on the field and those in dispatch are the ‘ears.’” — Chance Penn, System Engineer at Cotton Electric Cooperative

Ty Stahlman, AMI and operations maintenance supervisor at Northwestern Electric Cooperative based in Woodward, Oklahoma, says that members can sign up to receive a text message or an email once their outage is restored.

This enhanced communication process and access of information involves multiple layers of data. Several platforms make this efficiency a reality, from the member service representative entering information into the system after a call, to dispatch contacting linecrews, to lineworkers conducting work in the field, to the information that is fed back to the members and the information the member provides to the co-op.

It’s a circle of communication that empowers the co-op and the member. When Peterson arrives in the morning to make a pot of coffee for his fellow lineworkers, they will access important information made possible through these digital technologies. To learn what tools are available to you, contact your local electric cooperative. 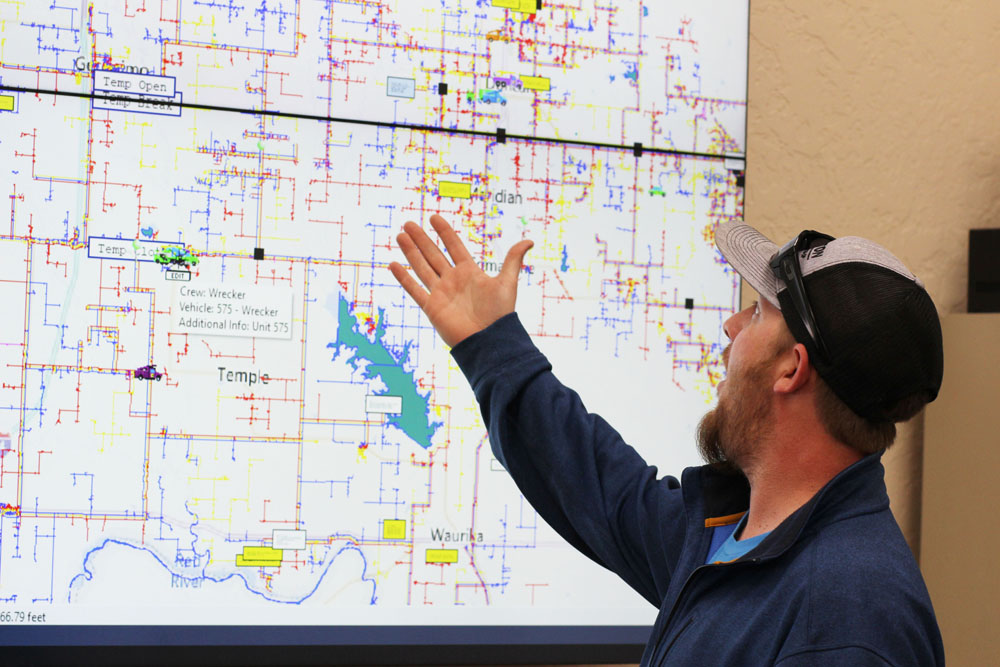 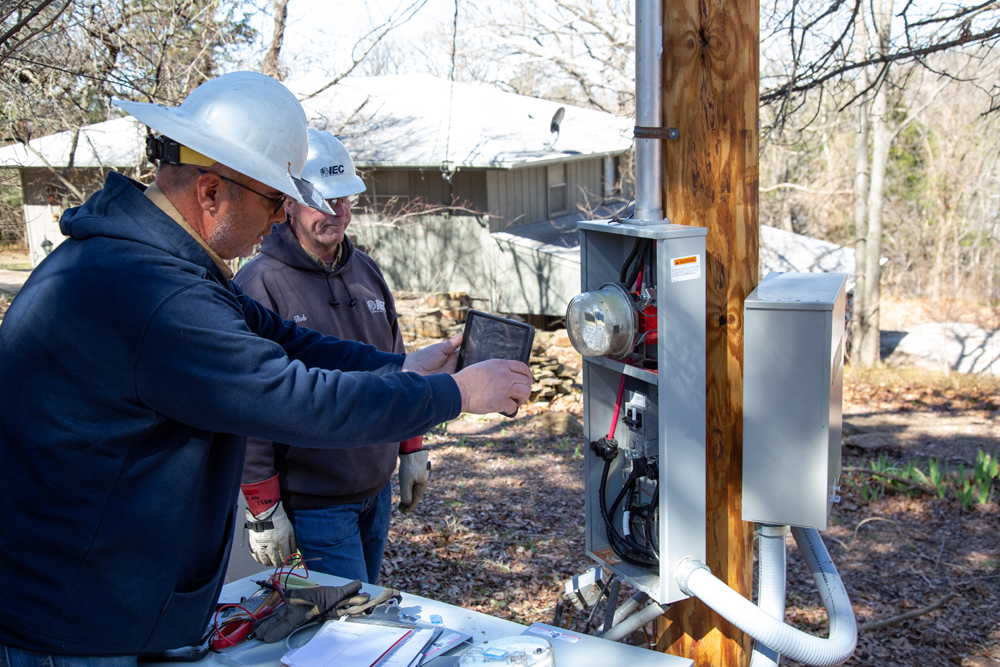 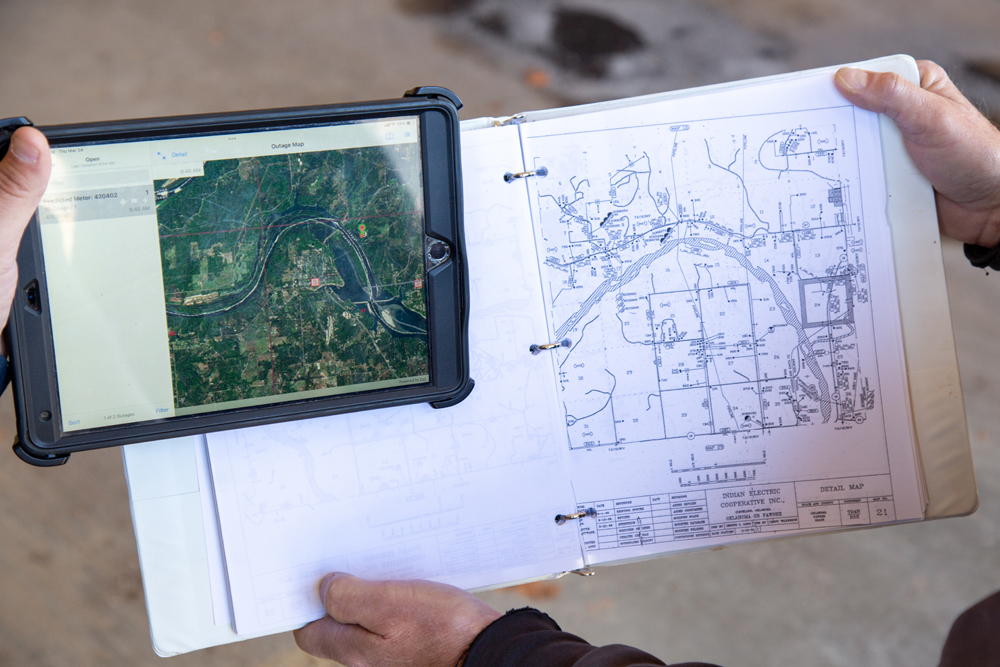 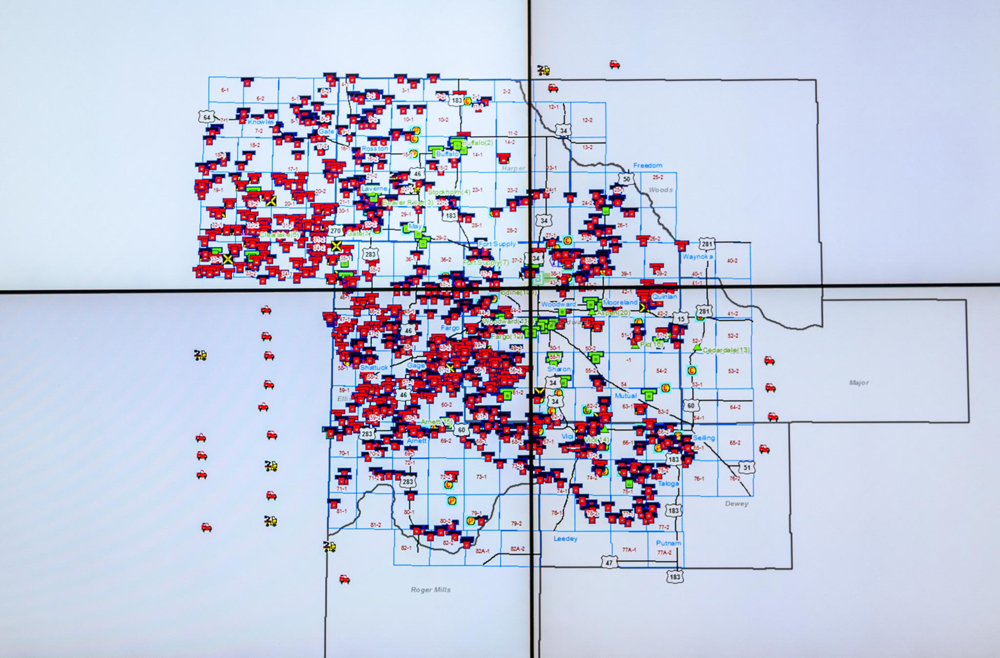