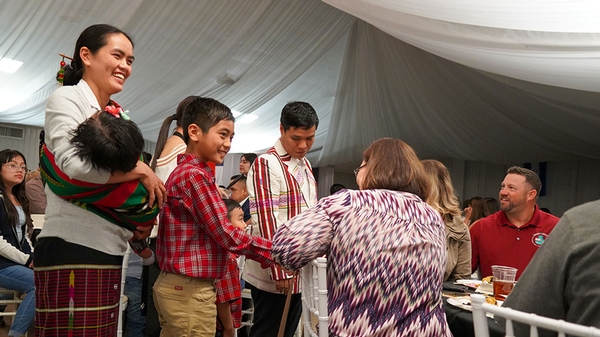 People from all over the world make Guymon their home. Nothing illustrates that more than the annual Pangaea event, which allows families from every continent to share their stories in an evening of food, fun and fellowship.

Pangaea, also spelled Pangea, was a supercontinent in early geologic time that incorporated all the landmasses on Earth. The name comes from the Greek pangaia, which means “all the Earth.” The name is appropriate for an event bringing people from all parts of the world together in this Oklahoma Panhandle community.

During Pangaea, each continent is represented through stories from participants with ties to that area. Although Antarctica has no representative, the event instead honors a member of the disability community.

Main Street Guymon Director Melyn Johnson writes an overview of each featured country along with the family’s story for a printed booklet. As part of its sponsorship, Tri-County Electric Cooperative (TCEC), a local rural electric cooperative based in Hooker, Oklahoma, handles the booklet’s production and presents it as a keepsake for those who attend.

“It is easy to find families in our community from everywhere,” Johnson says. “But it’s difficult to find people willing to stand up in front of everybody and have their story told. They have to trust me, and most of them don’t know me.”

Pangaea begins with a parade of flags from the countries represented by the families, committee members, servers and guests. Attendees enjoy a meal with dishes from each country. While the participants suggest menu items from their respective countries, local chef Virgil Gibson prepares the meal. International students from the local college or high school act as servers. An emcee reads the story of each family. After their story, the family can say a few words.

“I would say Pangaea is one of the gifts I received from Guymon,” participant Mang Lian says.

Lian is from Myanmar, also called Burma, which is on the continent of Asia.

“It is a great opportunity to know the community better and to get closer by knowing and understanding our different cultures and backgrounds,” Lian says.

David Player, a participant and emcee, moved with his family to the United States from South Africa more than 30 years ago.

“Pangaea shows us how to meet, listen, learn and make friends, especially of people that we normally wouldn’t,” Player says. “We all get comfortably settled in our social circle and, unless we have something that brings us together like Pangaea, we stay somewhat isolated in our little group.”

Seaboard Foods Guymon processing plant is the event’s presenting sponsor. Many of Seaboard’s employees are from various parts of the world.

“Pangaea is a great opportunity for the community to learn, connect and hear the stories of the diverse population that has chosen to make Guymon or Texas county their home,” Jennie Watkins, director of human resources for Seaboard Foods Guymon processing plant, says. “We feel this event not only benefits the community but also recognizes our employees.”

Additional Pangaea supporters include the City of Guymon, TCEC, Bank of the Panhandle and the Oklahoma Humanities Council. Several other businesses sponsor a continent or table and have volunteers on the planning committee.

In the past, the Pangaea event has sold out. Johnson encourages those who wish to attend to purchase tickets early. Come and be part of “all the Earth” in the Panhandle.

JuliAnn Graham, an Oklahoma Living contributor, is the communications manager for TCEC.