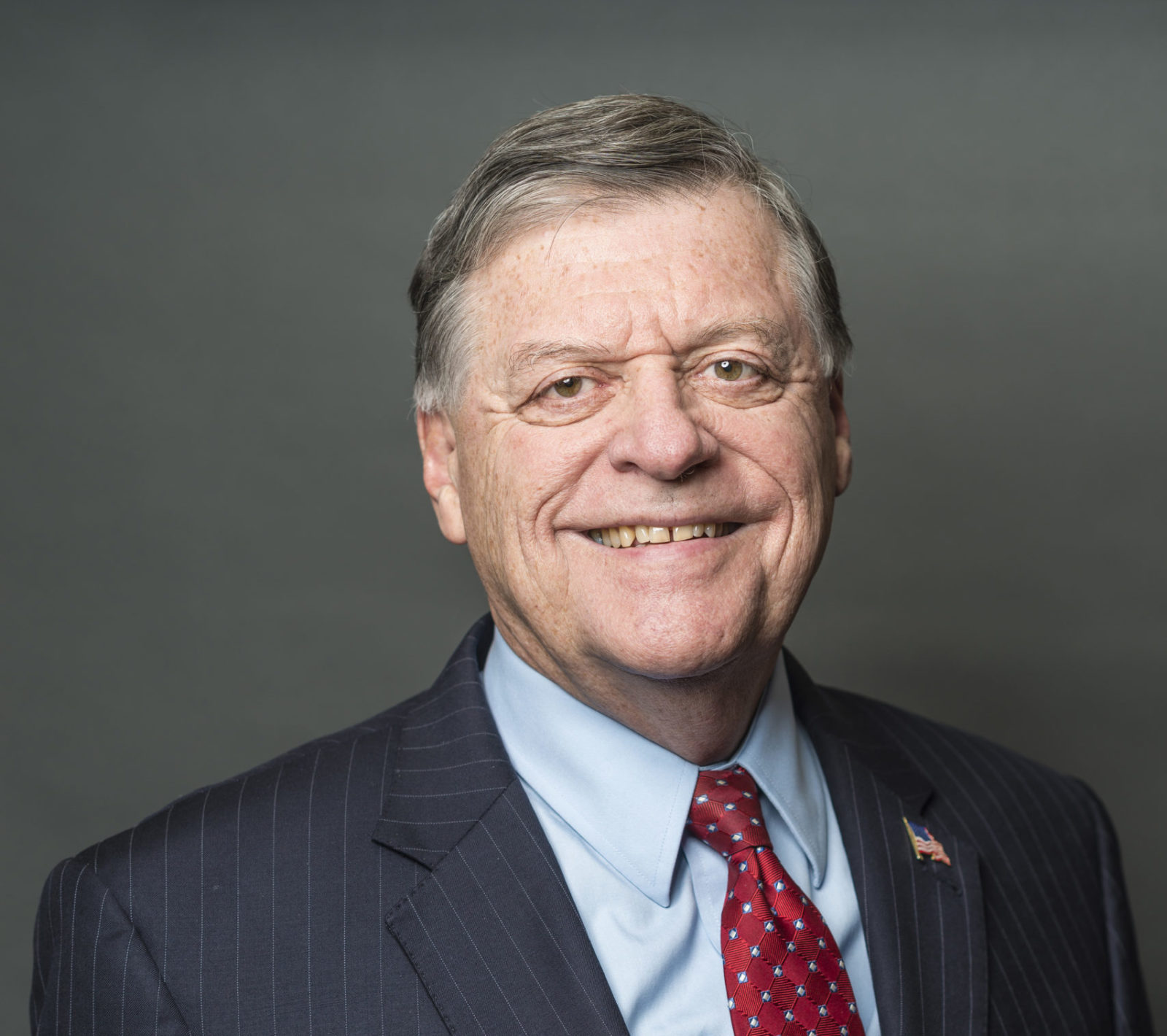 It’s a cold afternoon in Norman, Oklahoma, as U.S. Rep. Tom Cole sits in his office, returning phone calls. He wears a light blue, buttoned-up shirt with a red, checkered tie. On the lapel of his suit is a United States flag pin. His watch is an authentic Native American heirloom encrusted with turquoise accents. With a warm smile and a firm handshake, he greets the Oklahoma Living staff. The congressman’s office depicts the rich culture of his background. One wall displays framed photos of Cole with several U.S. presidents, from Gerald Ford to Ronald Reagan and George H.W. Bush—all the way to current President Donald J. Trump. Among photos of family members and politicians are Native American artifacts that represent Cole’s heritage as a member of the Chickasaw Nation. One cabinet displays a small, weathered sign that reads “Helen Cole for Senate.” This campaign sign holds a special meaning for Cole. It is a tangible memory from a successful campaign he led for his mother, Helen Cole, the first Native American woman to serve in the Oklahoma State Senate. With a genuine smile he shares, “We were very close. She was extremely influential in every decision I made.” It becomes clear that Helen Cole played a major role in the life of her son who is now a seasoned public servant entering his 16th year in the U.S. House of Representatives.

Thomas Jeffery Cole, a fifth-generation Oklahoman, was born in Shreveport, Louisiana. His father, John Dewayne Cole, served in the United States Air Force for 20 years and another two decades as a civilian at Tinker Air Force Base. Both John Dewayne and Helen Cole called Ardmore, Oklahoma, their hometown. Their ancestors moved to the Sooner State in the 1800s. On Helen’s side, her great-great-grandfather, a member of the Chickasaw Nation, moved to Oklahoma in 1851. Proud of her native heritage, Helen made her husband promise they would raise their children as Chickasaws. Helen was deeply inspired by her aunt and storyteller, Te Ata Thompson Fisher.

The couple had two sons, John Dewayne Junior, who later joined the Air Force, and Tom Cole. In the early years of his childhood, Cole moved around due to his father’s military orders. He recalls living in Illinois, New Jersey and the Panama Canal Zone where he remembers an almost “colonial lifestyle.” When Cole was in sixth grade, the family moved back to Moore, Oklahoma, where he attended Moore Public Schools. As a teenager and young adult, playing football was one of Cole’s passions. Upon graduating from Moore High School, he chose to attend Grinnell College in Iowa, a Division 3 school, with the oldest football program west of the Mississippi. In 1971, on the day of his graduation from Grinnell College, Cole married his college sweetheart Ellen (Decker). Soon after, the newlyweds moved temporarily to England; Cole had been selected as a Thomas Watson Fellow at the University of London. He later earned a Master of Arts from Yale University. On a quest to further his education, Cole started law school at the University of Oklahoma (OU), but soon realized that was not his calling. With an increased interest in history, he pursued and earned a doctorate in British History from OU. He won a Fulbright scholarship and went back to England to teach as a fellow. In his mind, his career path was set: he was actively working to become a well-versed historian. He began teaching history courses at OU and Oklahoma Baptist University, but—unexpectedly—his path took a different turn.

“I was convinced I was going to teach history for a lifetime. But life turned in a much different direction when my mom lost her first election to the Oklahoma House of Representatives in 1976,” Cole says.

A Journey in Politics

Helen Cole was passionate about politics, open government and the creation of a two-party system. Through her travels as a military wife, Helen became convinced that a more honest and open government would be achieved with a balance of power between two parties. Her resolve was so strong that she committed to joining the minority party upon her return home. And she did just that. Although she was raised a Democrat, Helen Cole became a Republican in 1960. With a desire to make a difference in Oklahoma politics, she ran her campaign for the Oklahoma House of Representatives in 1976 and narrowly lost. Cole was attending graduate school at the time. As one of Helen Cole’s closest admirers, he was not pleased with the election result.

“I reached out to my mom and told her I knew why she lost. She was running and managing her campaign at the same time. I offered to take care of her next campaign,” Cole says.

He did. And Helen Cole never lost another campaign. As it turned out, running his mother’s campaign opened a whole new world for Cole.

“I took time off from teaching to manage my mother’s campaign, and I was simply fascinated by it,” he says. “I was excited with her success. I began running more campaigns, created a good record, and others began asking me to run campaigns for them.”

His involvement in politics only deepened. The more campaigns he ran, the clearer his calling became. He found his ultimate passion in politics. Cole fondly remembers having Sunday dinners with his family and sitting down with his mother every week to discuss the latest political happenings in Oklahoma and nationwide.

“My mother was always an independent thinker; she sparked my interest in politics,” Cole says. “She had the best political judgement of any politician I have ever worked with.”

Cole was eventually invited to serve as executive director for the Oklahoma Republican Party. He established a political consulting firm, Cole, Hargrave, Snodgrass and Associates, with partners Sharon Hargrave Caldwell and Deby Snodgrass. Some of his well-accomplished clients were Frank Keating, J.C. Watts, Tom Coburn, Frank Lucas, Mary Fallin, and Wes Watkins, to name a few. Cole took his mother’s Senate seat and served from 1988 to 1991. He resigned from this post to become executive director for the National Republican Congressional Committee. He came back to Oklahoma and served as Oklahoma’s Secretary of State under then-Gov. Frank Keating. During the Keating administration, Cole was instrumental in securing federal funds to rebuild Oklahoma City following the bombing of the Alfred P. Murrah federal building. He was tapped to serve in national capacities including serving as Republican National Committee Chair and as principal political adviser for the United States Chamber of Commerce. In 2002, one of his former clients, J.C. Watts decided he would not run for re-election for the U.S. House of Representatives. Watts endorsed Cole, whose family had lived within Oklahoma’s 4th Congressional District since the 1880s. It was a fairly tight race between Cole and Democrat Darryl Roberts. But Cole pulled ahead and won. Earning the trust and respect of his constituents, he has won six elections since then.

On his journey as congressman, Cole has discovered rewards and encountered adversities. He says the greatest challenge is serving a diverse district and ensuring specific interests are represented well. One of only two registered Native Americans in Congress, Cole is currently a member of the Committee of Appropriations, Committee on Budget and Committee on Rules. The Oklahoma 4th District covers territories in 15 counties and is home to military installations, key manufacturers as well as higher education institutions. The district also includes the headquarters for the Chickasaw Nation in Ada, Oklahoma. With more than 13,000 farms, the vitality of the 4th District is critical to Oklahoma’s rural livelihood.

“I want our district to be on the cutting-edge in all we do. My vision is for people to receive a good education and stay in Oklahoma because they have good jobs. I want them to have good opportunities and raise their families here,” Cole says.

In fact, Cole’s only child, Mason Cole, lives in Moore and teaches for Moore Public Schools.

Cole is a strong believer in working to enhance the quality of life in rural Oklahoma. He believes electric cooperatives play a crucial role in the empowerment of rural communities.

“Electric co-ops are foundational institutions. People forget how transformative getting power was,” he says. “In most small communities, the main institutions are school, church and their electric co-op. I shudder to think what rural Oklahoma would be without the investment Oklahoma’s electric cooperatives have made.”

“Congressman Cole believes in and supports our mission of providng safe, affordable and reliable electricity to every consumer at the end of the line,” Meyers says. “We are grateful for his efforts and leadership to ensure we continue to empower rural communities in Oklahoma.”

Cole remembers his grandparents talking about their life without electricity.

“Transformation is not possible without power,” Cole concludes.

He also says transformation takes place when one believes in another.

Inspired by Helen Cole’s example, it’s this type of transformation that Cole strives to bring as he proudly represents Oklahoma in the U.S. House of Representatives.

Cooperative: Oklahoma Electric Cooperative
Category: Oklahoma Stories
Back to all stories
U.S. Rep. Tom Cole is a member of the Chickasaw Nation and has been serving in the U.S. House of Representatives since 2002. Photo by James Pratt