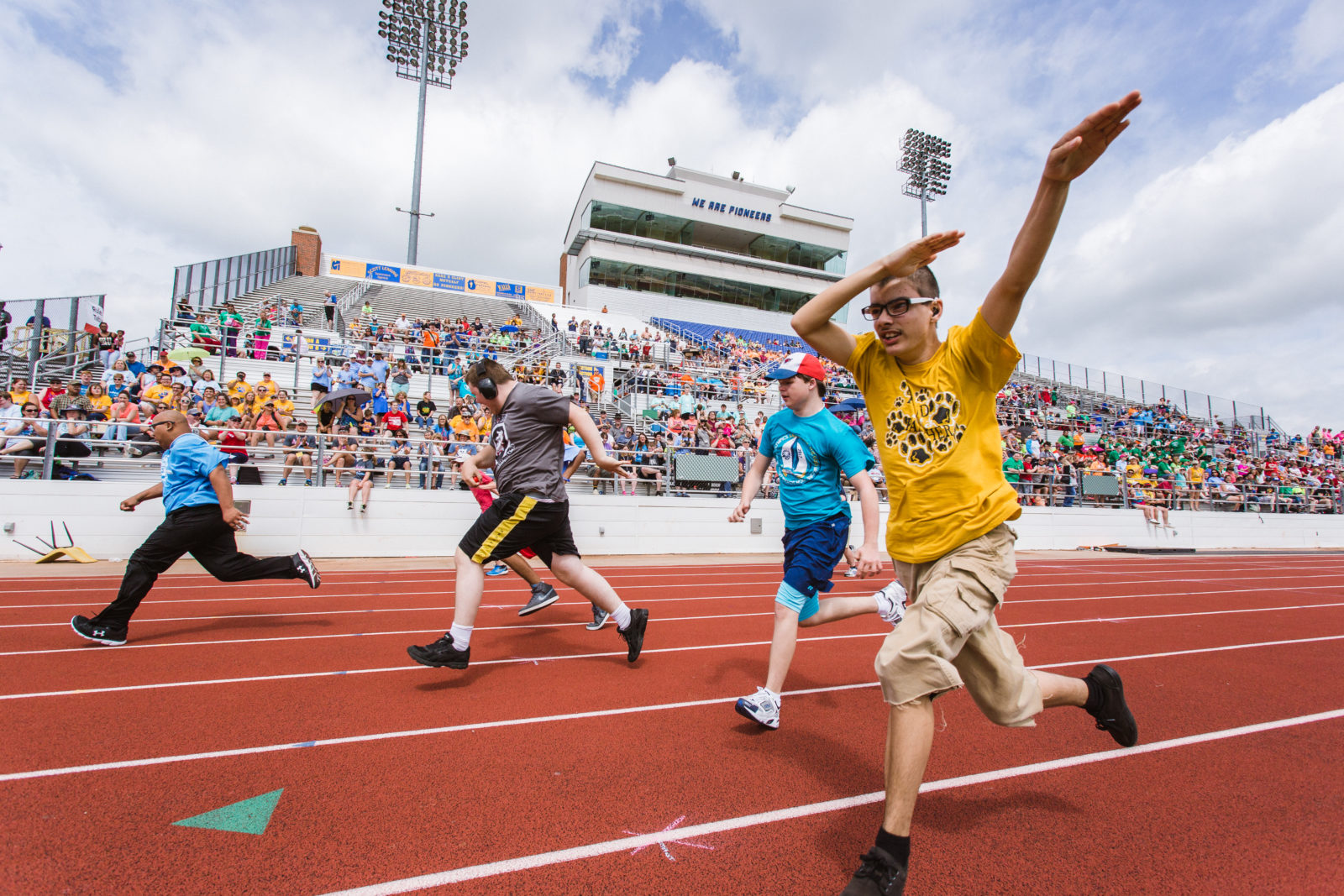 The smiles from the Howell family continued to grow as they huddled together for a picture. In front was 11-year-old Lillie who clutched each side of a plaque engraved with the words “2017 Family of the Year.”

“It’s a big honor and a big blessing to be honored here,” Lillie said.

The Howells were named the 2017 Area Family of the Year at the Special Olympics Oklahoma Summer Games. Residents of Tuttle, Oklahoma, and Oklahoma Electric Cooperative members, the Howells received the honor during the Opening Ceremonies on May 17 at Oklahoma State University’s Gallagher-Iba Arena in Stillwater, Oklahoma.

“As we told everybody in Tuttle, we’re basically a reflection of our community. They’ve been so supportive; they’ve taken us in and given us a new life completely. I told our coach that when your children are born, you have hopes and dreams for them, and when you find out there are disabilities or issues, it’s easy to give up,” Duane Howell said. “What they’ve given us is a whole new set of dreams and goals, and these kids can’t get enough; they love it; smiles all the time. We’re humbled and excited.”

Duane Howell also expressed his gratitude to Tuttle Special Olympics coaches Donna McKinney and Maya Mount. McKinney nominated the family for the award, and on her nomination form she stated Keegan and Lillie offer, “lots of support to the team, while the parents provide endless energy and enthusiasm. This family of six is such an asset to our team!”

“I think Tuttle is really supportive,” Lillie said. “They love it and I love it too.”

More than 5,000 athletes from throughout the state participated in the 48th annual Summer Games in Oklahoma from May 17 to 19. The three-day event showcased competitions in athletics (track and field), bocce, bowling, golf, horseshoes, powerlifting, Unified® 3-on-3 basketball, and Unified® softball. Motor Activities and Stars for the Future are two other events held.

Jacob and Harrison compete in bocce during the Summer Games, and this year they both won a gold medal. Athletes attend the Summer Games from 14 geographic areas of Oklahoma, but first they must complete competitions in their local areas.

The recipient of the 2017 Spirit Award was Adam Chace, a member of the Newkirk Tigers Special Olympics Team. His mom, JoAnn Chace, said her son has been participating in the games the last several years, and this was the, “first time he won something so grand. It feels great. It feels fantastic.”

This spring marked the 34th year the games were held in Stillwater, and this year’s games also brought some pirates to shore. To help celebrate the theme “Pirates: Sailing for the Gold,” a landlocked pirate band from Norman called Rum Fellows kicked up the entertainment during the opening ceremonies. The band had their mates singing and dancing to the hardiest of tunes, and when beach balls weren’t bouncing throughout the arena, free t-shirts and stuffed animals were being vaulted into the crowd.

Reggie Bixon, 31, rocked back and forth in his wheelchair while Janae Martin held his hands and danced. They were near the stage on the arena floor with plenty of space to groove. This was Bixon’s 23rd year competing. He and his foster mom Jessie Ponder are from Del City, Oklahoma. Ponder said Bixon competed in the walk for 20 years, but now he competes in the softball throw. Overall, Ponder said the dance is Bixon’s favorite.

The rock concert atmosphere had everyone in a dancing mood, and the enthusiasm multiplied when the parade of athletes began. Each group of athletes carried in a banner with their area name on it. Not everyone wore matching shirts or pirate attire in the parade, but everyone did have on a huge grin as they marched into the arena and waved to the crowd.

Sitting on the bleachers near the parade entrance was a group of Yukon High School students. They received the Unified Champion School of the Year Award. This was the first year the award was given, and it recognized their work in sports for students with and without disabilities. Yukon High School Principal Melissa Barlow said another school nominated them. Barlow and special education teacher Renee Shoaf were both excited about the award.

“It’s a real honor to be the winner of the first award,” Shoaf said. “Our kids have worked really, really hard.”

Also working hard each year are hundreds of volunteers. Throughout the three days of competition there were nearly 120 volunteers. Oklahoma’s electric cooperatives are proud supporters of event, sending the largest group of volunteers to support the games and encourage athletes.

John Gregory, from Stillwell, Oklahoma, is an Ozarks Electric Cooperative member and volunteered for the second time this year. He said he is giving back to the community and “the smiles on their faces are worth it.” His wife Noreen joined him this year and they helped people find their way around the arena.

“I’m encouraged and amazed at their determination,” Noreen said of the athletes. The Gregorys have two kids who also volunteered this year.

He said he is involved with the Special Olympics group in Tuttle, and they even invited him to prom.

“We basically get to see the kids grow up,” Watters said. “I really enjoy working with Oklahoma Special Olympics.”

Watters said he loves the kids and works the track every year.

This year, some athletes on the track had to compete against the wind. When Stacy Howeth, director of member services for Oklahoma Association of Electric Cooperatives, saw the athletes begin to race their wheelchairs into the strong wind, she started to suggest a solution, but before she could finish her sentence, the volunteers lined up alongside the track to make a wind break.

“Rain or shine we’re there at the finish line,” Howeth said. “As long as athletes want to be there, volunteers will be there.”

Howeth said a volunteer sees and feels every emotion just like the athletes do, and it’s important to let the athletes finish the race.

“They’re so excited to see you at the finish line,” she said. “It is truly life altering. It’s a lot of hard work; a long day, but it is so worth it. Most volunteers come back. It’s really hard to put into words.”

The Howell family stated, “As a family we are forever changed by the deep impact the Special Olympics has had on our lives. It has given us hope, restored our faith in humanity, and allowed us to see and share moments of pure joy for our children and so many precious others … Most of all, we have seen them reach a new level of happiness. At the end of the day, that’s what matters most. Self-love and purpose that comes from being truly happy. Special Olympics has helped pave the road for them to find that within themselves, and we will forever be grateful.”

To learn more about the Special Olympics Oklahoma, visit http://www.sook.org/.