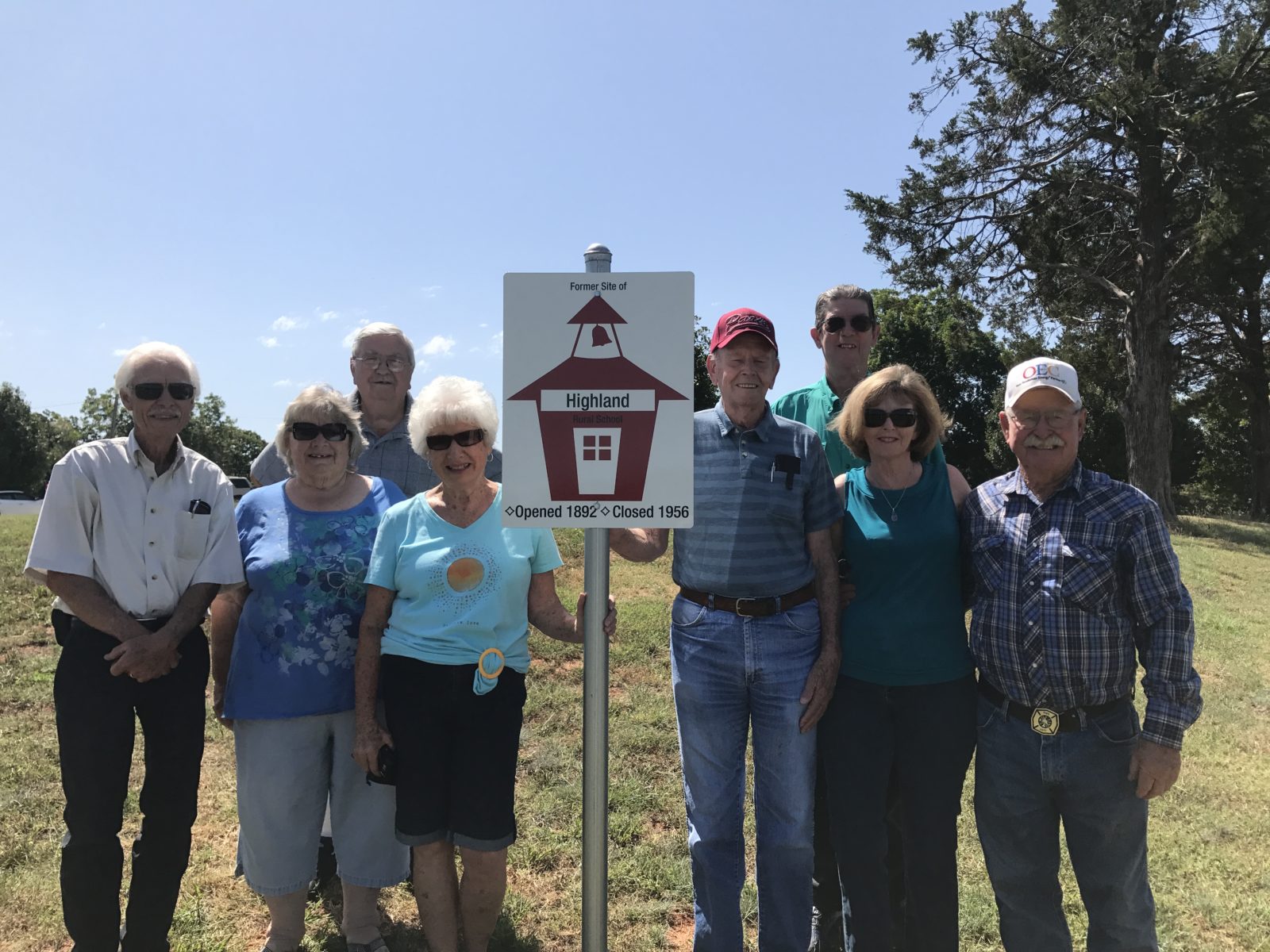 Several members of the Cleveland County Rural School Committee have taken on a labor of love. About five years ago, members hatched a plan to commemorate 70 rural schools in Cleveland County by placing a historical marker at each locale. So far, the committee has placed 26 signs.

“The best years of my life were when I went to a rural school and high school,” Joyce Carle, project manager and Oklahoma Electric Cooperative member said of Highland School, formerly located at 120th and Etowah Rd. in Noble, Oklahoma.

Carle explained that Oklahomans have gone to school since before the land rush and rural schools started dotting the countryside in the early 1890s. Because there was no transportation, schools were placed every 3 miles so children wouldn’t have to walk more than a mile-and-a-half to school. Back then, rural schools typically had one or two classrooms.

Ferreting out historical data meant Carle’s team spent countless hours at the Cleveland County Genealogical Society (CCGS) in Norman, poring over historical records. Although time consuming, digging through tomes of historical data is worth it.

“There’s a lot of history here we don’t want to lose,” Carle said. “We want to get it done while we’re still here.”

Jean McCracken, president of CCGS and Genealogical Society Library volunteer spoke up in favor of the project.

“It’s a reminder of the rural schools,” McCracken said. “It’s nice for descendants to come and find the area where their grand or great-grand or great-great-grandparents went to school. The project came none too soon. They’ve had a lot of work to do.”

Signs have been purchased for Center Point, Corn, Liberty No. 2, Meeks, Red Springs, Robinson, Schwartz, Science Hill and Stella, but placement is pending remodeling or obtaining permission from current land owners—most of whom Carle said are “tickled to death” to help with the project. When permission cannot be obtained for one reason or another or when modern terrain prohibits placing a sign at the actual rural school location, markers are placed nearby. Regardless of location, members of the committee are enthusiastic about their project.

“I’m thrilled that (fellow committee members) Lenora (McCalin), Joyce (Carle) and Norman (McCalin) came up with the idea. My dad, Jack McHughes, who is 95 years old, went to Banner and my husband went to Rocky Point. I’m glad we were able to contribute.”

McHughes said he thought the project was great and added, “We old people can remember what was where and what went on. Going to school was more like family than going to school.”

“It was your life. Everybody knew everybody really well,” Loeffelholz said.

Carle expressed gratitude to her fellow committee members who have worked diligently toward a common goal. She invited former students to call her at 405-872-5157 to provide pictures or other historical information about their rural schools. Donations are welcome.