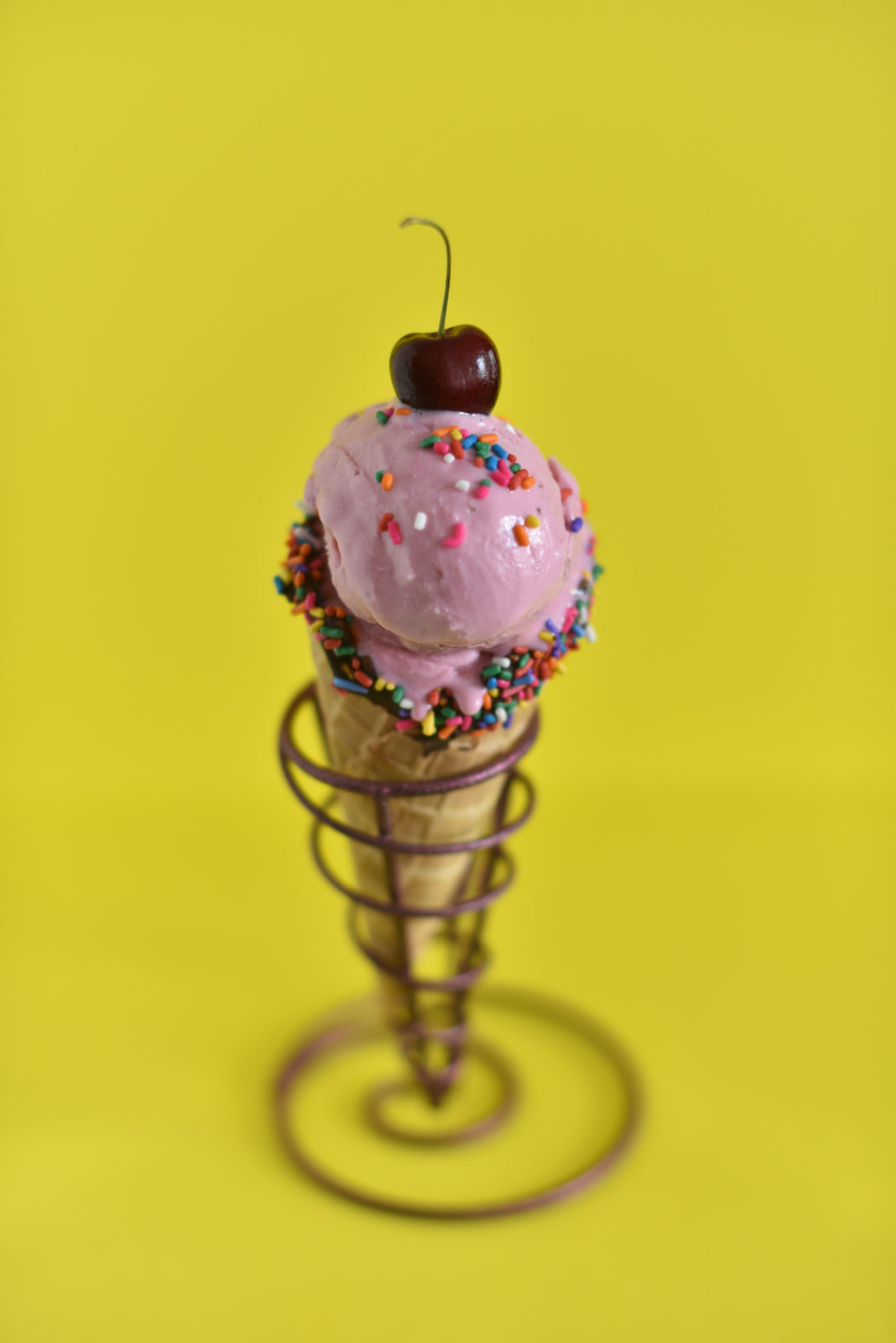 When the Oklahoma heat calls for a cool treat, ice cream may be at the top of the menu. Whether you prefer it blended in a milkshake, sandwiched between two cookies, or drizzled with fudge sauce and topped with nuts, whipped cream and a cherry, there are delicious options in every corner of the state. So on your next trip, take time to enjoy  some of Oklahoma’s sweetest stops.

The Baked Bear in Norman is a must-visit for impressive ice cream sandwiches. Customers choose from 13 flavors of craft ice cream sandwiched between a variety of baked-from-scratch cookies, brownies, and even donuts. If desired, the sweet creations can be rolled through candy, nuts and other toppings and hot pressed to warm the cookies.

“Our most popular combination is the Funfetti cookie and Bear Batter ice cream,” owner JoAnna Howard says. “The bright blue ice cream is a cake batter base with brownies and fudge mixed in. It’s delicious and very sweet.”

Howard, along with husband, James Howard and business partners Dean and Veronica Ingram, started the Baked Bear in April 2017 after visiting a Baked Bear location on vacation in California. They enjoyed the sandwiches so much, they decided to open a shop back home. And Oklahomans have been very welcoming of the new ice cream experience.

In addition to unique sandwiches, the Baked Bear sells ice cream by the scoop, in milkshakes and enjoys catering for weddings and parties.

Though there are other frozen custard options in the surrounding area, Jareds’ Frozen Custard in Bartlesville draws a summer crowd to enjoy to its ‘50s-inspired ice cream stand.

“Our custard harkens back to the childhood days of our owners Kay Jared and her brother-in-law, Roger Jared,” employee Erik Terwey says. “We have people who drive up from Tulsa to get their custard here.”

And for good reason. The made-fresh-daily, egg-based custard is smooth and rich and comes in a variety of flavors and preparations. Vanilla and chocolate custard are always on the menu and one or two additional flavors—such as mango, caramel, lemon and mint—are rotated in weekly.

The Three Berry Zinger, made with vanilla custard with strawberries, blueberries and raspberries blended in, is a customer favorite. The Turtle Sundae made with vanilla custard, topped with caramel and hot fudge sauce, roasted pecans, whipped cream and a cherry, is another popular order. Shakes, malts, smoothies, concretes and homemade waffle cones and bowls round out the Jareds’ menu.

Known as the cow chip throwing capital of the world, Beaver, is also home to the Sweet’r Side ice cream shop. Corey and Joan Broadfoot, TCEC members, started the business as a greenhouse, the Bittersweet Station. They later expanded it to include a home shop and ice cream.

“The ice cream is a little section of the store,” Joan Broadfoot says. “We do old-school stuff like sundaes, banana splits and floats.”

Though ice cream is just part of the business, their unique creations are not to be underestimated. They make homemade vanilla and chocolate waffle cones for serving their Hiland Dairy ice cream and offer a fun variety of hand-dipped shakes, like the S’more Shake, made with vanilla ice cream, mixed with hot fudge and topped with a graham cracker and marshmallow fluff. Lightening up their frozen menu, the Sweet’r Side also offers Dipsticks—chocolate-dipped frozen bananas—and fresh fruit smoothies.

“It’s a cute, creative place to stop and check out. We have a lot to look at, and we have nice patio to sit on,” she invites—just be sure to do it with ice cream in hand.

After serving in the navy and spending 32 years in the Pacific Northwest, Bob Underwood moved home to Waukomis to be close to family. Having lived in Seattle, he and his wife, Mary, opened Little Bit of Seattle 10 years ago, to offer Waukomis residents a new ice cream and coffee experience.

“We went to a coffee festival in Seattle and ran into people doing gelato. We thought ‘This could work in Oklahoma,’” Bob says. “We had an Italian guy come to show us how to do it.”

Bob makes the smooth Italian-style ice cream fresh each morning. Except for a few staples, the flavors change regularly. A couple of the popular flavors include Roasted Almond and Donatella, a Nutella-inspired gelato. They also offer a variety of non-dairy sorbettos, and they feature one flavor daily made with Truvia sweetener and goat’s milk.

“We’re located in the former Waukomis High School band room. I used to play tuba where the gelato case is now,” Bob adds.

In addition to frozen treats, they sell coffee and coffee drinks with beans roasted in Seattle, and baked goods, homemade by Mary.

A 30-foot-tall cowboy off of Highway-259 in southeast Oklahoma marks the spot for sweet treats in Hochatown.

Northside ice cream parlor features 12 varieties of hand-dipped Blue Bell ice cream, served up by the cone and in sundaes, banana splits and floats. One of the most popular offerings is the Banana Foster shake made with vanilla ice cream, fresh bananas, caramel and hint of cinnamon.

Owner and Choctaw Electric Cooperative member Tom Verace says one of the unique features of the parlor is its location.

“The ice cream parlor sits in front of an old west town with 18 holes of miniature golf,” he says. “The town has a post office from the 1800s, and the dentist’s office has a window from 1865. Each building plays a recording about the antiques inside.”

After a round of putt-putt, golfers will want to cool off inside with a refreshing treat from Northside.

There are several different types of ice cream. Here are a three:

1) Creating the ice cream base. During this step, the milk and cream is heated to dissolve the sugar, and flavorings are added. In a custard-style ice cream, the eggs are also added and cooked during this step.

3) Hardening the ice cream. The churned ice cream, now thick and creamy, is placed in a container to harden. Commercial ice creams are frozen quickly to reduce the opportunity for ice crystals to form.

“Sometimes I can’t sleep so I get up and write down ideas for new flavors,” she says.

The Java Chocolate Chunk is a favorite with adult patrons, and the kids love the Cotton Candy. Unique flavors like Candied Bacon also make their way into the rotation. Other sweet treats include ice cream sandwiches made with homemade cookies and Affogato—a shot of house-made espresso poured over a scoop of ice cream.

“It started with my travels across the country for work and experiencing different ice creams. I wanted to bring the microcreamery concept to Tulsa,” he says.

The microcreamery’s most popular ice cream flavor is its namesake—Rose Rock—loaded with all things Oklahoma: a strawberry ice cream base, inspired by the state fruit; the state nut, pecans, in candied form; a hint of the state flower, rose; and chocolate magic shell to represent Oklahoma oil.

University of Oklahoma junior Riley Eden started the Super Scoop in Edmond with a dual purpose: to bring a homemade ice cream parlor to Edmond and to provide employment opportunities for “Super Scoopers”—persons with developmental disabilities.

“Eighty to 85 percent of my employees have special needs,” Eden says.

Eden came up with the vision as he interacted with developmentally disabled friends at church and in volunteering with the Wings organization in Edmond. He then joined forces with his mom and a friend to come up with recipes for homemade ice cream. The Super Scoop opened in May 2017, and has been a success, thanks to the support of the local community.

Eden says the shop’s most popular flavor is Dr. Pepper Chocolate Chip, a hat tip to the Howdy Homemade ice cream parlor in Dallas, Texas and to football coach Gene Stallings whose son was born with Down syndrome and who has been heavily involved with improving the quality of life for those with special needs.

Other popular flavors include the Super Scoop, a cake batter-based ice cream and Cookies and Cream. All ice creams are served in a cup, and patrons can enjoy free house-made waffle cone chips on top.

Prior to opening TJ’s Homemade Ice Cream in Chandler, owner Troy Padgett spent a year and a half creating and testing ice cream recipes in his home.

“It took a lot of trial and error. I would take the ice cream to work and have everyone taste test it,” Padgett, a Canadian Valley Electric Cooperative member, says.

Since November 2016, making ice cream has become his day job.

The 200-square-foot storefront on Route 66 serves homemade ice cream, 12 flavors of milkshakes, handmade sundaes, splits, floats and ice cream cakes to locals and travelers alike. An Oklahoma-inspired creation, the Tornado, is a caramel milkshake mixed with Cocoa Krispies cereal, swirled with fudge sauce and topped with a with Rice Krispies treat, two giant marshmallows and a generous dollop of whipped cream.

Mitzi Jones of Davenport and her husband enjoy the German Chocolate Cake ice cream filled with caramel and crunchy pecans and coconut.

“We come here every date night. It’s worth the trip for sure,” Jones says.

Perhaps the most popular location for enjoying a sweet treat: home. And Oklahomans have several options for ice cream, made right in the state. Headquartered in Tuttle, on Oklahoma Electric Cooperative lines, Braum’s dairy stores scoop ice cream—and sell cartons to take home—in 128 locations across the state. In addition, Hiland Dairy manufactures ice cream in Norman and Chandler, Blue Bell has a plant in Broken Arrow, and Billy Goat Ice Cream Company produces goat’s milk ice cream in Stillwater. All three brands are available in grocery stores throughout the state.

Cooperative: Oklahoma Electric Cooperative
Category: Oklahoma Stories
Back to all stories
OKL has the scoop on 10 sweet ideas for ice cream stops. Photos by Laura Araujo