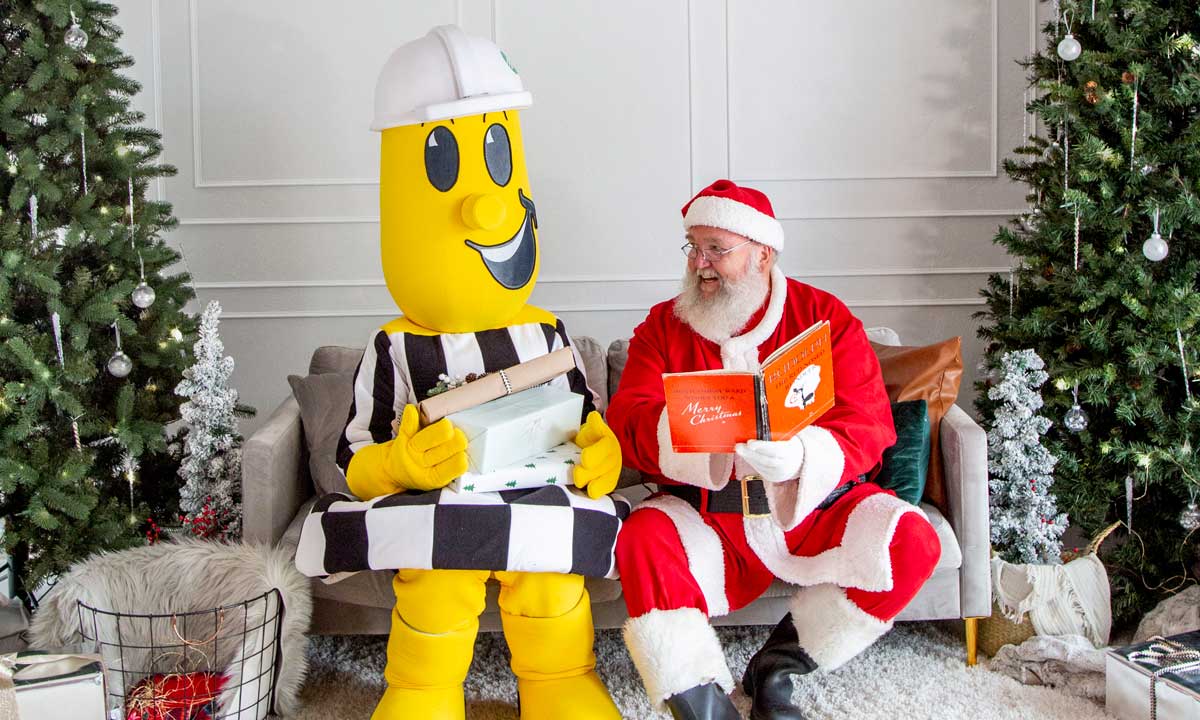 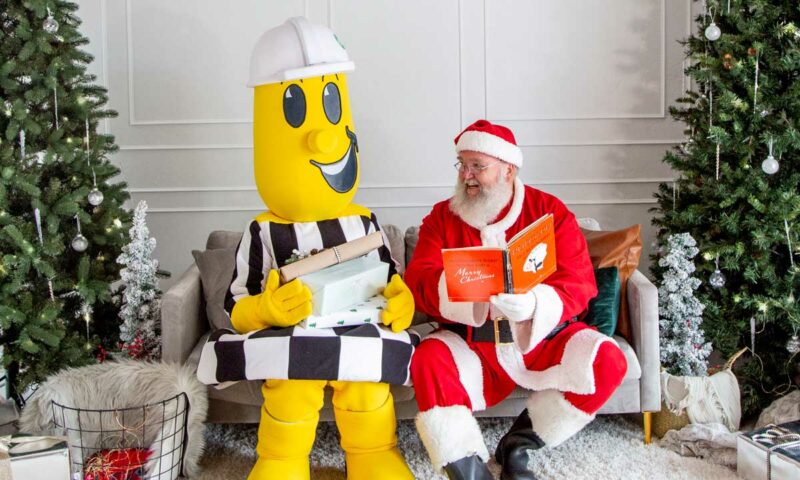 In the warm glow of Christmas lights, the stockings are hung with care. The melody of a familiar carol beckons memories of holidays past, and the scene is a picture of comfort and a sense of promise of happy memories to come.

For many Oklahomans, the holiday season can be simultaneously heartwarming and heartbreaking. While some rejoice in abundance, others are acutely aware of basic needs that may be lacking.

Rural electric cooperatives express genuine concern for community year-round and take action to help their members and the communities they serve thrive. Not only is this “Concern for Community” a guiding principle of the co-op, but it is also ingrained in employees’ hearts.

Following are examples of the giving nature of electric co-ops in Oklahoma and the work being done to make consumer-members’ holiday season bright.

In 2004, a group of Northfork Electric Cooperative (NFEC) employees, based in Sayre, Oklahoma, were sharing different member needs they were aware of within their service territory. The seed of an idea was formed that hope can be found in something as small as a Christmas gift. When the employees presented the idea to NFEC’s board of trustees, that idea found roots as trustees responded quickly with generous personal donations to the effort. Employees and their families followed suit, not only giving their time and money, but also taking the idea to local businesses, other NFEC members, vendors and contractors.

“It’s our duty to give back to those we serve,” Brent Meador, NFEC CEO, says. “We aren’t just a power company — we’re your co-op. My employees have a passion to care for every member.”

Although the program takes an entire year to organize, one day each December all employees arrive at the co-op in the early morning hours to form assembly lines to craft boxes for special Christmas meals. Initially, the program provided recipients with a bill credit and a basket of food that was the same for each recipient.

With each passing year, the baskets become more customized to each member’s need. For example, an elderly member who recently lost a spouse would not benefit as much from a large basket of food as they would an increased bill credit. Lineworkers then fulfill the mission by delivering the baskets to unsuspecting and deserving members.

Chris Barton, NFEC lineworker, says the program is one of the reasons he has remained committed to the co-op.

“I’m not going to lie, there’s been more than one time it’s been emotional for myself and the member,” Barton says. “Members are facing hard times, and it’s a big deal seeing the look on their face after an act of simple human kindness.”

Barton says it takes every employee to make the program a success, but that he can’t speak about Co-op Family Christmas without honoring late District Lineman Dan Dye. Dye passed away in 2020, but his passion for the program lives on through every employee he inspired.

“Dan’s commitment to the program was second to none. He loved it and worked so hard,” Barton says. “He brought in more donation dollars than anyone.”

NFEC’s Co-op Family Christmas program helped 33 families last year. Since the program’s start 18 years ago, more than 500 families have been recipients of the helping hand. One of those members is Jeremy Jones, a recipient now turned giver.

Jones recalls how, years ago, life hit him hard and his kids were young. He says Dye called him up a few days before the baskets went out and let him know his family would be receiving one.

“Dan said, ‘This is why we hustle all year — it’s for people like you,’” Jones recalls, his voice catching with emotion. “I broke down, and since then, I helped Dan every year.”

Jones no longer lives in the service territory, but now continues to volunteer by hosting a motorcycle dice run in memory of Dye, with all proceeds going to Co-op Family Christmas.

“Anything that I can ever do to help with that basket I want to do. I received it and now I get to give back,” Jones says. “I’m honored I get to do it in memory of Dan.”

In the panhandle of Oklahoma, more than 3,000 people live with hunger, according to the Regional Food Bank of Oklahoma. Considering the population, this means more than 11% of people in the area are in need. The employees of Tri-County Electric Cooperative (TCEC) based in Hooker, Oklahoma, noticed their members struggling and decided to to take action.

About 15 years ago, a group of employees came together to form the TCEC Employees Club. Employees can elect to payroll deduct from their checks to give money to the fund. A seven-member committee then decides how to distribute the money in the service area and matches the funds the co-op raised.

The recommended donation amount is $3.50 per pay period, but according to committee member Glenna Hise, TCEC human resources and benefits coordinator, many employees give greater amounts.

“The employees entrust us with their giving,” Hise says. “We want to ensure we are helping members in every area we serve and partnering with the food pantries has been a great way to serve the most members.”

The Turpin Community Food Pantry, run by the area’s ministerial alliance, is one of the recipients of the TCEC Employees Club’s gifts. The pantry provides food once a month and gives residents a month’s worth of groceries including dry goods, fresh fruits and vegetables and frozen meats.

“TCEC’s donation is incredibly helpful,” Reece Player, president of the ministerial alliance, says. “As our community members face the costs of inflation, the costs of providing food have gone up for us, too.”

Many families are now forced to live on one income. Whereas the pantry was feeding 20-30 families a month; Player says that number has increased to more than 40 families.

The TCEC Employees Club is donating $3,500 to eight food pantries in their service area, and with the matching funds from the cooperative, $7,000 will be distributed to help feed those in need this Christmas.

“We live in the communities we serve and see our neighbors who are going through a rough patch,” Hise says. “It makes us think how fortunate we are to be able to give back to them.”

Choctaw Electric Cooperative (CEC), based in Hugo, Oklahoma, has made it a priority to care for their communities in many ways over the years. Canned food drives, gifts for children and other ventures have made a positive impact. This year, the employees have elected to try something different: a warming tree.

Employees will bring gifts that many take for granted, like socks, scarves, blankets, gloves and hats. Member services staff Jia Johnson and Brad Kendrick noted there was not a similar service provided in their area and had the idea to invite members to be involved, as well as bring items to the co-op.

CEC provides power to six counties in southeastern Oklahoma, a large service area with many members in need. According to the Public Use Microdata Area (PUMA), the poverty rate in 2020 was more than 20 percent.

“In our area, the holidays can be extra hard,” Karan Daniels, accounts payable, says. “I hate seeing people go without things, especially kids. I’m really excited to be able to help.”

The idea of this program is that the co-op will be able to help members of all ages, from the youngest to the oldest. Consumer-member Sonya Maye is a hospice community liaison for CompleteOK, an organization that strives to provide quality of life for the end of life. Maye says the nursing homes and hospice patients are often forgotten members of the community.

“So many don’t have family who continue to come and visit, and they are alone and not receiving anything for Christmas,” Maye says. “To see their faces when they open something just for them is very touching.”

“Our co-op is always supportive of our community and doing their best for their members,” Maye says.

Johnson says although this is the first year for the warming tree, they are already seeing momentum and have plans to expand the program next year.

“The concept of giving back is baked into our cooperative principles,” Johnson says. “We want our members to know that as a co-op, we truly care.”

Each of these examples reflect the values of Oklahoma’s electric co-ops, which were created by neighbors coming together, sharing resources and committing to a cause for the common good. These values are a daily part of co-op business, but perhaps they shine the brightest during the holiday season.

To contact your co-op to see how you can help in your area this holiday season, visit our My Cooperative page.