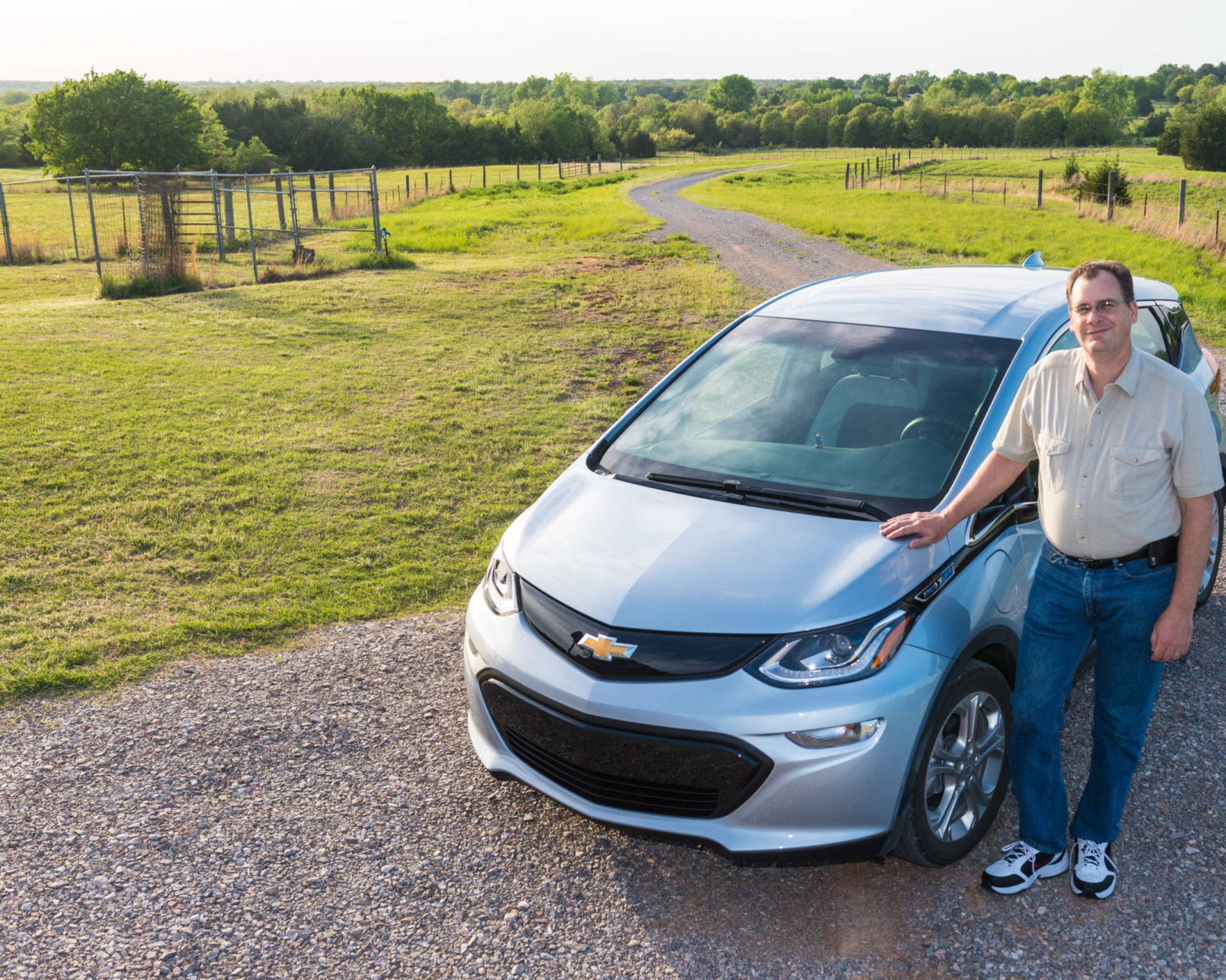 Fast, efficient and affordable: here's why an EV could work for you.

It could be the end of “vroom” and the beginning of zoom. In the dawning age of electric vehicles (EVs), the battery-powered motor rips like a hot knife through butter—and makes about as much noise. Gone are the rumbling engines and exhaust fumes. Gone, too, are the budget-busting gas prices, oil and transmission fluid changes, and a laundry list of other maintenance chores that accompany traditional car ownership.

Buckle your seatbelts, Okies: The quiet revolution of EVs is about to begin. Before you dismiss the electric car as the next greatest thing that never was, ponder this: By 2020, carmakers will invest $100 billion in EVs; this includes battery-powered electric vehicles (BEVs) that run solely on electricity and plug-in hybrids (PHEVs), which use gasoline to generate electricity that propels the car. Ford plans to boost its production of EV models to 40 by 2022. Other manufacturers from Audi to GM are rolling out new models of electric cars, SUVs, and even pickups. Volvo, hardly a slouch in the world of auto manufacturing, announced it would phase out production of gas-powered cars next year. In Great Britain and France, countrywide restrictions effective 2040 will ban all new diesel and gas-powered vehicles from their streets.

Closer to home, Oklahoma’s electric cooperatives are so convinced EVs will become commonplace they are positioning themselves to lead by helping members evaluate EV benefits while preparing their grid for the pitfalls and potential of increased electricity demand. From its generation and transmission headquarters in Anadarko, Western Farmers Electric Cooperative (WFEC) is partnering with its member co-ops in a statewide EV initiative that includes an information campaign, ride and drives events, and a significant investment in charging infrastructure in key rural locations. Mark Faulkenberry, WFEC senior manager of member relations, says their goal is “to have a public charging station in every co-op service territory across Oklahoma.” Kiamichi Electric Cooperative will install a charging station along the Indian Nation Turnpike. Norman-based Oklahoma Electric Cooperative approved a similar plan for their area; other co-ops are waiting on the green light from their boards. Management at Lake Region Electric Cooperative, Central Electric Cooperative, and CKenergy Electric Cooperative made a visible commitment to the growing market early on by adding an EV to their co-op fleet.

“This isn’t some crazy, hair-brained idea that only works for people in California or up north. Electric cars will be a part of our lives, and we want to make sure Oklahoma co-ops and their members are prepared to take advantage of it,” says Kylah McNabb, manager of commercial and industrial marketing at WFEC.

Among the first hurdles: putting to rest common misconceptions about EVs as high priced, short-range forms of transportation with all the power and appeal of a mamsie-pamsie golf cart.

“With any new technology, there are always stumbling blocks that must be addressed,” McNabb says. “We aren’t saying an EV will work for every person, but for a lot of people they do.”

Dion Lies is the typical electric co-op member—married with two kids, a nice home, and a hobby farm near Harrah. When he’s not working as an engineer at Tinker Air Force Base, you’re likely to find the Canadian Valley Electric Cooperative member on a tractor or hauling a trailer-load of horses behind his Dodge one-ton. Lies checks all the boxes beside “regular rural guy” except one: His other car is an EV.

Lies plugged into electric driving last year with the purchase of a battery-powered Chevy Bolt. As the buyer of the second total electric car sold by Bob Howard Chevrolet in Oklahoma City, Lies is an “early adopter.” In the life cycle of new technology, early adopters are the pioneers who hoe the first rows in the field of public acceptance. In other words, Lies is the friend you know that has one—and he’s happy to share his experience.

Like other trailblazers, Lies did his own research, carefully weighing his purchasing decision based on his knowledge of EVs and his family’s driving patterns. His engineering mind loved the efficiency of the electric motor. With some 20 moving parts compared to more than 2,000 required by the internal combustion engine, EVs eliminate a lot of trips to the shop. EVs’ low impact on the environment also appealed to him. Even with the carbon emissions released by fossil fuel-burning electricity generation plants, the Chevy Bolt produces about as much CO2 as a car getting 59 mpg. But Lies’ daily commute of roughly 50 miles roundtrip worried him. Would he run out of juice?

“I looked at a Nissan Leaf when the range hit 100 miles, but I just wasn’t comfy with that,” he says.

Range anxiety is one of the biggest stumbling blocks to wide-scale acceptance of EVs among consumers; more so among rural residents who drive an average of 34 miles a day.

“People are afraid they won’t be able to charge it, or they’re afraid they’ll run out,” says Travis Pace, EV project manager at Bob Howard Chevrolet. “They tend to get hung up on the one instance when an EV won’t work for them, rather than focusing on all the other ways it does work.”

Pace points to the research and development of more powerful, less expensive batteries—plus the electric co-op build-out of charging stations across the state—as the antidote to range fear. And, he adds, a lot of EV owners come to realize they only make one or two long road trips a year. For those occasions, they rent a car or drive another vehicle.

Of the five top-selling EVs of 2017, three offer a range of more than 200 miles. Typically, long-range EVs were too pricey for regular folks, but the maturing technology is driving prices down. Today, car shoppers will find several EVs available under $35,000. With a federal tax break of $7,500, coupled with some of the lowest electricity rates in the nation, it’s no wonder Oklahoma finds itself among the top 10 fastest growing markets for EVs.

When the Chevy Bolt rolled out with a sticker price of $36,620 and a record-setting range of 238 miles, Lies knew it was time to buy. Excited and nervous, he says he understands why some buyers would be resistant to the EV idea.

“I found myself wondering would it work? What if the car doesn’t charge? It was hard for me to make the mindset change and I’m an engineer who’s supposed to accept technology and change,” Lies admits.

All EVs come with standard charging equipment that works in any 120-volt outlet and provides five to eight miles of range per hour of charge time. Like most EV owners, Lies upgraded to Level II equipment that uses a 220-volt outlet and charges at 21 miles per hour. He hired an electrician to install the outlet in his garage and plugs in every other night for three or four hours.

In the beginning, he kept a close eye on his onboard battery gauge so he knew exactly how many miles he could go before running out. That impulse relaxed as he became more familiar with his car.

“My car hasn’t dropped below a half charge yet,” he says. “I tell people it’s just like a phone charger, but it’s a souped-up version.”

And his electric bill?

“I haven’t noticed much difference, to be honest,” he says. “Charging the car pulls about as much electricity as running a clothes dryer.”

As for fuel costs, Lies estimates he’s saved about half of what he would’ve spent on gasoline, which is what most EV owners can expect to recoup.

The Good, the Bad, and the Plug-ly

At CKenergy Electric Cooperative in Binger, Boyd Lee isn’t shy about sharing his EV experience, warts and all. Last year, the co-op purchased a Chevy Bolt, wrapped it in colorful plug-in emblem and turned the VP of strategic planning loose behind the wheel. Lee’s task: track and evaluate everything from fuel efficiency, comfort, road handling, and safety and share it with members via his lively blog.

“My duty as a technician is to do the thinking for people, suffer all the woes, and help make their decision about purchasing an EV a lot easier,” Lee says. “If I can do that, I’ve done my job.”

Lee’s fuel savings alone build a strong case for driving electric. With a daily commute from Chickasha, plus the miles he logs on co-op business, Lee averages roughly 33,000 driving miles a year. His previous car, a Ford Taurus, got 26.5 miles per gallon, not shabby for a sedan, however, in just five months of EV driving, he’s saved $828 in fuel costs.

Even when he factors in the extra 500 kilowatt-hours per month for charging, he’s coming out way ahead. And, he adds, the EV is one heck of a ride.

With the weight of the battery located low on the drive train, EVs hug corners like a jackrabbit on roller skates, Lee says. Any pre-conceived notions about an EV being some kind of clown car blew out the window when he touched the pedal, and it reacted instantly.

“It is hands down the most enjoyable car I’ve ever driven,” Lee says.

It’s roomy, too. Lee finds the four-door Bolt plenty comfortable, “and I’m kind of a fat boy,” he admits.

His biggest complaint: He can’t fit his golf clubs in without lowering the hatchback.

They are happy with both vehicles, but Vahdatipour points out, it’s less about fuel savings or low emissions and more about promoting electricity. EV electricity use will help balance the drastic swings in energy demand that drive generation prices. Because EV drivers typically charge their cars at night when demand is low, the added usage provides extra revenue without stressing the grid.

“This is about selling electricity and keeping our costs down. That’s good for our members,” he says.

It’s worth noting Vahdatipour’s other car is a rock-crawling Jeep Rubicon with a 4-and-a-half-inch lift kit. Would he consider rolling up a flowing waterfall or navigating an incline off camber in a four-wheeling, noiseless EV?

“If Jeep makes one, I’ll drive it,” Vahdatipour pledges.

He won’t have long to wait. Jeep CEO Michael Manley announced the coming of the plug-in hybrid Jeep Sahara in 2020.

EVs in the outback? Welcome to a brave new world.

Is An EV Right for You?

See for yourself at  www.chooseEV.com/ok. The site offers the nuts and bolts on EVs and includes a map of available charging stations, EV dealers, and an online calculator so you can assess EV benefits based on your driving habits.