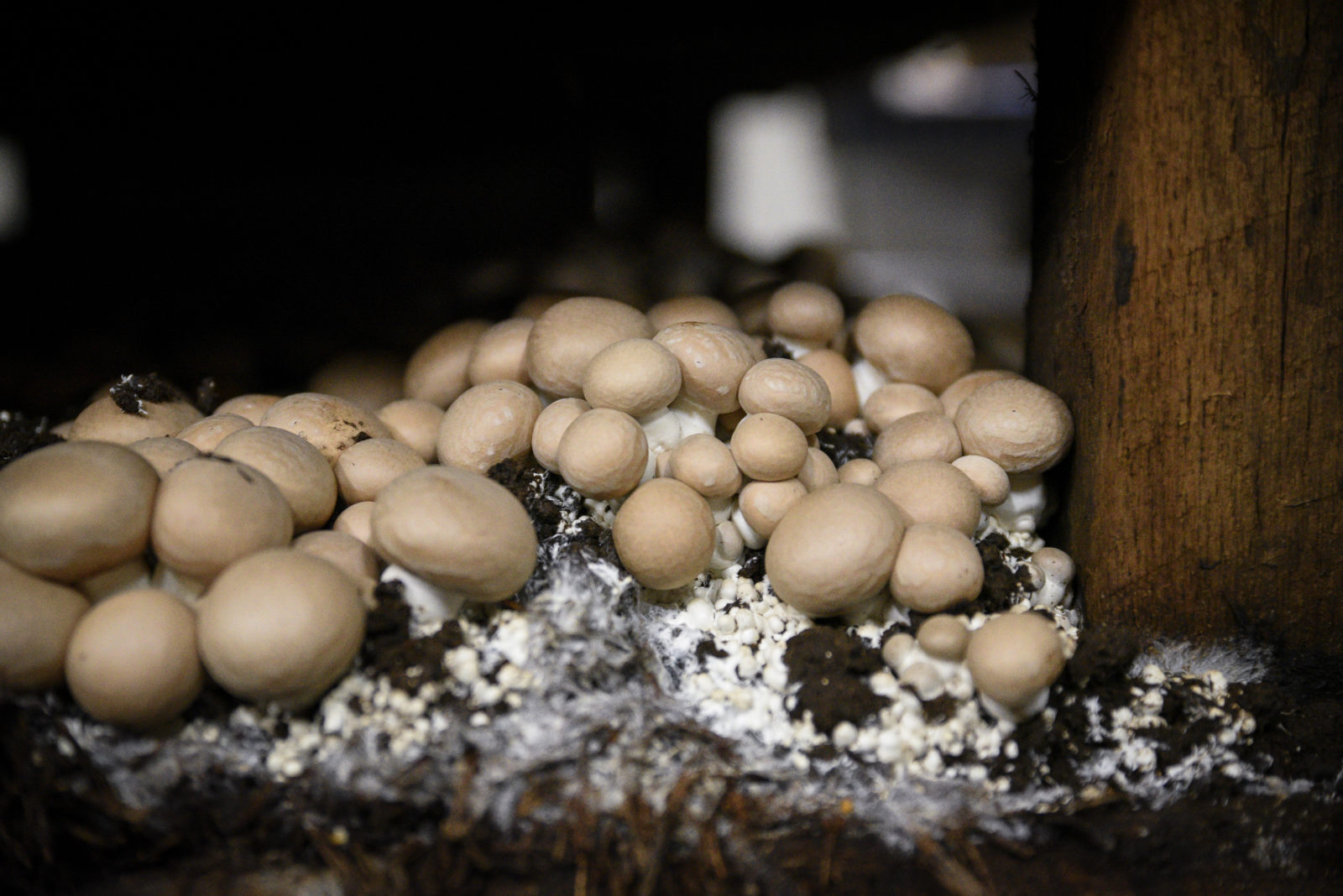 They can be stuffed, sautéed, and scattered on salads. But where do the mushrooms on your plate come from and how do they grow?

“Many people believe that mushrooms must be grown in the dark, but that’s a myth,” says Curtis Jurgensmeyer, CEO of Miami, Oklahoma-based J-M Farms.

Mushrooms are the edible fruit of fungi, which grow underground. While their lack of chlorophyll means mushrooms don’t need sunlight to grow, they don’t require darkness either. Mushrooms derive their nutrients from decaying organic matter in the soil.

A majority of the mushrooms sold in Oklahoma come from J-M Farms, founded in 1979 by Virgil Jurgensmeyer, his brother Joe Jurgensmeyer, and business partner Darrell McClain.

When Ralston sold the division, Jurgensmeyer and McClain moved to Oklahoma and started growing mushrooms.

“After studying the market in 1979, Oklahoma was selected because there wasn’t a fresh grower in the area,” Curtis explains.

Having a regional source for mushrooms is important for saving on shelf-life. Since they are 92 percent water, mushrooms are one of the most perishable produce items.

In 1982, McClain sold his portion of the company. Today, J-M Farms, a Northeast Oklahoma Electric Cooperative (NEOEC) member, is owned and operated by Jurgensmeyer’s three sons: Curtis, Terry and Pat.

“J-M Farms is such a vital part of the Miami community. They are great community stewards,” Cindy Hefner, NEOEC manager of public relations says.

At the outset, J-M Farms grew 40,000 pounds of mushrooms a week. Thirty-eight years later, the company’s 430 employees grow a total of 500,000 pounds of button, cremini and portobello mushrooms each week.

“Since we picked the first mushroom in March of 1980, we’ve grown 580 million pounds of mushrooms,” Curtis says. “We’re in the top 10 mushroom producers in the country for single-location growers.”

Curtis explains that mushroom farming is an involved process that takes 80 days from start to finish.

The first step is preparing the compost. After 24 days, the compost is loaded onto wooden trays, brought inside and pasteurized for a week. Next, the mushroom cultures are planted in the compost and stacked trays are transferred to climate-controlled grow rooms. The beds are then covered with a layer of peat moss and limestone powder. Two weeks later, mushrooms begin to pop up, doubling in size every 24 hours. Over the next 24 days, pickers harvest the mushrooms by hand.

After harvesting, mushrooms are sent to the record room where they are weighed and coded.

Finally, the fresh mushrooms are packaged and transported via refrigerated trucks to distributers and retailers in eight states.

“If you eat mushrooms in an Oklahoma restaurant, odds are they’re ours,” he says. “What we pick today we can deliver in the morning. They get to our customers faster and fresher.”

Curtis notes that mushrooms have numerous health benefits. They are high in protein, Vitamin D, potassium, and contain antioxidants, while being low in fat, calories, carbohydrates and sodium.

Broken Arrow, Oklahoma, resident, Bill Braughton, attests to the quality of J-M mushrooms. Trying to eat healthier and reduce the amount of meat in his diet, Braughton enjoys using mushrooms on salads, in omelets, and grilled with vegetables.

“They have a neutral flavor so you can blend them with a lot of dishes to make them healthier,” Braughton says.

For ideas on how to serve up the healthy, hand-picked, Oklahoma-grown mushrooms, check out this month’s Prairie Flavors recipes.

Category: Oklahoma Stories
Back to all stories
Cremini mushrooms Photo by Laura Araujo