Skip to content
Home // Stories // Oklahoma Stories // The Will To Fight 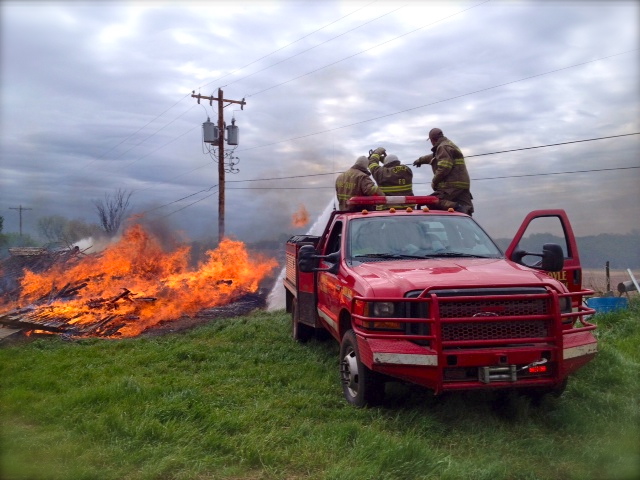 Three firefighters sit around a table in a small-town restaurant. The brotherhood is evident from the handshakes, hugs and good-natured jabs.

One is a paid firefighter and the other two are volunteer. In the same way wildfires don’t care if the truck battling the blaze says “career” or “volunteer” on the side, neither do they. They see traumatic and triumphant events many of us never will, and they shield us from what the average civilian couldn’t handle.

Although they take pride in their work, none of them are looking for a “thank you” or an “atta boy.” Each has radios and cell phones easily accessible, a visual reminder their time is not their own.

A blaring alert sounds from one of the radios, a signal loud enough to wake the dead. The static and stated codes and a rushed goodbye indicate, for one of the firefighters, this dinner will be cut short.

There are more than 900 fire departments in Oklahoma serving communities of 10,000 people or fewer. What many don’t realize is those departments are completely comprised of volunteers. These volunteers respond to incidents or “calls” without pay. They have full-time jobs, families and obligations of their own, like this very dinner.

As the heat builds elsewhere in rural Oklahoma, it is a grateful realization this is not the first—or last—meal that will grow cold in order to serve someone else.

“If you don’t have a servant’s heart, you don’t need to be in the fire service,” Luke Young, Woodcrest fire chief, says.

Young grew up around fire services. His dad is a veteran of Edmond Fire Department and was captain for 22 years. His brother has followed suit and is the current captain of the same department. Young was once a career firefighter, but he now owns a construction company and volunteers as the chief of Woodcrest Fire Department.

Currently, the Woodcrest Fire Department covers 56 square miles, serving about 7,000 people. While many national censuses indicate rural populations are dwindling, Young says he and the surrounding departments are seeing an increase of urbanites moving to rural areas.

Woodcrest averages about 400 calls a year. The trend, however, is feast or famine. There may be days without calls, then other days will have several emergencies needing immediate attention.

The majority of volunteer fire departments are now 80 percent medical according to Young. Coyle Fire Department is one of many that has fully transitioned into an emergency response role as well. After becoming medically certified, Coyle Fire Chief Michael Galbraith says the call load jumped from 50 per year to 125.

“If we weren’t here to provide those services, the nearest help is at least 12 to 15 minutes away,” Galbraith, Central Electric Cooperative member, says. “That’s the difference between people living and dying.”

The cost to provide firefighting and emergency medical equipment is steep. Galbraith can recall a time when the fire station struggled to afford gas to put in the trucks to get to the fires. He would ask the gas station to turn on the pumps and they would make good on the payment when they got back from the fire.

“A pool of guys would chip in what they had in their wallets,” Galbraith says. “We’d all put in $5 or $10 until we had enough.”

Now a countywide sales tax covers 99 percent of the station’s funding, but the fiscal challenges for equipment, training and maintenance remain real. There are many ways citizens can volunteer to help these firefighters continue to fight for their communities.

Supporting Those Who Serve

When purchasing any property, just like checking the electric provider and school district, homeowners should investigate to which rural fire district their property belongs. Firefighters point out often that the city listed

on the mailing address may very well not be the provider.

“A call to your fire district ensures they know the lay of your land and can come best-equipped to help protect your property should the need arise,” Young says.

Fire dues vary per district, but they average about $65 per property annually. If a fire occurs on that property, as long as it is not an illegal burn, the owner will not be sent a bill. It’s like an insurance policy for your fire protection.

However, if an illegally started wildfire burns the owner’s land or jumps onto another property, the owner will be responsible at an hourly rate. If the wind is blowing, hundreds of acres could be turned to black. The cost to battle that blaze 24 hours per day for several days could in turn put the property owner in the red.

Another way citizens can help is by providing food to the volunteers. Galbraith recalls working a wildfire for eight going on nine hours. They took turns pausing to pass around bags of Braum’s hamburgers.

“Even if it’s six hours cold, that first break you get will taste like a steak dinner,” Young says.

Food, Gatorade and bottled water are always welcome if citizens are not able to donate financially. Most importantly, the firefighters encourage people to volunteer.

“I am where I am today because of them,” Withey says. “I will never forget where I came from.”

Although Withey is now paid, he says fire services is not a job; it’s a way of life. He describes his departments, both volunteer and paid, as “one big family.”  Because of the great need, it can be too easy for firefighters to place their department over their personal lives.

His wife, Nicole Withey, can speak to the struggle first hand, but she says the passion to help others outweighs the inconvenience.

“You have to understand and be willing to be strong enough to help them carry the burden,” Nicole Withey says. “I know all the people at the station and they are my family too.”

retaining younger volunteers. Many volunteers come from two-income families and must have employers who are willing to let employees off to run calls.

Beyond the crisis response role, time commitments can include training, fundraising and vehicle and station maintenance.

To begin serving the community, a person does not need any prior training. The department will take care of all courses and certification. For Galbraith and Young, the most valuable quality a volunteer needs is the heart to serve.

“Our job is to deliver the same respect and kindness to everyone,” Young says. “And you have to have the strength to face that you are going to lose more than you can save.”

Of the many stories shared at this dinner, one especially stands out for Galbraith. He responded to a call at a schoolteacher’s home—a community member he knew. The husband was suffering a heart attack, and Galbraith and his team did everything they could to save him, but the outcome was not the happy ending for which all were hoping.

Galbraith was heartbroken for the family. He admitted he was scared to talk to the schoolteacher again, but upon seeing her weeks later, the first words out of her mouth were, “Thank you. Thank you for doing your best to save him.”

“Even in the worst times, people losing people and their lives being torn upside down, even if they didn’t get what they wanted, you do everything in your power to help,” Galbraith says. “It keeps me coming back that with every call, we have the chance to make a difference.”

Cooperative: Central Rural Electric Cooperative
Category: Oklahoma Stories
Back to all stories
The Coyle Fire Department responds to about 125 calls per year. Photo by Nikki Withey