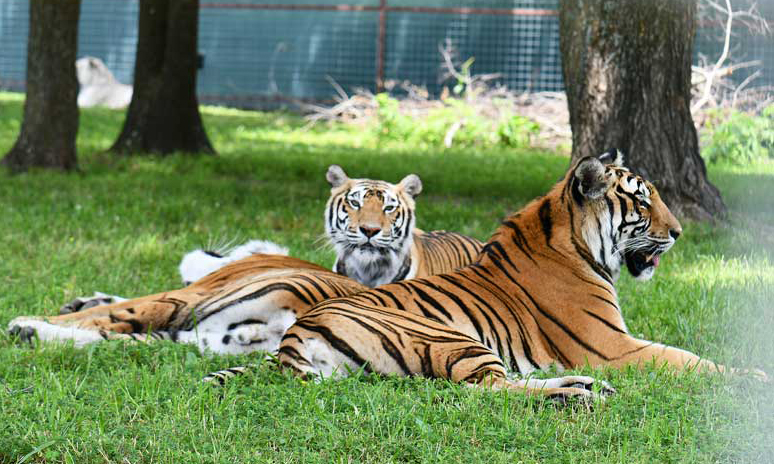 Circus tigers with a conservation cause find retirement at Growler Pines

Ryan Easley stands with confidence inside the smallest of several secure, steel-framed tiger habitats that he built at Growler Pines Tiger Preserve. This one is especially for demonstrations.

Three tigers sit on stools behind him. A fourth, 9-year-old Zuri, nestles her head against Ryan’s shoulder as he prepares pink and purple children’s fingerpaint. She patiently lifts her paw when Ryan gives the cue, pressing it into the paint then onto white canvas.

Ryan’s wife, Elaine, and their 9-year-old daughter, Lily, stand nearby as a fan blows cool air under the cover of a stand of bleachers, where visitors can sit in the shade while Ryan tells the story of his family and the tigers he calls part of it.

Each tiger was born in a zoo before coming to him. They all have different personalities that must be respected and managed, and they — even now, in retirement in Hugo, Oklahoma, surrounded by prairie and pine trees — serve as ambassadors for the conservation of wild tigers and their habitat.

Ryan and Elaine, Choctaw Electric Cooperative members, met while traveling with circuses across the Midwest. Elaine was raised as the seventh generation of her family in the business. Ryan grew up around elephants in St. Louis, Missouri, thanks to his zookeeper father. However, at the age of 21, he visited a circus and was offered an apprenticeship with the tiger trainer. It was an offer he could not resist.

In 2011, his mentor retired and left him with five tigers, including Zeya, a 13-year-old still with the family. The original five formed the foundation of his business, ShowMe Tigers. He added educational components to entertainment — teaching the public how and why they train tigers.

The couple always planned to retire to Hugo, nicknamed “Circus City, USA,” for its history as a winter home for dozens of circuses. In late 2019, they purchased a piece of land eight miles outside of town. The next spring, COVID-19 shut down entertainment venues. Though they had anticipated several more years of traveling while investing in their Hugo property, they decided to retire and make Hugo home.

A Family and Community Affair

In June 2021, the Easleys opened Growler Pines for educational tours. It was a decision that Kelli Stacy, Hugo Chamber of Commerce executive director, says generated “excitement that quickly turned to absolute joy.”

“Ryan and Elaine care so much about their animals, and they share the results of every inspection they’re subject to,” Stacy says. ShowMe Tigers has undergone 37 consecutive, surprise inspections by the U.S. Department of Agriculture without a single issue.

“Their transparency, along with their respect for the animals, is exactly what one could hope for from a preserve,” Stacy says.

Each member of the family plays a role at Growler Pines, even Lily — the self-appointed concessions manager — who can help guests choose their favorites of Zuri’s paintings as well as other memorabilia.

Sales from tickets and merchandise primarily go to pay the bills, including the 160 pounds of beef and chicken consumed by the 260- to nearly 500-pound tigers each day. However, portions of sales and donations also go to support wild tigers.

Several years before Growler Pines, Ryan started incorporating wild tiger facts into his show. For example, the world has lost 97% of its wild tiger population in the last 100 years. Tiger habitat has decreased by 93%.

However, he wanted to do more than just talk about the issue. In 2016, he partnered with the International Elephant Foundation (IEF). Since then, the family and their tigers have raised more than $45,000 for IEF projects that aid conservation efforts in tiger-populated areas.

Funding helped add patrols in difficult-to-access areas of Sumatra with known poaching. Most recently, Growler Pines supports communities in Nepal where tiger populations have increased but so has conflict between the animals and people. As tigers, an important part of the natural ecosystem, return, this project provides resources to help villagers live more safely. It’s a cause for which Ryan feels especially empathetic, as a father and now a Longhorn cattle raiser.

The family has taken in four additional tigers in need but do not plan to add more. Instead, they are focused on expanding facilities to further stimulate their tigers and provide opportunities for visitors.

“Our tigers have worked so hard for us and as ambassadors for their species for so many years,” Ryan says. “We want to give them the retirement they deserve.”

Tours are scheduled Saturdays in October and November until closing for winter. Private tours and school field trips are also available. Visit growlerpines.com to learn more and book your #EncounterToInspire.