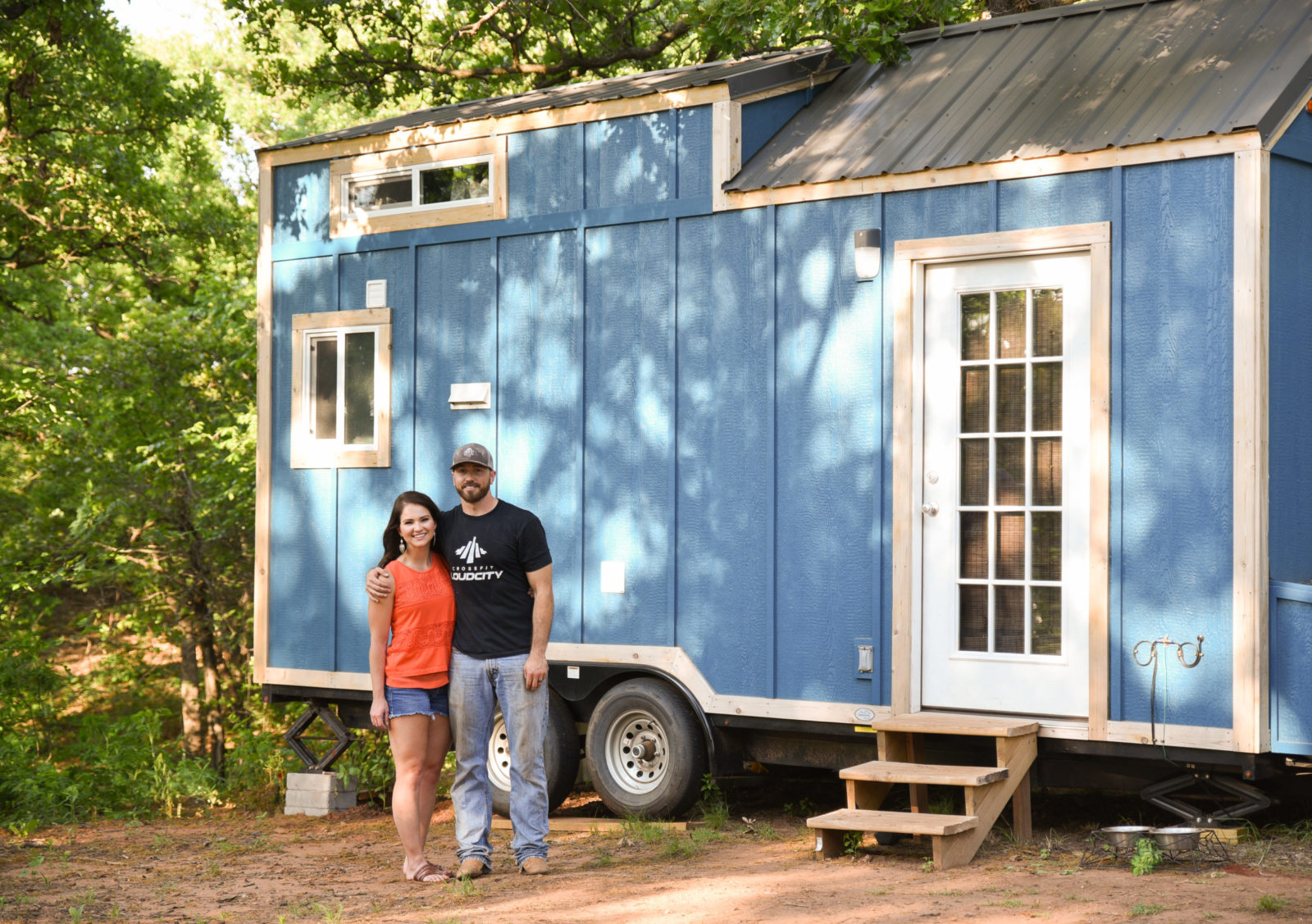 It might be smaller than a two-car garage garage, but Trevor and Cassie Davis call a 240-square-foot “tiny house” in Luther home. The Central Electric Cooperative members are two of a growing number of Oklahomans who are choosing to simplify rather than striving to keep up with the Joneses. The trend to go tiny has grown as has the popularity of TV shows featuring families who live in minuscule spaces.

“I work in Edmond where a lot of people have really nice homes,” says Trevor Davis, a schoolteacher and basketball coach. “People think it’s funny that we live in such a small space. But my students love hearing about it.”

After getting married in 2016, the Davises lived in a rented condo. As their lease was set to expire, they considered alternative options for housing.

“We had always been fans of the tiny home HGTV shows,” Cassie Davis, a nurser practitioner in Stillwater, says. “We didn’t know where we wanted to end up so we didn’t want to buy, and we didn’t want to rent again. That’s when we started looking into tiny homes.”

Once they made the decision to downsize, they contacted a tiny home builder in Idaho. The contractor helped them to customize the home to their liking. Inside they have a fully equipped kitchen with stove, oven and refrigerator; a washer and dryer; and a bathroom complete with bathtub and shower. Their queen-sized bed is lofted above the kitchen, where they also have storage for clothing and other belongings, all accessible via a narrow staircase.

“Trevor built custom benches on wheels that turn into a full-sized bed. We’ve packed a lot into the space,” Cassie Davis says of the compact, but well-thought-out floor-plan.

The cushioned benches double as their living room furniture, where they enjoy meals and evening entertainment from their wall-mounted TV.

In April 2017, construction of their bright blue tiny home began and by summer they had transported their home to Oklahoma to transition to tiny living.

To facilitate the move, they mapped off the size of the new home with painter’s tape in their rental home.

“It was hard to go from a house to a tiny house. We didn’t realize how much we had accumulated,” she says. “The entire bottom floor of our tiny house fit into the kitchen of our old house.”

The Davises say living with less has taught them to appreciate simplicity.

“One of my favorite things is knowing you can live with less junk and clutter—things you don’t need—and that you don’t need to live in a gigantic house to be happy,” Cassie Davis says.

Another benefit has been the reduced cost of living, including energy savings that go along with living in a smaller space.

“We’ve definitely seen a savings on our electric bill and our other utilities,” she says.

Cassie Davis also enjoys living in close quarters and the time she and Trevor get to spend together—though she jokingly notes there’s no where to run when someone is upset.

The Davises had their home RV certified so they can park at campsites. Last summer, they camped at Arcadia Lake before moving to Luther in the fall.

“We thought it would be fun to travel with it, that we could go on trips in the summer in our house,” Trevor Davis says. “In reality, it’s not very travel friendly. It’s a big wooden box and it’s hard to pull. But it was fun staying at the lake, kayaking and camping all summer.”

Living in a tiny space has not been without its challenges.

“In the winter, the days are shorter and it’s cold so you can’t be outside as much. The clothes are bulkier and take up more room,” he says. “It can feel like it’s closing in on you.”

Today, the Davises’ home-on-wheels occupies a fraction of their five-acre slice of Oklahoma countryside. In the fairer months, Trevor Davis spends a lot of time outside, working to clear the land. He plans to build a patio this summer where the couple can enjoy al fresco living.

Despite some difficulties, the Davises say they have appreciated their time in a tiny home. They especially enjoy country living and intend to eventually build a home on their rural acreage.

“We don’t plan to live in it forever. We’re close to a lot of wedding venues so we may use it as a guest house or offer it for rent on Airbnb,” Cassie Davis says.

For those intrigued by life in a tiny home, Cassie Davis offers some advice.

“It’s a ton of fun, but it’s definitely a temporary solution. If someone is considering a tiny home, they should stay in one and get the feel for it before buying one.”

TINY SPACES for business and fun

Oklahomans looking to “go tiny” have a locally created option: shipping container spaces. Three Oklahoma State University students started a company that takes recycled shipping containers and transforms them into everything from tiny homes, to hunting lodges and commercial spaces.

“In early 2015 a friend of mine from college, Ben Loh, contacted me and asked me if I wanted to build a container home. It sounded like a fun project,” says ModernBlox co-founder Lee Easton. “We spent every Saturday for the next four of five months getting together in Stillwater to work on the container home he had designed.”

“Part way through, we started putting pictures on Facebook. People took notice and we decided that it needed to be a business,” Easton says.

From that, Tulsa-based ModernBlox was born. The business has gained traction as the company has received consulting and design work from across the U.S.—and even as far away as Puerto Rico, South Africa and India.

Manufactured in Tulsa, the ModernBlox shipping container units range in size from 160 to 500 square feet. The well-insulated structures are energy efficient and sturdy enough to stand up to strong Oklahoma winds. The 8-by-45-foot HuntingBlox is designed with the Okie in mind, as a weekend retreat for the outdoor adventurer, while the 8-by-20-foot BarBlox makes for a streamlined retail space.

“We have done a lot of unique, highly custom projects, but our hands-down favorite is the AutoBlox,” Easton says.

Designed for a Tulsa car-enthusiast, the AutoBlox fashioned five side-by-side containers into an immaculate storage unit for an auto collection. Inside features a speckled paint shop finish on the floor, custom-painted walls lined with racing stripes, LED lighting overhead, and remote-controlled roll-up doors that make it easy to pull cars in and out. For more information, visit http://modernblox.com.

Category: Oklahoma Stories
Back to all stories
Cassie and Trevor Davis contacted a contractor who helped them customize their tiny house. Photo by Laura Araujo