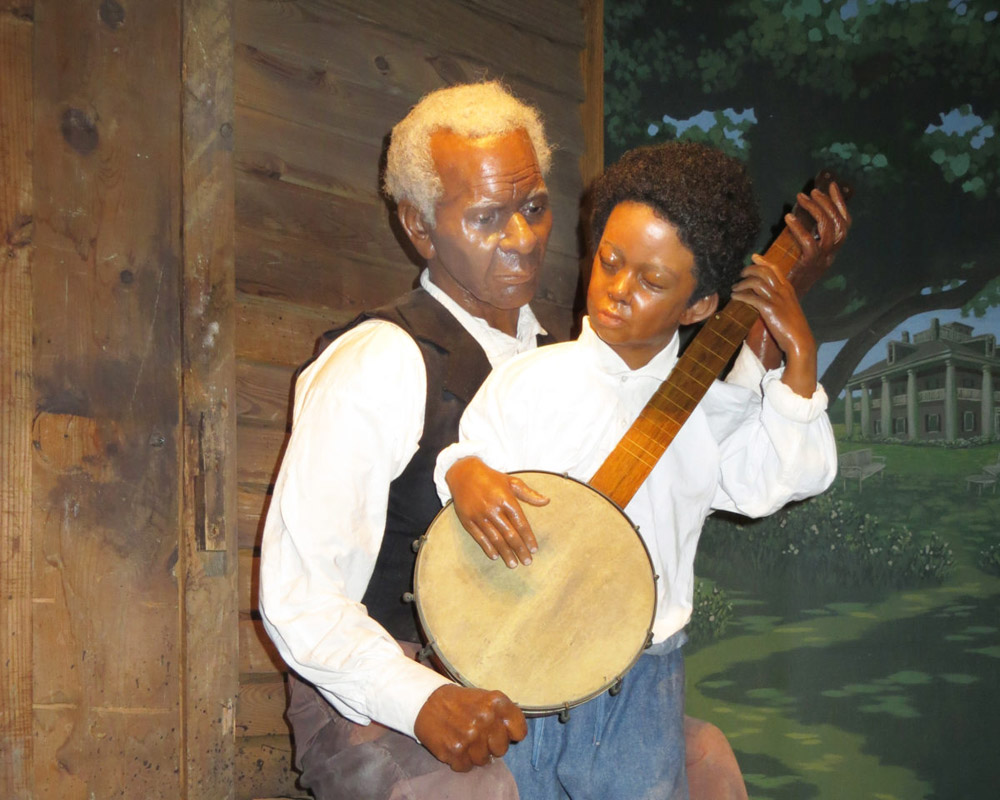 What inspires people to collect things?

The answers are as varied as the individuals. Some of Oklahoma’s most unique museums are based on personal passions—a child’s hobby grown-up, a desire to preserve history or a celebration of art, beauty and utility.

Brady Hunt caught the banjo bug in high school. His mentor George “Doc” Newman, who played the banjo at Shakey’s Pizza Parlor in Del City, Oklahoma, told him, “Brad, someday we won’t be around anymore. Someone has to learn this music and pass it on.”

In 1992 Hunt founded the Guthrie Jazz Banjo Festival in Guthrie, Oklahoma. The idea of a banjo museum began percolating but time and finances didn’t come together.

Visitors get an eight-minute, whirlwind look at 370 years of banjo history, then the opportunity to learn more details ranging through African and American slave roots, college banjo clubs of the 1880s, the Jazz Age, hillbillies and hootenannies.

More than 300 instruments are on exhibit. Many of them display intricate inlay and design work. In addition to the permanent collection a new exhibition features Roy Clark: America’s Super Picker.

The late Pauline Salyer of Oklahoma City took up china painting in the 1940s. It became Salyer’s mission to promote the pastime.

In 1962 she founded a magazine, “The China Painter,” which is still being published. Five years later she founded the World Organization of China Painters which now has clubs in all 50 states and nine foreign countries.

In addition to all the examples of artwork, graphics give guests information about the history of porcelain, the types of porcelain and the difference between porcelain, earthenware and stoneware. One display case features a collection of Hummel figures along with the biography of Berta Hummel and why her figures were banned by Der Fuehrer Hitler during World War II.

Classes and materials are also available on site.

“You don’t have to know anything to start,” says Oklahoma Electric Cooperative member Adrienne Walls Mauch, a class participant. “I started near retirement and I’ve been painting for 16 years. My house is full of things I’ve painted.”

Stark. The artist who turned the Teenage Mutant Ninja Turtles into action figures has a long history with toys.

“At 10, I got a job delivering newspapers so I could buy toys—mostly G.I. Joes. I talked my parents into letting me turn the basement into my personal playroom. I had all my toys down there and arranged them the way I wanted—sort of a mini-museum,” he says.

Stark’s passion was the impetus for the creation of Pauls Valley’s No. 1 attraction. The Toy and Action Figure Museum opened in 2005. Since then the museum has attracted visitors from all 50 states and four-dozen foreign countries.

Exhibits include over 13,000 action figures and toys—toys on shelves, toys on the wall, toys hanging from the ceiling. There are even toys that children can handle. Kids can try on costumes or pose for pictures behind life-sized photos.

Not just for kiddies, other exhibits salute artists who draw the characters and sculptors who create action figures. Technical information tells what goes into the actual creation of today’s sophisticated figures.

The pièce de résistance is a massive diorama of an adult toy collector’s bedroom. Superheroes and space aliens mingle with puppets and Mr. Potato Head. Explanatory materials read, “It is not quite clear what the toys have done to the occupant of the bedroom, but we are confident that whatever it was, it wasn’t pretty.”

The late Ralph Enix purchased a drug store in Kingfisher, Oklahoma, from pioneer pharmacist C.P. Wickmiller. He operated the business for almost 50 years. It was his dream to establish a museum to honor Oklahoma’s earliest pharmacists.

The Frontier Drugstore Museum is housed in the 1890 Gaffney Building, once the home of the Lillie Drug Store. Pharmacist F.B Lillie opened his pharmacy on April 22, 1889, and held the first Oklahoma license issued in 1891.

Many of the furnishings in the museum date back to 1889: the rolltop desk and safe from Dinkler Drug in Hennessey, Oklahoma; wall cases belonging to Randolph Drug, the first black pharmacist-operated drug store in Oklahoma City and a 1920 soda fountain from Cleo Springs, Oklahoma.

The shelves and cases are filled with antique medicines and nostrums. It’s a wonder any of our ancestors survived remedies like coal oil for sore muscles, turpentine and sugar for sore throats and asthma cigarettes.

Next to the museum is an Apothecary Garden. Visit it to learn about medicinal plants, trees and herbs—or just to enjoy the bubbling fountain and chiming Centennial Clock.

Category: Oklahoma Stories
Back to all stories
Banjos came to America from Africa. Photos by Elaine Warner