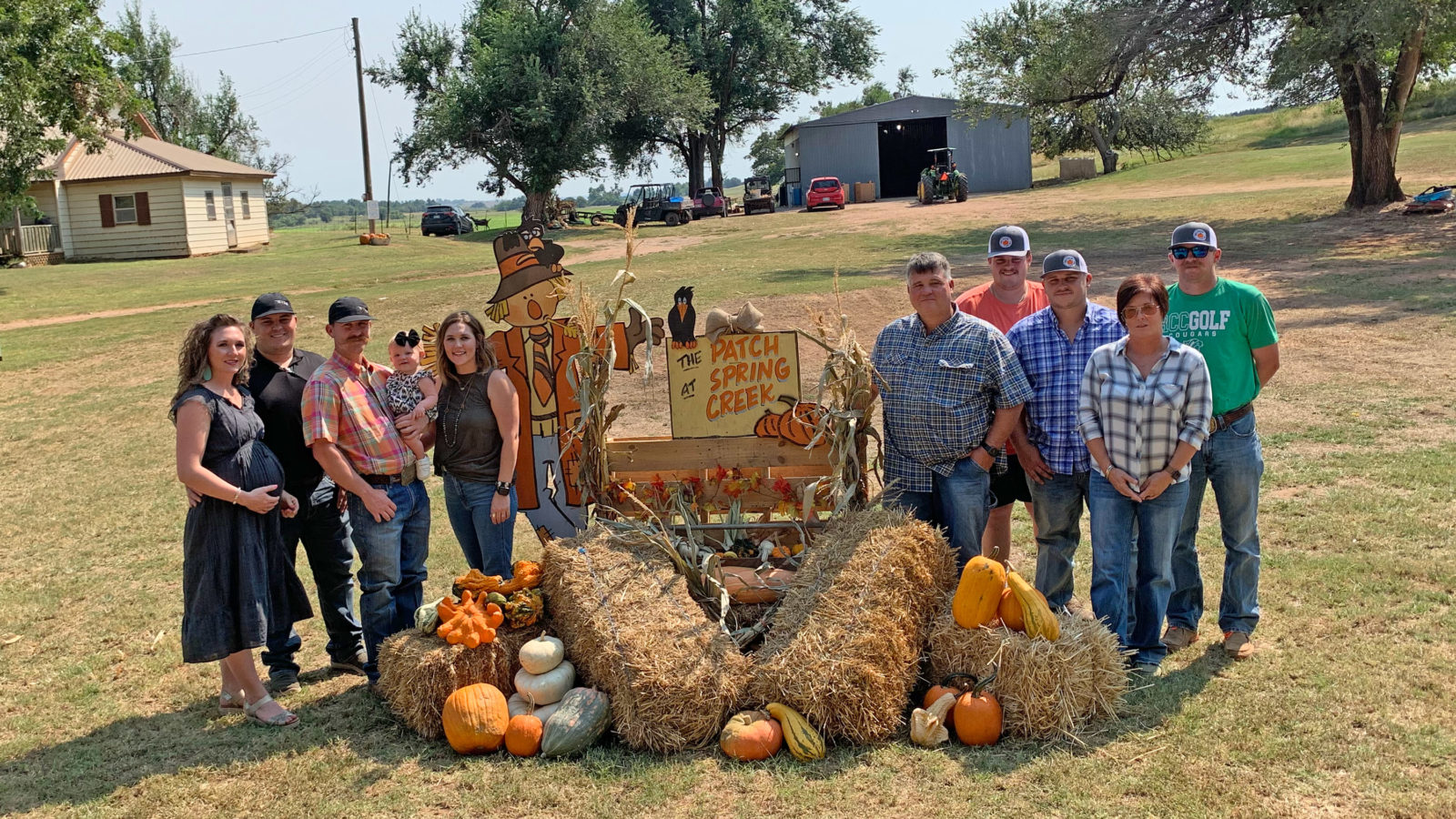 From carving, to decorating to feeding livestock, to being striped, specked, round or flat, pumpkins are as varied as the purposes they serve.

On a piece of farmland, south of Binger and north of Anadarko, Chris and Krystal Newell and family grow about 60 varieties of this popular fall crop in Gracemont, Oklahoma, at what has become known as The Patch at Spring Creek.

As Chris talks about pumpkins, from the price of seeds, to the ideal weather they need (drier than this summer has been), to naming and pointing out all breeds as he drives an ATV through the fields, the people listening could easily think he grew up tending to these gourds his whole life. But caring for this highly versatile produce is pretty new to the entire Newell family who have been known for quality watermelon and cantaloupe crops for nearly two decades.

Krystal and Chris, CKenergy Electric Cooperative members, have been married 30 years and like to travel, especially to Nashville. In 2019, growing pumpkins was an idea to fund some of those adventures.

“I didn’t know a lot about pumpkins before then, other than people like them,” Chris says.

He planted about 18 acres that first year, and says he researched online a lot and also learned by “trial and error.” The Patch opens to the public in late September, and people can drop in to take a tour, pet the goats (Juanita and Frieda), take some fall photos, and of course, buy a few pumpkins for carving, eating or decorating.

In its third year, pumpkins now make up about 40 acres of the Newell farmland.

“He doesn’t do anything in small doses, but this is one of the better ideas he’s come up with,” Krystal says about her husband, poking fun as is the style of the whole family.

Krystal and Chris have three adult sons: Dalton, 29; Barrett, 26; and Montana “Mo,” 23. Once Mo graduates from Oklahoma State University in December, all three sons will be OSU alumni, Mo and Barrett with degrees in agriculture education and Dalton with a doctorate in veterinary medicine. Barrett and his wife Lauren, an ICU nurse, have a 1-year-old daughter, Masyn Rose, the first grandchild in the family, born Oct. 9, 2020—”Right in the middle of pumpkin season,” Chris points out.

Dalton’s wife, Kass, the executive vice president for the Oklahoma Youth Expo, gave birth to daughter Nyla Jayne in September. Despite all the Newells working full-time careers outside of the farm, Chris and Krystal included, they all take on varied and significant roles at The Patch, from helping with planting and harvesting to managing social media accounts.

“Barrett and Lauren are great with Facebook and all that, but Barrett is likely to appoint himself employee of the month frequently,” Krystal jokes.

With 40 acres of pumpkins, along with a variety of other decorative gourds, The Patch has attracted an array of larger-scale clientele. As colorful gourds have gained popularity as a staple of fall décor, landscapers make up a large portion of their bulk sales, as well as individuals selling at farmers markets. Flower shops, boutiques and brides decorating for fall weddings have also become frequent clients. But aside from the bulk sales, the farm offers school visits and other educational and recreational activities to the community as well.

Eldest son Dalton explained that the pumpkin patch is an example of diversified agriculture.

“It’s a seasonal thing set in the middle of a working farm,” he says.

Krystal likes the idea of visitors leaving with a better perception of the work that goes into agricultural jobs. Daughter-in-law Lauren, who manages The Patch’s Tik Tok account, agrees. While the content is meant to be fun, Lauren also wants it to be educational.

“The pumpkins here, these are ours that we raised. I want people to understand the working aspect. It’s a true working farm. Coming here is a good hands-on experience,” she says.