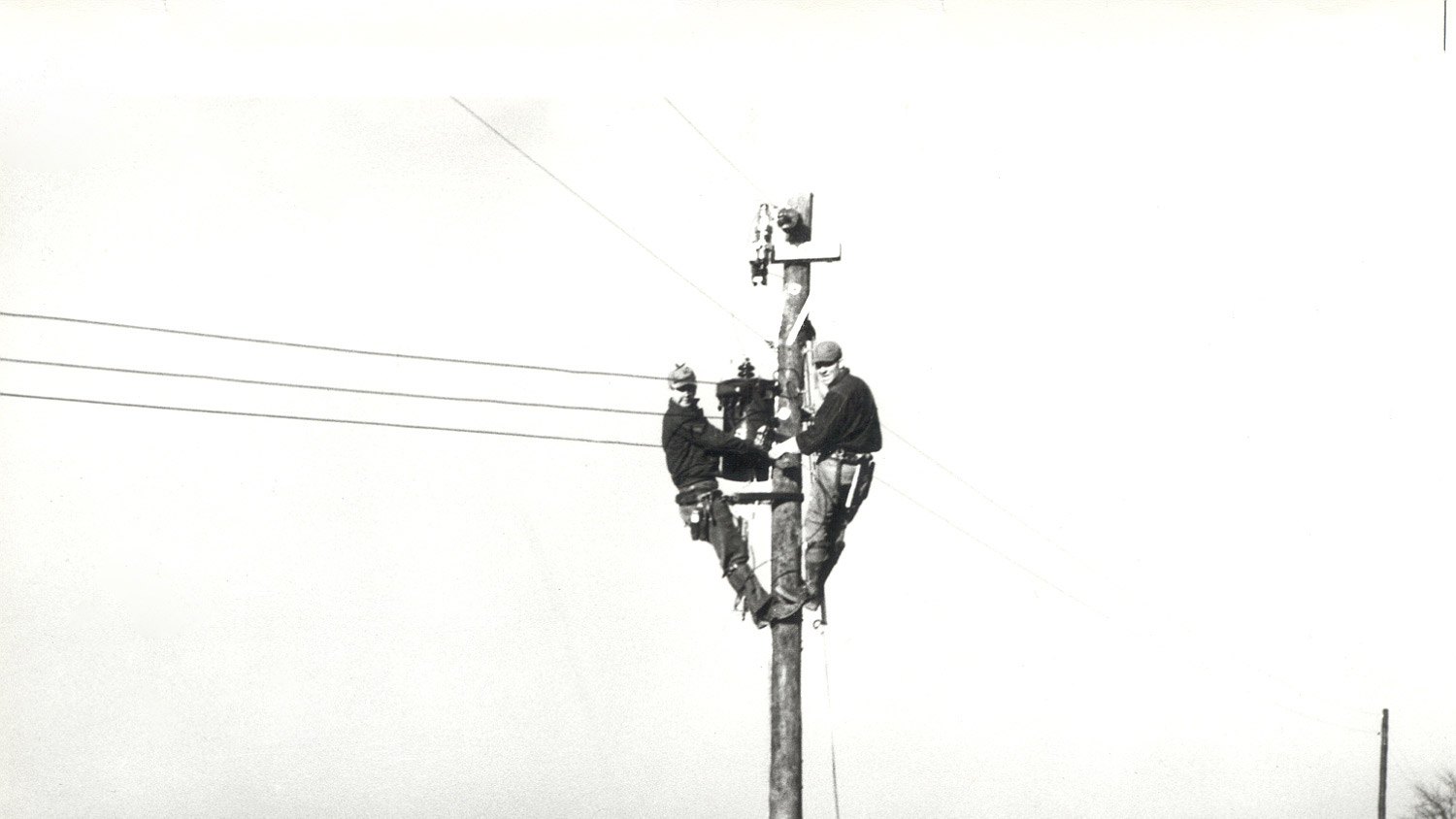 Electrifying rural Oklahoma is a story that most only read about. Nettie Clifton and an entire generation lived it.

Her son, Ray, and granddaughter, Summer, prepare dinner in the adjacent kitchen. Her homemade cherry pie rests under a dish towel on the counter. The dominos have already been retrieved for a post-dinner game of moon.

Outside this idyllic farmhouse north of Minco, Oklahoma, the setting sun casts its final gold and coral hues, giving way to a still night. A quartet of soft white bulbs in the ceiling fan above Clifton’s head glow with life, and the air conditioner across the room continues to churn out its breeze.

Life looked, felt and sounded very different on this farm when Clifton was a child. For the 88-year-old, and an entire generation raised where the concrete ends, life began before electricity was an expectation.

So, until the flank steak is served, Clifton tells the story of how her family farm became one of the first to be electrified in the region. It’s but one chapter in the revolutionary story of when power came to the prairie.

Little House on the Prairie

JK Phelps relocated from Springfield, Nebraska, to western Oklahoma with his wife, Nettie Elizabeth (Clifton’s namesake), their four children and a trusty horse. In December 1903, Clifton’s father, Julian Knight Phelps Jr., was born. The couple would welcome another seven to the family.

“My grandmother had 12 children in 24 years and never lost one,” Clifton says. “That’s amazing considering the era.”

JK Phelps provided for his ever-growing family as a literal horse (and cattle) trader, while working the 160 acres.

Even though Phelps Jr. was fifth in line, he stayed on the land and worked side-by-side with his father for almost three decades. When he married Lou Harpole in 1930, the couple built a two-room house on the family farm. Soon, their family blossomed with son, Kenneth (1931), and daughters Nettie (1933) and Jessie (1936). The same year Jessie was born the younger Phelps were managing the farm, which focused on raising cattle and hogs. Phelps also worked as a custom hay baler.

Events from the early 1930s now fill chapters in history books. The Great Depression was winding down, and the Great Dust Bowl was just beginning to blow. Clifton’s earliest memories of life include her mother wetting white feed sacks and putting them on the screens to keep the dust out of the house. “There wasn’t much farming in those years,” Clifton says. “The land didn’t make a crop, but at the same time it didn’t blow away like other people experienced.”

More than 1,300 miles away in Washington, D.C., President Franklin Roosevelt signed an executive order that remade rural America and redefined how Clifton’s family and neighbors lived.

The majority of cities were fully electric by 1930, while nine out of 10 rural homes in Oklahoma were without electric service even into the mid-1930s. Private companies were reluctant to spend resources on electrification away from a city.

“It wasn’t profitable to serve the rural areas,” says Boyd Lee, vice president of strategic planning for Binger-based CKenergy Electric Cooperative. “The same challenge exists today that existed in 1937: it costs rural cooperatives more for a mile of line, because we put three members on a line; where in a city, you can put 50 or more customers on a line.”

The lack of electricity slowed economic development and hampered prosperity of rural America.

Roosevelt recognized the challenges and created the Rural Electrification Administration (REA) in 1935. The REA soon wrote the Electric Cooperative Corporation Act, “a model law that states could adopt to enable the formation and operation of not-for-profit, consumer-owned electric cooperatives.”

The first electric lines that stretched into western Oklahoma were focused on powering the schoolhouses that sat on the main roadways. The schools were also used as community centers, so their priority only made sense.

Any farm that was immediately off these mainlines could—if they provided manual labor—attach to the line. The Phelps farm sits just a quarter mile from Lone Rock School so they jumped at the chance to be an early adopter.

Clifton was almost 6 years old when the farm was fully electrified in 1939. She doesn’t recall her first electrical experience, but she remembers the shocking change in lifestyle.

“After we got electricity, we threw out our ice box and bought a Montgomery Ward refrigerator,” she says with a laugh. “We also bought a wringer washer. Momma was so happy about that. And we kids were happy too because we didn’t have to pump water. If the wind wasn’t blowing (and turning the windmill), Jessie and I would have to pump a tank of water. That was hard work. Once we got electricity, we had a supply tank that served the house. It was life-changing.”

All of this revolutionary power cost $3 a month (or between 4-5% of the era’s annual income). It was a budgetary strain for most farmers to absorb. Still, rural families eagerly lined up to be added to the line. Most, however, waited for more than a decade thanks to a dictator on the other side of the globe.

The same year that Clifton was born, Adolph Hitler took power in Germany. The same year the Phelps family farm was electrified, World War II began. Two years later in 1941, Japan bombed Pearl Harbor and the United States entered the war. Most of the labor and supplies required for electrification were now fueling the war effort.

“If you didn’t have electricity by 1940, then you didn’t get it until after the war,” Clifton says. Her partner Gene Rowe and cousin George Kerlick can both attest to the agonizing wait.

Kerlick, 95, recalls being 12 years old and sitting outside the Lone Rock Schoolhouse, watching the pole installation. While the school had electricity, homes just “a mile and three quarters” down his road waited until 1948 (three years after the war ended).

Rowe tells a similar story. His father wired their house in 1946 in anticipation of electrification. It took three more years for the lines to the local schoolhouse and another two years before his father was able to electrify the new dairy barn.

No matter when electricity was finally installed, Clifton, Rowe and Kerlick all echoed the same sentiment: life was better.

“It made living much more comfortable,” Kerlick says. “It was great to have a light on and not have to stumble around the house. You could go home and study without using a candle or lantern.”

The trio talked about using the electric iron instead of a cook iron warmed on a stove. They detailed an increasing number of electric tools that made farm work faster and safer. And then there was the radio that no longer required batteries. Rural life was running on electricity, but shepherds were required to ensure the energy continued to flow.

“The reasons for the formation of cooperatives are still the reasons why co-ops exist today,” Lee says. “It will never be profitable to run electricity to rural communities, so we join together and make it work. Electricity is critical for our livelihoods and society.”

The Phelps family legacy certainly speaks to this passion for promoting rural electrification. Clifton’s uncle John began serving on the Caddo Electric board (now CKenergy Electric after it merged with Kiwash Electric) in 1941, helping spearhead growth through the war and post-war years. Clifton’s father, Julian, replaced John on the board in 1951.

Clifton recalls her father attending meeting each month and traveling to conventions. Beyond the farm work and church responsibilities, the cooperative board was his main outside activity. He would serve for more than 30 years.

“He was a champion of electricity,” Clifton says. “It was very important to him. He saw how much easier life was for mother, for the family as a whole. He wanted that for everyone.”